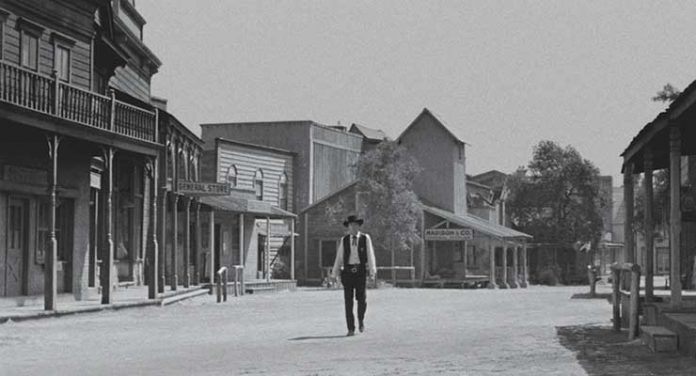 This 1952 western classic stars Gary Cooper as Hadleyville marshal Will Kane, newlywed to his beautiful Quaker bride Amy, played by a twenty-one-year-old Grace Kelly in only her second film role and twenty-nine-years younger than co-star Cooper.

The film is shot in real time, so its eighty-five minute runtime ticks down with an intense sense of realism paced in the actual timeframe in which the story takes place that is heightened by the use of tight camera work and the persistent symbol of a clock ticking down. High Noon was caught up in the red scare McCarthyism of the 1950s. Writer Carl Foreman, whose blacklisting was only temporarily spared by rabid anti-communist Gary Cooper, would fall to the blacklist of the House Un-American Activities Committee. John Wayne, who ironically accepted Cooper’s Oscar award in absentia for his role in High Noon, said the film was the most un-American western he’d ever seen, and director Howard Hawks, another right-wing Hollywood anti-communist hated High Noon so much, he felt compelled to “answer” it with his own film, Rio Bravo. Despite all the shocked sentiments from the anti-communists, High Noon has gone on to be one of the most lauded and enduring westerns ever filmed.

Also ironic is the fact that the story’s protagonist, Will Kane, plays out in fiction the story of the isolated and abandoned hero who must resist oppressive forces, a story that directly mirrors that of writer Carl Foreman’s real life tribulations during the blacklist era. 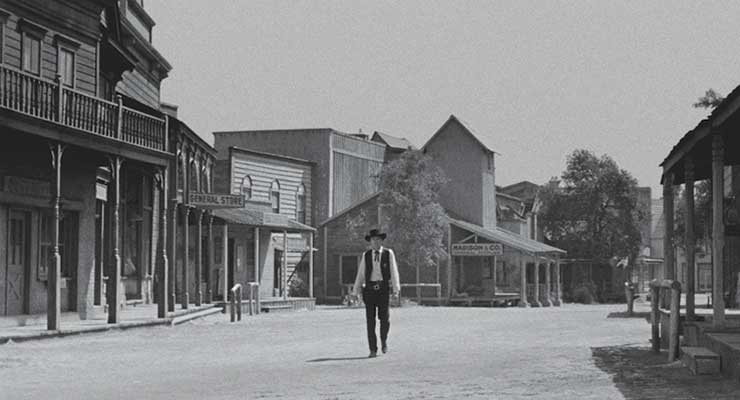 High Noon has been mastered from a new 4K restoration and brought to Blu-ray in an AVC 1080p encodement by Olive Films. In a word, it’s stunning. This is the best transfer from Olive Films I have seen to date, bar none. The black and white cinematography looks gorgeous, the film grain is beautiful and organic, thinly layered and consistent, blacks are inky without crushing. The textures throughout are breathtaking. One can spot every bit of stubble on the faces of Gary Cooper and Lloyd Bridges.

The monaural soundtrack is offered up in a clean sounding DTS-HD Master Audio 2.0 track. There is very little dynamic range, but given its age, it sounds quite good. Clipping and pops aren’t an issue.

We get an excellent selection of supplements, all in HD, that delve into the history and production of High Noon. Particularly of interest are the featurette Imitation of Life that explores the film’s connection to blacklist-era politics, and the visual essay Oscars and Ulcers narrated by the late Anton Yelchin.

From its stark black and white cinematography to its steely hero of determined convictions and real-time story arc, High Noon was an innovative film that spanned a few genres, — western, drama, thriller, action, even noir. This Olive Signature 4K restoration release is a fantastic way for cinephiles and videophiles to watch it. Bravo!