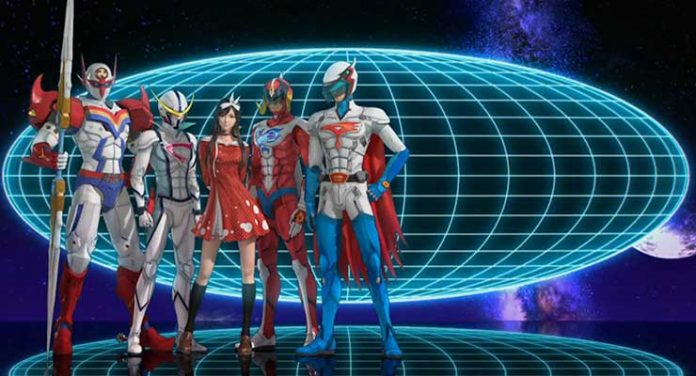 As the series begins, Gatchaman leader Ken the Eagle is facing off against some strange enemy when we are then introduced to Emi, a sad schoolgirl who takes high risks with her life seemingly not concerned if she lives or dies. When she is struck with a beam of light, she obtains a pencil-shaped object with the power to create and destroy whole worlds. This makes her the target of an enemy named “Z”. The series also incorporates the heroes Tekkaman/Jōji Minami, Polymar/Takeshi Yoroi, and Casshan/Tetsuya Azuma into its world. They all surround and protect Emi as she has possession of the object being called “The Case”.

The animation for Infini-T Force is 3DCG and in my opinion, it lacks the finer details of the hand-drawn and 2D animation. The series’ cell drawn predecessors from which the characters are drawn contain some of the most groundbreaking and influential animation works, but here they seem to be drained of their unique characteristics. There are only some rare moments during some of the action sequences where the CG standouts. The 3DCG in Japan is not quite there yet in the way it is in the United States with companies like Pixar or DreamWorks Animation, although some production houses are getting quite close to matching the quality of 2D, like Polygon Pictures with a lot of their “Netflix Original” productions.

Overall, this multiverse crossover sticks pretty close to the playbook for this sort of series. The MacGuffin here is, “The Case,” with its oddly on the nose name, and various tropes are thrown together into one stew. The characters all living together, the loner teenager who was living on her own, the heroes doing battle against the nefarious enemy and strange creatures – even a little mecha and a puppet master ultimately pulling the strings. The arc resolves satisfactorily, but this is a series where the parts are greater than the sum.

Infini-T Force comes to Blu-ray in a 1.78:1 AVC 1080p encodement of its digital 3DCG animation. The inherent resolution of the animation doesn’t always look too great – it can be a bit soft, show some noise and motion artifacts, but colors are vibrant.

Infini-T Force comes with the Japanese audio mix and English dub in DTS-HD Master Audio 2.0 stereo. The sound is excellent, with wide panning, good dynamics, and balance of sounds.

There’s not much compelling included here. A couple of art galleries and the obligatory clean ending, and additional Viz trailers are all we get.

An interesting series and one that otaku will likely feel compelled to check out given its pedigree, but this is one where the hype is greater than the end result.

Infini-T Force: The Complete Series is out on Blu-ray September 10, 2019 from Viz Media

3.2 / 5 TheaterByte Rating
{{ reviewsOverall }} / 5 User Rating (0 votes)
TV-14TV Rating
Tatsunoko | Digital FrontierAnimation Studio
Viz MediaDistributor
Suzuki KiyotakaDirector
Ono ToshiyaWriter
276 Mins.Run Time
10 September 2019Release Date
$44.98MSRP
1.78:1Aspect Ratio
AVC 1080pVideo
Japanese DTS-HD MA 2.0 StereoAudio
English DTS-HD MA 2.0 StereoSecondary Audio
EnglishSubtitles
The Story
The Animation
The Video
The Audio
The Dub
The Supplements
Summary
The depressed and thrill-seeking Emi is thrust into an interdimensional attack and a band of mysterious heroes from various lost worlds arrives to save and protect her in this crossover anime series that brings together characters from the classic 1970s anime series Science Ninja Team Gatchaman, Casshan, Hurricane Polymar and Tekkaman: The Space Knight. The 3DCG production robs the series of some of the detail that made the originals so great, but fans will likely want to check this anime answer to The Avengers anyway.
What people say... Login to rate
Order by: