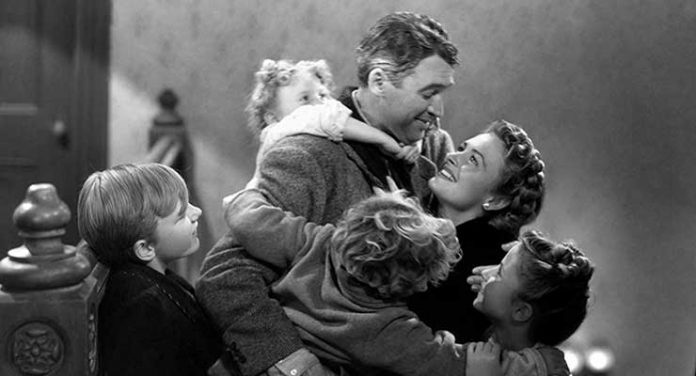 Frank Capra’s perennial holiday classic It’s a Wonderful Life hardly needs an introduction at this point. The 1946 drama beloved by families the world over and a mainstay on television screens every holiday season starred James Stewart as George Bailey, a man who’s had a fanciful imagination and dreams of adventure since boyhood. Through various circumstances out of his control, George must set aside his dreams of traveling the world and seeking adventure to run his late father’s small-town bank in Bedford Falls and protect his business and the townsfolk from the avaricious businessman Mr. Potter (Lionel Barrymore). But when a costly mistake pushes George to greatest depths of despair, an angel is sent to show him what life in his little town would have been like had he never existed. George is shaken and awakens to realize that, despite all his pitfalls, he has indeed had a wonderful life, with a wonderful wife (Donna Reed) and children, and a wonderful group of friends.

The film was not a success upon its release, a bit of a box office failure and not very well-liked by the critics despite garnering 5 Oscar nominations. A slow turnaround came over the years as it maintained a cult status and eventually was allowed to lapse into the public domain, which is when it really took off. Television rescued the film, making it impossible to escape around the Christmastime festivities and New Year’s Eve.

But there is a lot more to It’s a Wonderful Life than simply being a feel-good holiday film. There is an undercurrent of darkness that permeates the film and that is perhaps why it has been able to survive for so many decades. It peers into the stresses of the middle class, the class distinctions and income inequalities bubbling up between the two World Wars, that would only be briefly addressed in the immediate aftermath with the Post-World War II boom, before being scaled back only a decade or two later.  It examines despair, suicide, domestic discontent, financial ruin. The film is now firmly a part of the popular culture

According to the press release, It’s a Wonderful Life was painstakingly restored for over a year utilizing the original nitrate negative as well as two fine-grain masters made in the 1940s. Each element was carefully scanned with the latest technology to both preserve the original delicate negative and create the best possible digital image. 13 of the 14 original reels of the original negative survived, but portions had begun to deteriorate so the best image was selected on a shot-by-shot basis.

What we are presented with on the 4K Ultra HD disc is a 1.37:1 HEVC 2160p (4K) encodement with Dolby Vision (compatible with HDR10) that is just shy of a miracle. I had already seen this film streamed in 4K with Dolby Vision via iTunes on my Apple TV 4K, so I knew what to expect. I was still surprised at how crisper and cleaner the disc looked. Both of my displays, be it my primary reference display (LG OLED) or secondary display, (Toshiba Fire TV w/ Dolby Vision) both support Dolby Vision, so that’s the only HDR format I saw this film in. The black and white imagery is given an excellent amount of nuance in shadows and an added bit of contrast by the Dolby Vision. No, you don’t that dazzling ‘pop’ you see in contemporary films or nearly innumerous shades of color, obviously, but the shades of grays, whites, and blacks are better delineated.  We also see a little more sparkle in lamplights and headlights of cars. The film grain is rather consistent and organic throughout even as detail remains crisp, apart from the few frames that are from slightly lower quality sources that themselves have been blended in brilliantly.

It’s a Wonderful Life comes with a Dolby TrueHD 2.0 mono audio track. This isn’t going to blow up your sound system, but it is authentic and fairly clean, with intelligible dialogue and very little evident pops, clicks, or hiss.

The on-disc supplements for It’s a Wonderful Life are few, but they are solid features that offer up a lot of information on the film and its restoration.

It’s a Wonderful Life has never looked better. The film is a classic that just about everyone loves so, ahead of this holiday season, I highly recommend picking up this disc even if you already own the digital version that has been available, because this one is a step up in visual quality still.

It’s a Wonderful Life is out on 4K Ultra HD Combo October 29, 2019 from Paramount