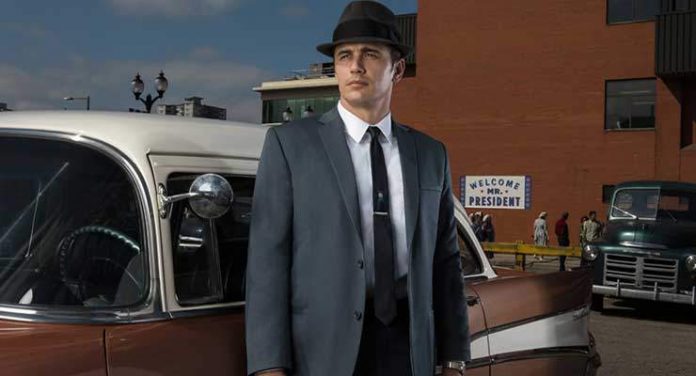 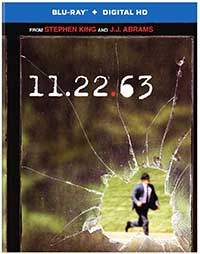 When this eight-episode collaboration between Stephen King and J.J. Abrams aired as a Hulu Original mini-series, beginning on February 2, 2016, it featured a strong cast and an interesting “what if” question. What if someone could travel back in time and prevent President John F. Kennedy’s assassination on 11/22/1963, how would America’s history have been changed? Jake Epping (James Franco) is a divorced Maine high school teacher who finds a “rabbit hole” to the 1960s in Al Templeton’s (Chris Cooper) diner. Too ill to time-travel himself, Templeton convinces Jake to return to Dallas on the fateful date and prevent JFK’s murder. Al provides him with an alias “Jake Amberson,” some cash, and a notebook with important events of the era. Before leaving, he warns Jake, “the past doesn’t want to be changed.”

On Jake’s first trip to the 1960s, a recurring character, the Yellow Card Man (Kevin J. O’Connor), also cautions him about trying to change the past. Later, Jake hooks up with a troubled young man Bill Turcotte (George MacKay) whom he had met on a previous trip to the past. The pair drives to Fort Worth, Texas to conduct round-the-clock surveillance on Kennedy’s would-be assassin Lee Harvey Oswald (Daniel Webber). Once ensconced in the apartment below, the two men get to know Oswald’s Russian wife Marina (Lucy Fry), and “friends” like Russian expat George de Morenschildt (Jonny Coyne). “Amberson” starts teaching at a local high school where he meets lovely school librarian, Sadie Dunhill (Sarah Gadon). Their affair becomes pretty torrid, and Jake eventually confronts Sadie’s nasty husband John Clayton (T.R. Knight). As 11/22/63 approaches, obstacles continue to be placed in Jake’s path to change history.

Time travel can be awkward but fortunately, after the third episode, the action is set mostly in the past until a final installment eventually returns us to the present. Does Jake Epping succeed in saving President Kennedy? Does he generate his very own “butterfly effect ”with its unintended consequences? Stephen King manages to keep a few surprises up his sleeve until the series’ finale.

The 1080p Blu-ray disc is better than the Hulu Originals streaming version that itself was pretty darn good due to the use of Red Epic Dragon cameras and high-resolution lenses that yielded Red Code Raw 5K and 4K source and a Digital Intermediate 4K master. Black crush is noticeably less, contrasts and colors are more realistic and motion artifact is limited. Adam Suschitsky (The Deep) and David Katznelson (Downton Abbey) provide cinematography that effectively keeps our attention focused on the action (of which there is plenty).

The DTS-HD Master Audio 5.1 soundtrack is far more effective than the stereo version of the Hulu Original mini-series, particularly in its use of discrete sound effects in the action scenes.

The two-disc set includes a Digital HD Ultraviolet download of the series, a program leaflet with chapter and credits listings, and one special video feature:

After Jonathan Demme (Silence of the Lambs) pulled out as the writer, director, and producer of the 11.22.63 project, the Hulu network managed to recruit a pretty strong artistic and production team: J.J. Abrams (Person of Interest, Lost, Alias) as executive producer, Bridget Carpenter (Dead Like Me) as a scriptwriter, and James Strong (Broadchurch) as a director. The main strength of this series remains its meticulous recreation of the sights, sounds, and social mores of a bygone era. When I originally reviewed the Hulu streaming version last spring, I had been somewhat disappointed in its character development and the deliberate pacing of much of its storyline. Returning to this series, I received a more favorable impression on both of these accounts; still, this show would have benefited from fewer distracting subplots and less hackneyed dialogue. Putting any such reservations aside, 11.22.63 will manage to pique many viewers’ interests as the venerable sci-fi device of time travel is used  to answer another big “what if” question.