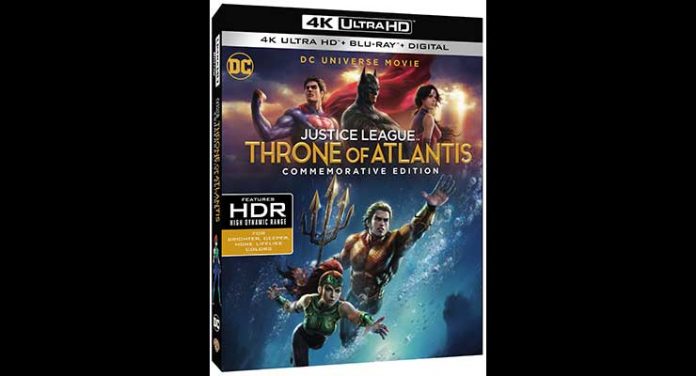 Justice League: Throne of Atlantis, from the graphic novel, tells the origins of Aquaman and the Justice League. Although this DTV film from DC Universe Movie slightly changes the details slightly, it’s still a good watch. The film focuses mainly on the emergence of Aquaman/Arthur Curry (Matt Lanter), who is a drifter strangely drawn to the sea who has been raised by a single father who always told him his mother abandoned them when he was little. But Arthur soon finds out there’s much more to the story and that he has a powerful legacy – he is half Atlantean and heir to the throne of Atlantis, the land beneath the sea. When Arthur’s malevolent half-brother Orm (Sam Witwer) kills the mother Arthur never had a chance to know, Arthur, who discovers he has powers to control sea creatures, must join with a new ally from Atlantis, and members of the newly formed Justice League, which includes Superman, Batman, Wonder Woman, Shazam, Green Lantern, and The Flash, to help stop Orm from starting a war with the people of the land.

Filled with plenty of action, sibling rivalries, unexpected betrayals, and just enough comic relief to keep it from being all doom-and-gloom, this Justice League: Throne of Atlantis is an enjoyable film that should please readers of the comics and fans of DC, and keep people wondering why DC can consistently get it right, or close to it anyway, with their DC Universe DTV animated movies, and strike out so dismally with their DCEU live action franchise.

Warner has remastered Throne of Atlantis in HEVC 2160p (4K) with HDR10 high dynamic range with a maximum of 4000 nits and a minimum of .005 nits. Framed at 1.78:1, the colors thanks to the wide color gamut look brilliant and the wider dynamic range give the highlights excellent ‘pop’, but the detail is lacking. We can see a lot of color banding and some noise and softness.

The included special features give an overview of the Justice League and Aquaman as portrayed in the DC comics, making ofs, and more.  It’s a boon for DC fans. See below for details.

This “commemorative edition” of Throne of Atlantis is packed with special features and gets a good 4K with HDR transfer that is hindered only by the upscaling of the video. Everything else makes this a worthy addition for collectors.