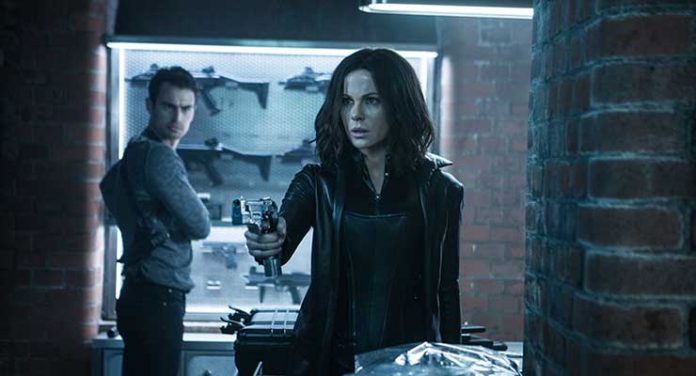 Oh, Kate Beckinsale, there once was a time when, as a healthy young heterosexual male I was more than excited to watch you don your skintight S&M gear as Selene the death dealer and kick some werewolf hinds in the original Underworld. Now as a not quite as young hetero-male, seeing you in Underworld: Blood Wars barely gets a rise out of me. Believe me, it has nothing to do with you, Ms. Beckinsale, you are still a knock ‘em dead undead vampiress, it’s just that this entire franchise has become more undead than alive.

As I watch this elaborate goth dungeon sex party play out where all the vamps are clad in their black designer latex and leather and the lycans (AKA werewolves) in their hobo chic, I can’t feel anything over the story about your character Selene trying to keep her daughter and her powerful hybrid blood hidden away from the evil werewolves or vamps that might want to use it for bad things. Yawn. Oh, um, excuse me. What was that about another female vampire carrying on a secret affair with this Marius (Tobias Menzies), leader of the lycans? And why does your clan of vamps hate Selen so much again? Oh, yes that impossible to follow round up at the start of the movie told us about the four previous films.

I know you were surrounded by some really strong cast members in Blood Wars like Charles Dance (Game of Thrones), Lara Pulver (Da Vinci’s Demons) and Tobias Menzies (Outlander), but rather than make this one of the best films in the franchise (there hasn’t really been a very strong one since the original, honestly), they only make me ask, how did they all get suckered into this tired film? Can you please get back to films like Much Ado About Nothing or The Aviator and leave this franchise alone? 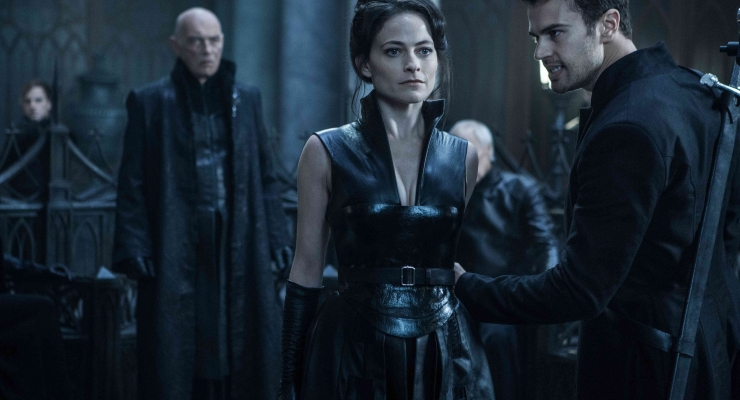 Underworld: Blood Wars was shot on the Red Weapon Dragon at 6K resolution and a 4K DI was used for processing and color timing, so this 4K Ultra HD release is as pure as it gets in its HEVC 2160p encodement with HDR (HDR10) High Dynamic Range framed at 2.40:1. Unfortunately, the image, as has always been the case with Underworld, is really dark, but is seems exceptionally so this time around, so much that the black Gothic outfits of the vampires often dissolve into amorphous blobs – the HDR doesn’t help much there. It does help to bring out some of the visual effects nicely like torches and the sheen on swords and the brightness of the UV bullets. The darkness isn’t the worst of this transfer, however. There is some pretty awful and obvious color banding that can be spotted. Check out the dark night sky around the 47-minute mark in the scene with Selene and David. I know it’s not my display (LG OLED65E6P) or player (Oppo UDP-203), since the OLEDs don’t suffer from banding and changing bit depth on the output of the player from 12 to 10 doesn’t resolve it, so it must be inherent in the source. The original Underworld on Ultra HD looks far better, even with its purposely gritty look that some may take exception to.

The English Dolby Atmos mix for Underworld is a solid one that is atmospheric, has low-end extension that really rocks the floorboards, and good use of the Atmos channels for discrete effects. There are a couple of moments during the action where some dialogue became a little hard to hear that was perhaps on purpose.

There isn’t much that is required viewing here. The on-disc graphic novel is a cool inclusion.

Underworld: Blood Wars proves once and for all the franchise powered by the always and continuously lovely Kate Beckinsale, is just out gas and out of ideas. Some die-hard fans will love this entry, but for most it will be a painfully dull and confusing film to sit through.