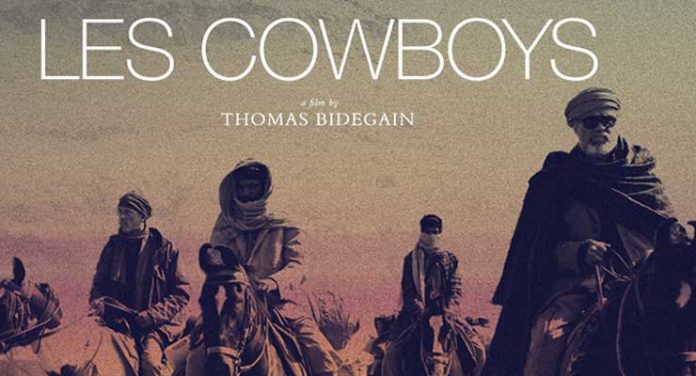 The writer and actor Thomas Bidegain, known for 2009’s acclaimed A Prophet, makes his directorial début with this powerful film that traffics in fear, paranoia, and distrust.

Les Cowboys begins under the big skies somewhere in Eastern France. Alain (François Damiens) is celebrating at a festival with his family; American country music, a dance with his 16-year-old daughter Kelly, all seems fine. But when Kelly disappears, happiness turns to despair and desperation. He finds out his daughter has dated an 18-year-old Muslim guy, Ahmed (Mounir Margoum), and she’s converted to Islam. It’s never explicated stated in Bidegain’s film or in the screenplay, but the implication is Alain fears Kelly has been radicalized and kidnapped by Ahmed. Thus begins a long, arduous, and seemingly endless journey undertaken by Alain and his then 13-year-old son Georges, whom everyone calls “Kid” (played as an adult by Finnegan Oldfield) in search of Kelly. The search takes them to strange, unforeseen places, and when Alain can no longer search because of a shocking twist of events, Kid takes up the endless search.

With the mood in France today given the numerous terrorist attacks, rising right-wing groups and Islamophobia (things by no means limited to France), Les Cowboys sets itself up as a film most apposite to contemporary issues. It draws on the growing global unease over that ever looming encroachment of “the other” taking over, or stealing what is dearest to us. This is physically embodied by the loss of Kelly, whose presence lingers in Les Cowboys and the implication that she has been brainwashed or kidnapped by the unwanted Muslim (a scene in the final act of the film in which a Pakistani Muslim woman has her headscarf ripped from her by an angered Frenchwoman is the only explicit voice given to the conflict between cultures.

Bidegain excels in giving Les Cowboys both a feel of immediacy and a sense of mystery and epic sweep, handling its 104 minutes with an adeptness of taut storytelling and precision. The big skies of the opening scenes collapse into confined spaces, indoor anxieties, discussions in cars, and nighttime shadows, before opening up again in act three when the film finally offers a release and turns toward more optimism. 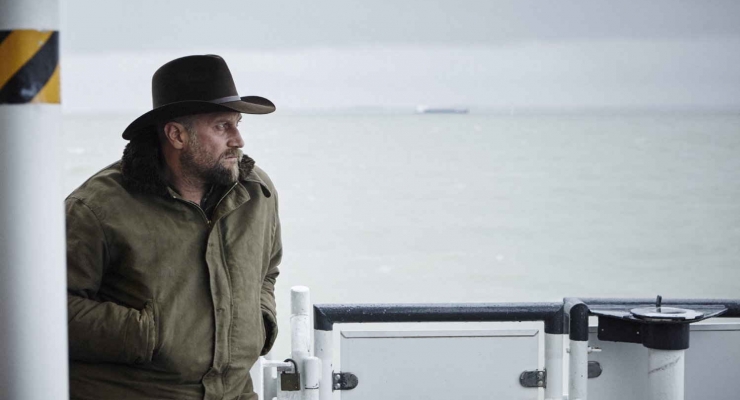 Les Cowboys was shot in HD on the Arri Alexa in the anamorphic format and brought to Blu-ray in a 2.35:1 framing in an AVC 1080p encodement by Cohen Media Group. The image looks very filmic and could almost pass for 35mm at times, particularly in the final act when it shifts to North Africa. It is crisp, clean, and three-dimensional with good contrast and nuance in the shadows, although there is some subtle crush in the darker areas at times.

This is another Cohen Media Group Blu-ray release that comes with both a lossless and lossy 5.1 mix. French DTS-HD Master Audio 5.1 and Dolby Digital 5.1 tracks are included, but, like the recently reviewed Diary of a Chambermaid, the lossless DTS-HD MA track seems to have had its mastering level and the mid- and upper- low-end boosted by a big margin over the lossy Dolby Digital track. This takes away some of the dynamic range and makes it sound a more “in your face”, but not necessarily natural. The mix is subtle, but has good balance of effects and the moody score. Dialogue is clear and absent of clipping. The lossy track sounds a little more relaxed, but, again, doesn’t sound as natural in the higher frequencies, adjusting for volume levels (about a 15db decrease in typical listening level).

There isn’t much offered here, but the over half-hour-long French-language “making of” does supply some interesting information while including lots of behind-the-scenes production footage.

A stunning and poignant début by director and writer Thomas Bidegain, Les Cowboys is a film from a director who will hopefully have a lot more to say in the years to come. Its subject is pertinent to the world we live in today, the acting is gripping, the visuals are stunning, and Cohen Media Group’s Blu-ray presents it all superbly.