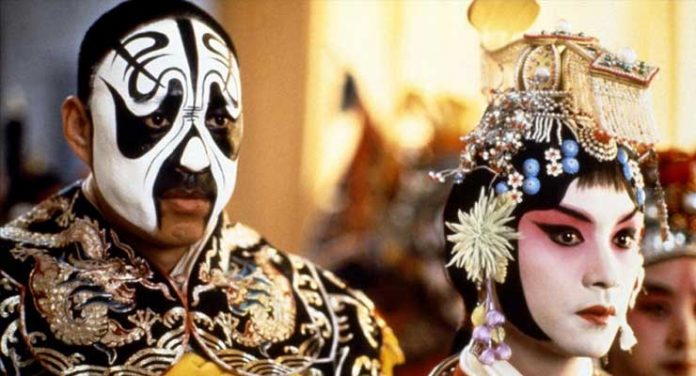 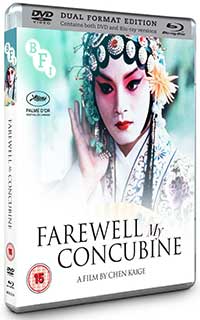 The 1993 Chinese epic from director Chen Kaige, Farewell My Concubine, based on the novel by Lillian Lee, charts the tumultuous 50-year relationship between two men, Cheng Dieyi (Leslie Cheung) and Duan Xiaolou (Zhang Fengyi), who meet as boys at the training facility of a Peking Opera master and grow to become two of the greatest performers of the classic Peking Opera Farewell My Concubine, the tragic story of a Chu king who loses his kingdom to the Han king and is left with nothing but one horse and one concubine. Over the span of their relationship, the two see the invasion of China by Japan, the rise and fall of the Manchu, the rise of the People’s Liberation Army, the communists, and the Cultural Revolution.

Farewell My Concubine is an epic exploration of artists’ dedication to their work in the worst of circumstances (at one point, Dieyi who plays the Concubine, is forced to give himself to a male opera patron, dredging up terrible memories of when he was a boy and raped by an old man from the empress’s court who patronized the opera). It also scrutinizes the meaning of sexuality and friendship. Again, Dieyi is made from the time he is young to take on feminine attributes to play the perfect concubine, but in one of the most stunning turns in the last act of the film, chastised and humiliated for being a suspected homosexual. The battle, push

and pull between the less refined Xiaolou and Dieyi, especially once the latter finally marries a prostitute (Gong Li) from a famous Peking brothel is the driving force in Farewell My Concubine. These two men thrown together through the most unfortunate of circumstances (Dieyi was abandoned to the training house by his mother, who was herself a prostitute) are seemingly unalike in every way, but it is the dedication to the art form of the opera, ingrained in them by their very strict, very brutal tutor, and their sense of brotherhood that keeps them together.

The production in the film is awe-inspiring, from the traditional Chinese garments that play an almost unspoken role in the film, to the traditional music and the sound design that helps tell the mood and time the story has shifted to. Chen keeps what could have been an unwieldy film together and makes it feel almost effortless, while the actors keep us enthralled in their on-screen saga.

Farewell My Concubine arrives on Blu-ray in a 1.85:1 framed AVC 1080p encodement on Blu-ray from the BFI. The image looks natural and has a lot of grain that is not necessarily obtrusive, but does give in to a lot of softness and the picture does not always look as crisp as one would like. Colors don’t necessarily pop either. For instance, that vivid yellow costume that Dieyi is famous for wearing in the opera doesn’t scream at you, but has just enough saturation to standout. There are a few issues here and there with some scratches and hairs, but for the most part the film looks clean.

The Mandarin soundtrack is supplied in a beautiful, widely panned LPCM 2.0 (48kHz/24-bit). Dialogue is clear and sound effects like birds and crickets almost surround you despite being only in stereo due to the wide imaging, natural ambience, and exceptional dynamic range.

We get an unusually barebones release from the BFI with this edition of Farewell My Concubine coming with only a brief making-of and the DVD of the film. No booklet with extended essay, no trailer, no extra documentaries, audio commentaries or any other typical materials are included. 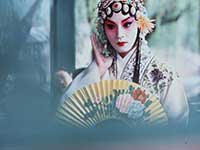 A magnificent film that offers us a look into several of China’s most tumultuous decades through the lens of the traditional art form of the Peking Opera and its dedicated performers, Farewell My Concubine is one of the early, New Chinese Cinema classics, along with Raise the Red Lantern, that helped to elevate Chinese filmmaking. This BFI edition is disappointingly barebones, but still worth owning on Blu-ray.