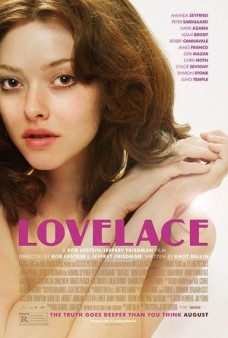 Lovelace shows how the young and innocent Linda went from being the girl next door to the girl who would become the biggest porn star of her generation. And about halfway through the film, Lovelace rewinds the story and tells how Boreman actually saw it happen.
Linda Susan Boreman (an amazing Amanda Seyfried; Epic) lives with her parents in Florida. Her father is a retired NYC cop who works part time as a security guard. Her mother (played by an unrecognizable Sharon Stone; Border Run), as domineering as any mother could be, was very strict with Linda and always told her to please her man, no matter what it involved. When Linda was 20 she met Chuck Traynor, an owner of a bar who was a very intimidating figure. Him and Linda fell in love, but also had no money. One night Chuck videotaped Linda performing oral sex on him and showed it to a couple porn film producers. They liked what they saw and made the film Deep Throat, starring Boreman, who had top billing. Deep Throat went on to earn millions of dollars and made a star out of Boreman, who by this time was going by the name Linda Lovelace. Was she a willing participant in Deep Throat? The second half of the film says that she was not. It goes on to tell a different story, the story that Boreman claims to be the correct version. Boreman (who would go on to become Linda Marchiano in 1974), has said that the abuse she suffered at the hands of Traynor, including the many times he forced her to have sex with other men for money, had made her very unhappy in the relationship. She was so unhappy that she asks her mom if she can move back home, but in a very poignant scene her mom says that no, she should do as he says and to obey him, like she probably did in her own marriage. 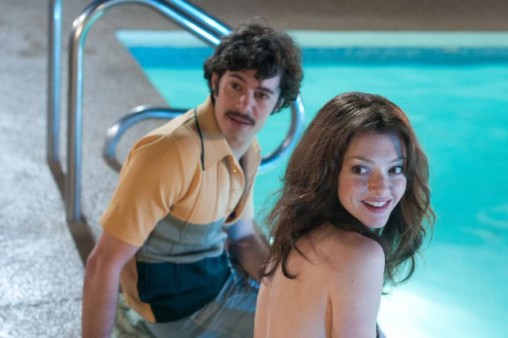 This second half of Lovelace is Boreman’s side of the story in that she claims that she was not responsible for acting in porn films, that she was forced to do so, and at the same time humiliated by Traynor. It goes on to show Lovelace being very emotional, attempting to run away from Traynor, and being forced to have sex with six men in which he gets the payment. Which half of this movie is the actual version of events? This is the question that Lovelace the film does not really answer. While it appears that Lovelace actually loved being a star and being in the limelight during the Deep Throat era, perhaps a few years down the road she regretted ever getting into the porn business (including after an emotional phone call with her father who says he had seen her movie).
Seyfried is the perfect actress to play Boreman/Lovelace/Marchiano. With her large eyes, beautiful curly hair and 1970’s looks, Seyfried perfectly embodies the life of this confused and mentally immature yet very sexy woman. Peter Sarsgaard plays Traynor with fury, anger, and aggression – another domineering figure in Boreman’s life, just like her mother. Stone doesn’t get much to do as Boreman’s mother, conversations with her daughter and not much else. Too bad, as it is a waste of Stone’s talent. If her part were bigger, Stone’s performance could’ve made a bigger impact. Hank Azaria and Bobby Cannavale are perfect as slick Hollywood producers of Deep Throat, and Chris Noth plays the investor who finances the movie. No doubt he was picked for this role because of his role as Mr. Big in Sex and the City. Rounding out the all star cast is the great Debi Mazar as Lovelace‘s co-star in Deep Throat, Adam Brody as Harry Reems, Linda’s male co-star in Deep Throat, and James Franco, who, of course, plays Hugh Hefner. Whether Lovelace is the true telling telling of Boreman’s story or not, it is deeply sad that she is not around to watch this screen version of her life. Boreman died in April 2002 after suffering major injuries in a car crash. Strangely enough, Traynor would die exactly three months later.

[Rating:3.5/5]
Lovelace is now available to buy on Blu-ray and DVD.