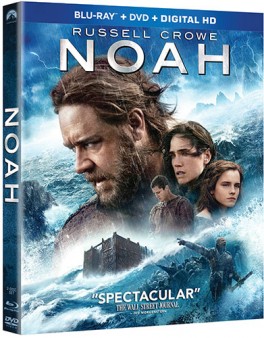 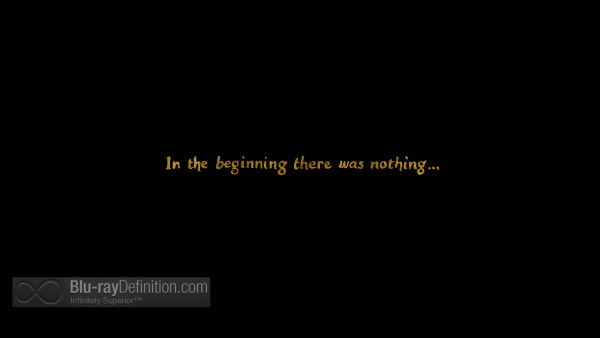 Put away your bibles and relax, Noah is not a fundamentalist interpretation of the traditional story as told in the ancient scriptures by any means. Instead, what Darren Aronofsky’s film gives us is an epic fantasy vision on an ancient mythology.

“In the beginning, their was nothing” so starts Aronofsky’s film before a prologue that tells of how the Creator formed the Earth, the creatures of the land and sea, and then Adam and Eve, placing them in a paradise where they would succumb to temptation and be cast out. Eventually, Adam and Eve would have two sons, Cain and Abel, but in jealous rage, Cain would slay Abel, and be banished. Many years later, after the lineage of Abel had built up an advanced civilization and spread it’s wickedness throughout the world, the last remaining in line of the righteous men, Noah (Russell Crowe, Man of Steel), would stand, with his wife Naameh (Jennifer Connelly, Winter’s Tale) and his three sons Ham (Logan Lerman), Shem (Douglas Booth) and Japheth (Leo McHugh Carroll) the only hope left for mankind and the planet to return the world to a peaceful place.

The peace-loving vegetarian Noah begins to have visions that the Creator will destroy the wicked ones with a great deluge, and he is given a sacred duty to save the animals and his small family, which now includes an adopted daughter, Ila (Emma Watson, This is the End; The Bling Ring) from it. With the aid of fallen angels cast out of heaven as beings of light but now encrusted in stone, Noah and his family proceed to build an ark out of wood with instructions from the Creator. Noah tries to warn the wicked ones, led by the king of the lineage of Cain, Tubal-cain (Ray Winstone; The Sweeney), but they are defiant, violent, non-believers. When the inevitable storm hits, an epic battle is waged between the fallen stone-angels and the wicked ones trying to steal Noah’s ark and save themselves, but Noah is saved and left adrift with his family. He also now believes he and his family were meant to be the last men, that only the animals were to be saved so that the Creator’s world could return to the paradise he meant it to be. Noah’s problem is, his adopted daughter is now pregnant with his grandchild, and if she has daughters, the lineage of humans will continue. The Creator has been silent on what he is meant to do.

Of course, the basics of this story are well known to many around the world. The specifics of what happens during the flood, after the ark settles, how humanity copes aren’t all that necessary in this review, and apparently not so much to Aronofsky either. Instead, the director chooses to paint around the lines with broad brush strokes and give an impressionistic view of the mythology of Noah’s Ark.

The key to enjoying this film is letting go of any religious prejudgments and allowing yourself to enjoy the spectacle. The visual aesthetic of the raging waters, the nod to such fantasy adventures as Lord of the Rings as the giant stone angels battle hordes of wicked humans determined to steal the ark. The surreal visions Noah receives and the flashbacks to the fateful moments in the garden of Eden that would change the future of mankind for ever – these are all breathtakingly realized with both visual and aural success.

Russell Crowe also portrays a wonderfully stoic, self-righteous and yet conflicted Noah, sure of what he has to do at first, but slowly at the edge of losing his faith when he believes his Creator wants him to become one of the murderers he was meant to help destroy. And in a wonderful Shakespearean twist, Anthony Hopkins is cast as Noah’s grandfather Methuselah (said to be the oldest man who ever lived at some 969 years). The berry-obsessed elder statesman adds a much needed air of levity to the overwhelmingly serious nature of the film, but is also seen to be one of the wisest of the characters in the story. 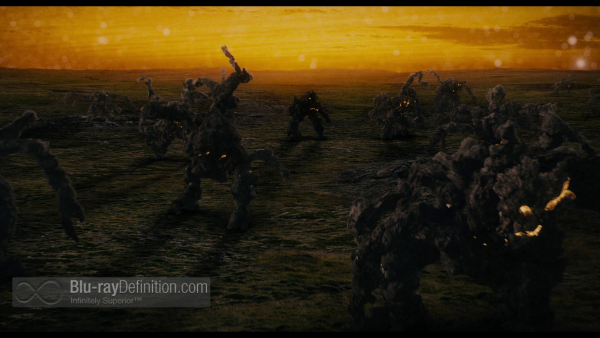 Noah was shot in HD on the Arri Alexa Plus with some scenes shot in the Super 35 format on the Arri LT handheld camera. The end results are amazing for this AVC/MPEG-4 transfer to Blu-ray from Paramount. No fault can be found here in what is a pure image with crisp details, lots of texture, no noise, the finest grain structure in certain scenes, and nicely nuanced shadow delineation. 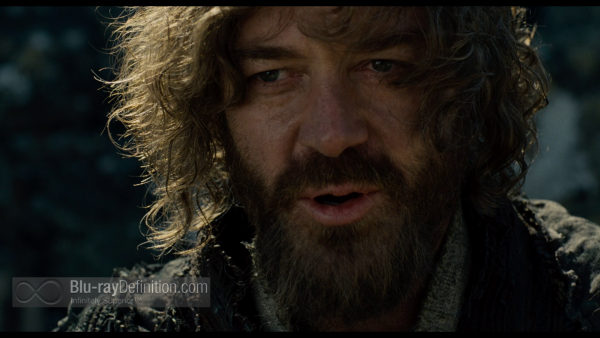 To go along with the amazing visual presentation, the Blu-ray gets a lossless DTS-HD Master Audio 7.1 (48kHz/24-bit) soundtrack that is equally up to task. From the quietest moments to the big event we all know is coming, this soundtrack delivers. There’s a battle sequence as the storm begins and Noah and his family defend the Ark against the “wicked ones”. This sequence in particular shows off the balance of the mix, placing sounds through the room and extending the low frequencies well down in the range. 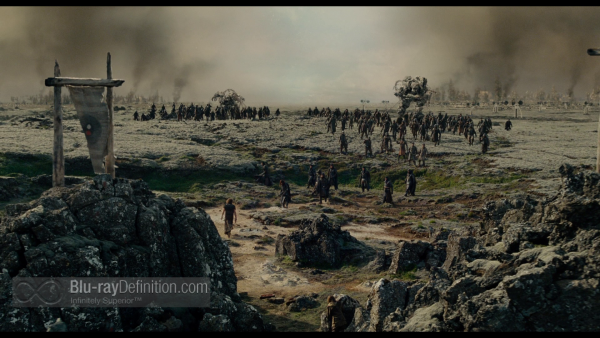 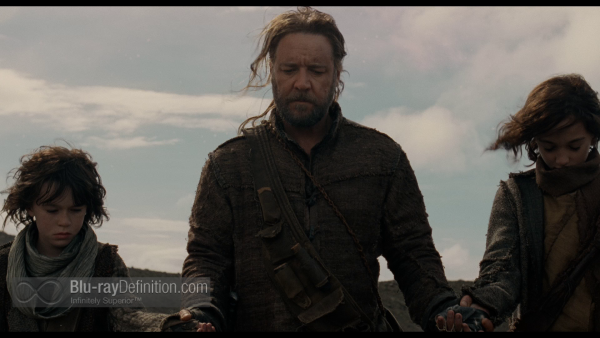 A visual and aural epic that leaves us pondering the meaning of our existence while also taking us on a thrill ride, Noah is an adventure that removes this story from the weighty expectations of its religious roots and makes it a universal and approachable film for anyone of any philosophical leaning, which is not an easy accomplishment. 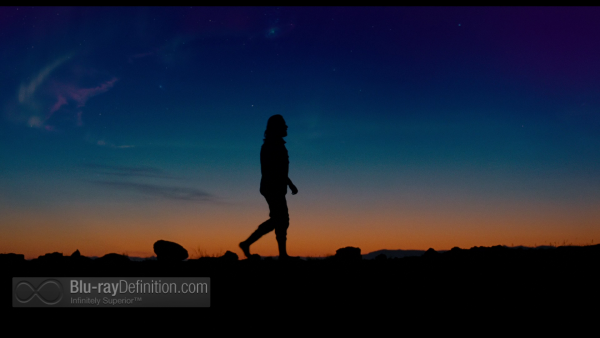 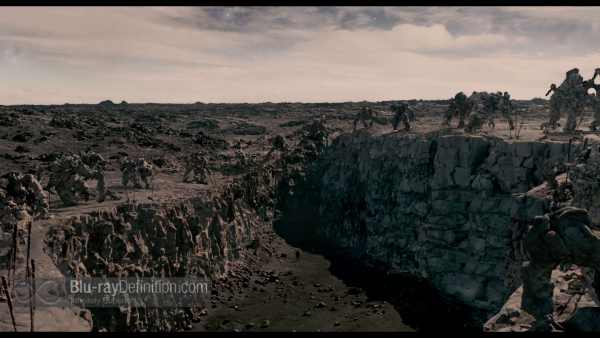 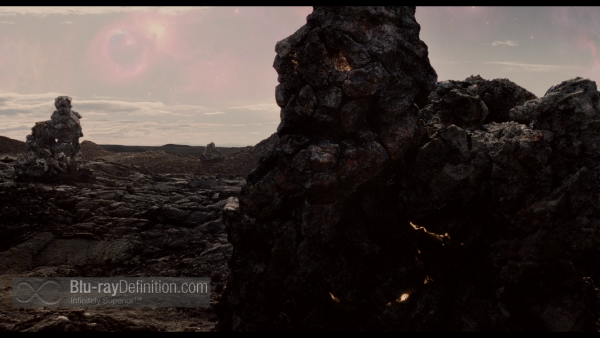 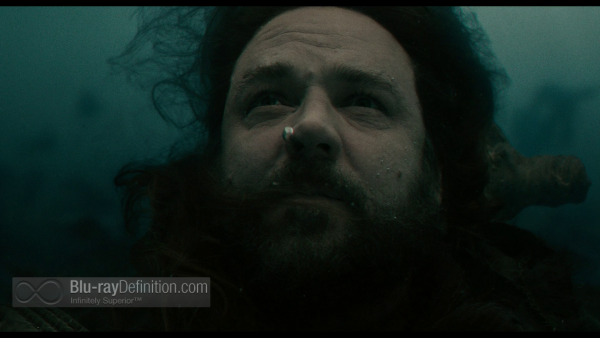 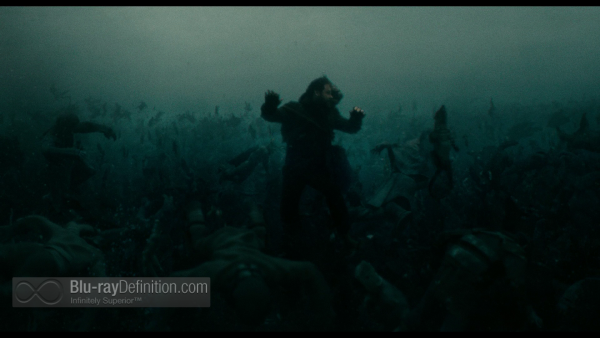 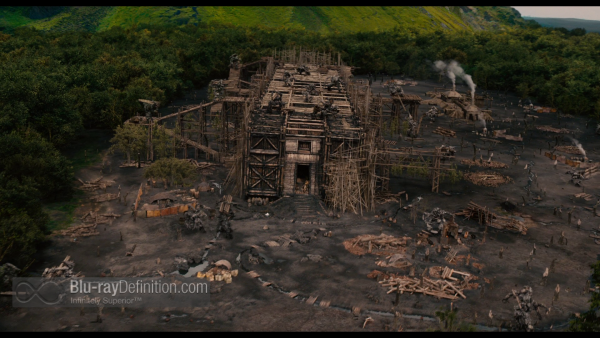 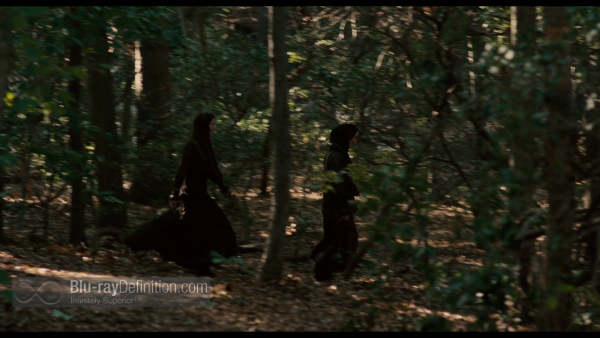 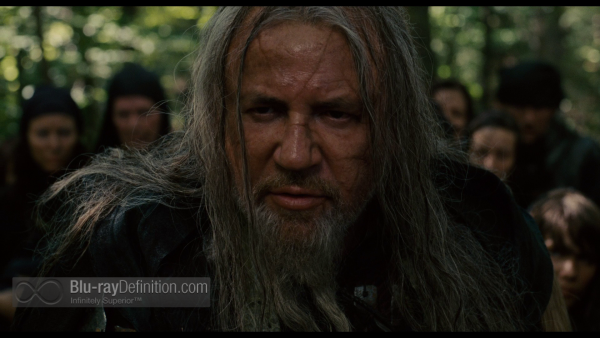 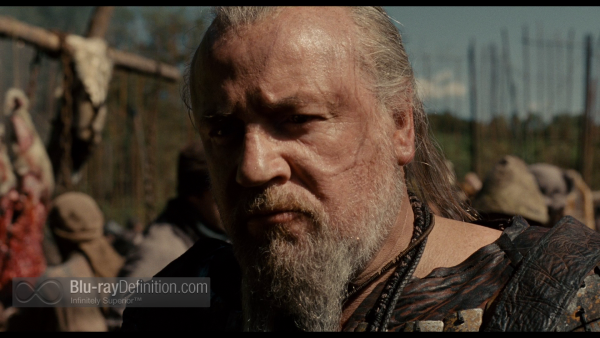 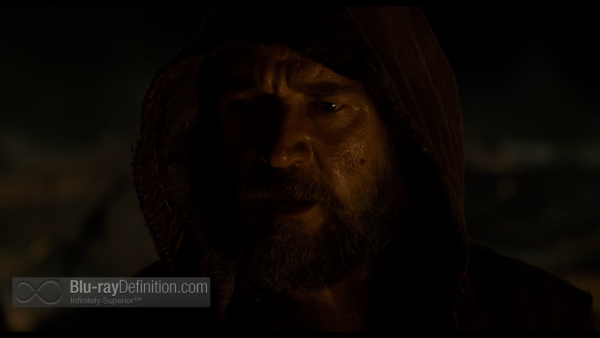 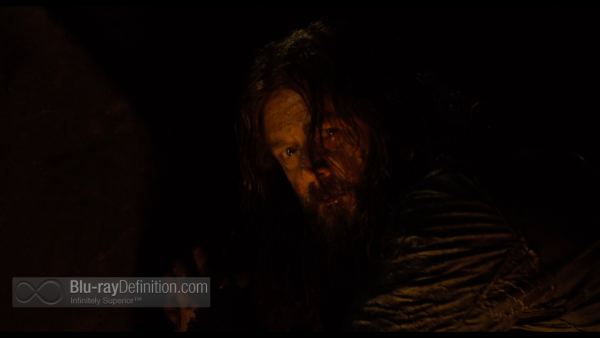 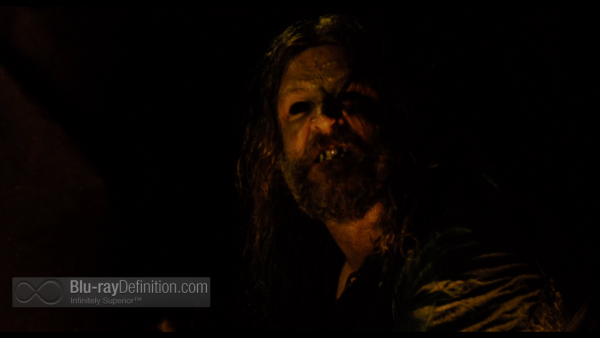 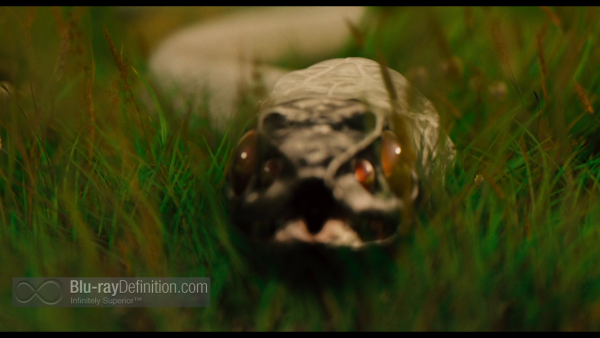 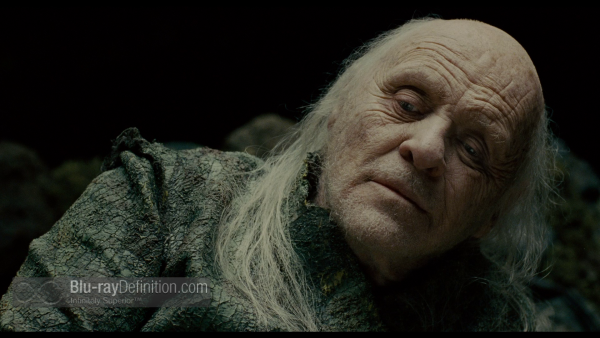 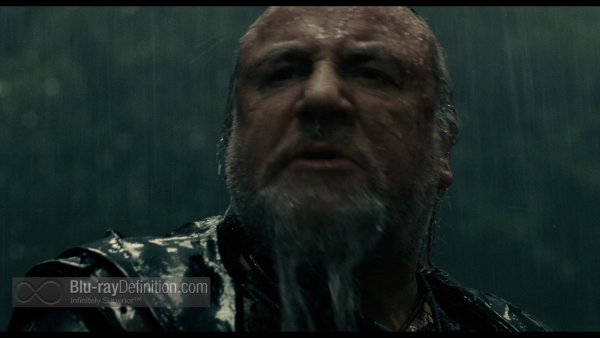 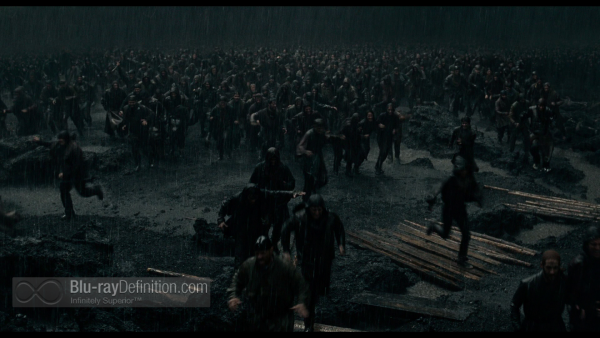 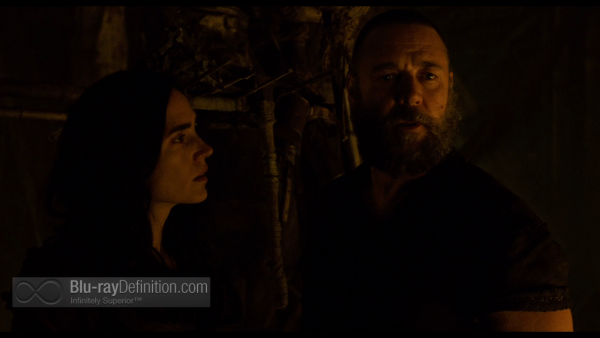 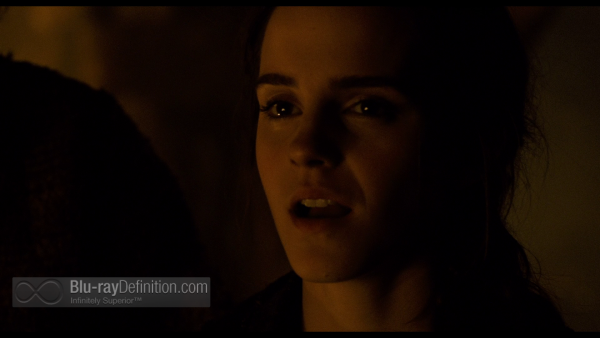 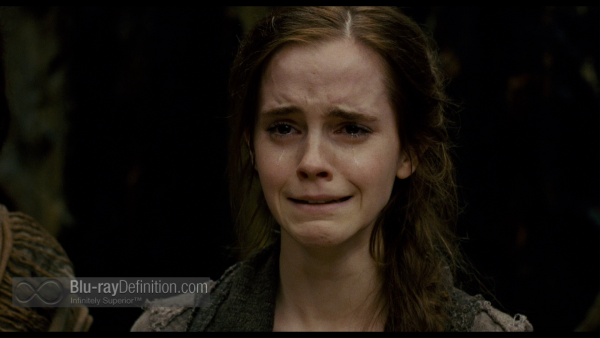 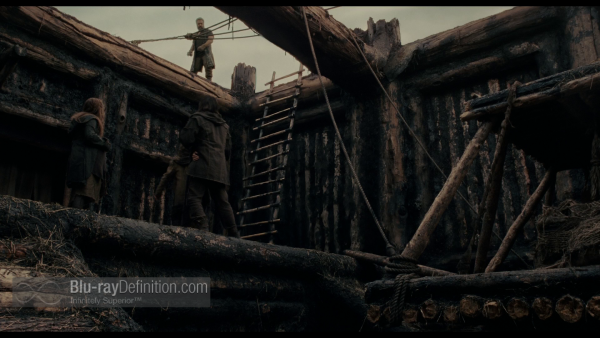 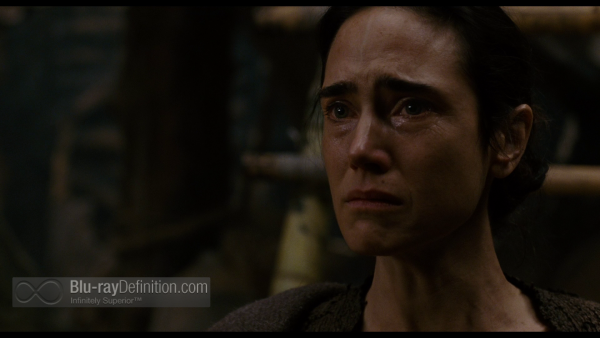 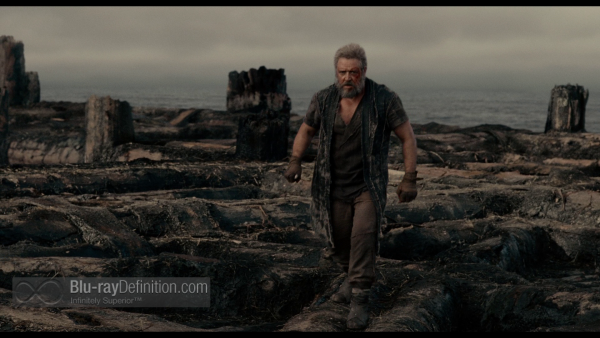 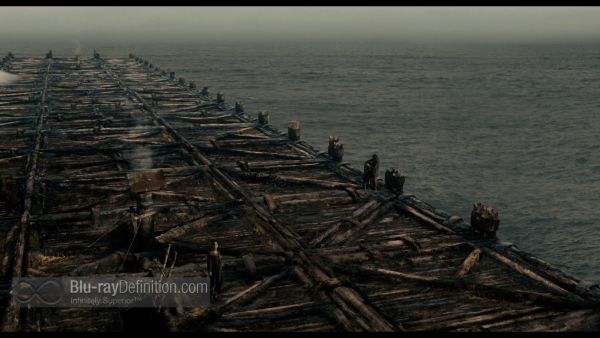 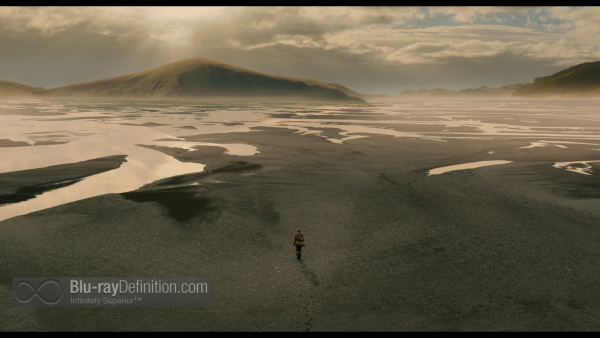