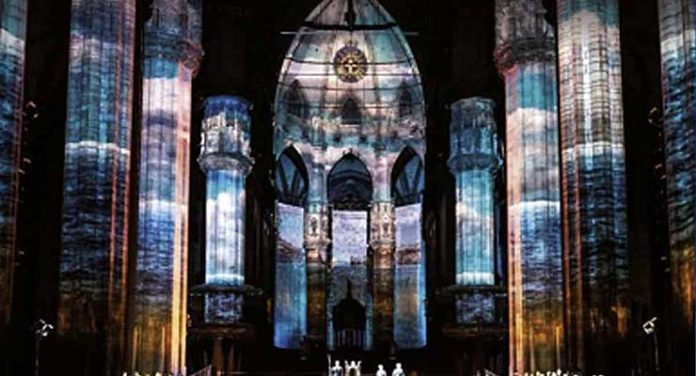 Giachino Rossini’s original opera Mosè in Egitto (Moses in Egypt) was revised with a new French libretto as Moïse et Pharaon (Moses and Pharoah). Most musicologists agree that the latter version is superior as it reflects the composer’s creative growth over the decade that separates these works. Mosè is a condensed reworking of the later opera, translated into Italian and specifically staged for the famous Duomo di Milano. This 2015 production was intended for famed Italian bass-baritone, Ruggero Raimondi. The abridged score and libretto focus on events leading up to the Exodus of the Israelites from Egypt and marginalizes the forbidden love affair between Faraone’s son and Moses’s niece. 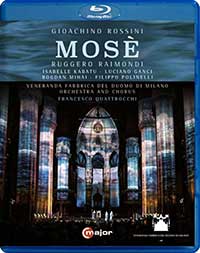 This well-known Old Testament tale opens as Moses (Raimondi) threatens Faraone (Filippo Polinelli) with a series of disasters unless the Israelites are freed. When Faraone refuses, Moses causes darkness to fall over Egypt. Faraone offers freedom to the Israelites if light is restored.  When the darkness is lifted, the monarch insists that the Israelites bow to the gods of Egypt. Moses will have none of this and turns the Nile River into a torrent of blood while locusts descend on the city of Memphis. With his sacred staff, Moses then extinguishes the eternal flames in the Temple of Isis. Faraone orders Moses and his people to be expelled; as they reach the Red Sea, the waters miraculously part and the Exodus to the Promised Land begins.

Other cast members include Bogdan Mihai as Elisero (Aaron, Moses’s brother), Luciano Ganci as Amenofi (Faraone’s son), Giovanni Sebastiano Sala as the Egyptian official Aufide, Lydia Tamburrino as Anaide (Moses’s niece), and Isabelle Kabatu as Sinaide (Faraone’s wife). With the exception of Signor Raimondi, I was unfamiliar with the rest of the principals. This 73-year old Italian bass-baritone may have lost some vocal warmth and power but he still delivers a truly commanding performance on stage. With the exception of the riveting soprano Kabatu, the rest of the female principals are barely adequate. Italian tenor Ganci is a stentorian stand-and-deliver singer; conversely, baritone Polinelli proves a stage-worthy vocal adversary for Moses. Maestro Francesco Quattrocchi does a creditable job in fending off the Duomo’s echoes and eliciting the clarity of orchestral and vocal lines. Unita C1’s visual designs cast some impressive projections on the cathedral’s backdrop, adding much atmosphere to this semi-staged production while the massive columns often serve as curtains.

By intent, the stage is bare and backdrop dark but Valerio Tiberi’s lighting is quite good and we are given decent colors and details. Tiziano Mancini and Cecelia Ligorio direct a fine show with superb videography that largely overcomes that rather static nature of the dramaturgy.

Like most cathedrals, there is obvious sonic decay picked up in the surround channels. The audio engineers have dealt with the inevitable echoes as well as might be expected. The vocal and orchestral balances are excellent and the overall clarity is commendable.

C Major gives us a fascinating 22-minute documentary on the conception and construction of the Duomo di Milano, the site of this program. One appreciates the workmanship that went into this stone and marble edifice that, as the narrator remarks, is built on “pietra e preghiera” (stone and prayer). A program booklet provides cast and production credits, a brief essay on the making of this performance, a plot synopsis and track listings. 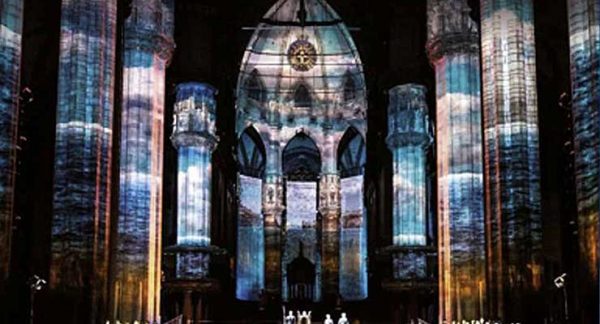 This abridged version plays for about half that of the original, but most viewers will not feel shortchanged as many of the glorious solo and ensemble pieces are maintained. As this is likely to be a unique Blu-ray release of this event, we can be thankful that, previously noted vocal shortcomings aside, we get a noteworthy performance by a great singer in the twilight of an illustrious career and displayed in a setting that is equally remarkable and moving.