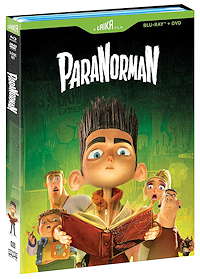 ParaNorman is a stop-motion animated adventure that tells the strange tale of Norman Babcock (Kodi Smit-McPhee), a young boy whose ability to speak with and see the dead has left him an outsider with his schoolmates and even with his own family. At school they call him “AbNorman”, and his father (Jeff Garlin) is at his wits end with his seemingly unhinged behavior. But Norman’s ability will soon be needed to help save his small town of Blithe Hollow from a centuries-old witch’s curse that leaves it under threat by zombies. Will Norman be able to rise to the occasion? He will need the help of unlikely allies like his obnoxious, popularity-obsessed older sister Courtney (Anna Kendrick), his only friend, the chubby Neil (Tucker Albrizzi) and Neil’s muscular but not too bright older brother Mitch (Casey Affleck), and his school tormentor, the cruel but dimwitted Alvin (Christopher Mintz-Plasse).

Directed by Chris Butler (Missing Link) and Sam Fell (The Tale of Despereaux), ParaNorman blends 1950s creature feature horror with contemporary comedy and adventure in such a way that is crosses genres and generations, appealing to many different audiences. From the zombies and witches’ curses to the spooky graveyards or friendly spirits like Norman’s grandma just hanging out in the house, this one touches on so many different horror themes, but does it in a lighthearted way.

At the core of it, however, is the story of a kid trying to find his power, his voice, and his courage to stand on his own. That’s what makes the story of ParaNorman so engaging and heartfelt. When you pair this with the stunning visual work of LAIKA Studios’ stop-motion animation and visual effects, plus the empathetic score from Jon Brion, you get a thoroughly enjoyable and classic film.

The digital stills for ParaNorman were taken on a Canon EOS 5D Mark II in 5K. This edition is “newly restored” according to Shout! Factory. It comes to Blu-ray in AVC 1080p framed at 2.40:1. This is probably the strongest looking of these LAIKA Studios Editions from Shout! with Coraline coming in a very close second, just based on the vibrancy of the colors and the fantastic shadow detail and inky black levels. The primary colors and cool neon colors like glowing greens or electric blues really ‘pop’ in this release. Detail is also superb. One of the finest moments is when Norman first emerges from the dark tree line in the forest. The way you can see the texture of the leaves and the individual trees as the light slowly rises is breathtaking.

ParaNorman has an awesome lossless DTS-HD Master Audio 5.1 mix that has strong dynamic range and natural, solid sounding effects placed throughout the soundfield, with extended low-end and clear dialogue.

Like the other LAIKA Studios Editions, ParaNorman is loaded with new bonus features that will offer hours of information and entertainment. Do listen to the wonderful audio commentary and go through the featurettes on the puppets.

Another brilliant LAIKA Studios release from Shout! Factory that looks and sounds great, this release of ParaNorman is one that I highly recommend should be scooped up, pronto!

ParaNorman (LAIKA Studios Edition) is out on Blu-ray September 14, 2021 from Shout! Factory

Load more
A young boy named Norman who can see and speak to the dead will have to use his powers to save his small town of Blithe Hollow from a centuries old witch's curse in this stop-motion animated horror comedy from LAIKA Studios. Brandon A. DuhamelParaNorman (Blu-ray Review)