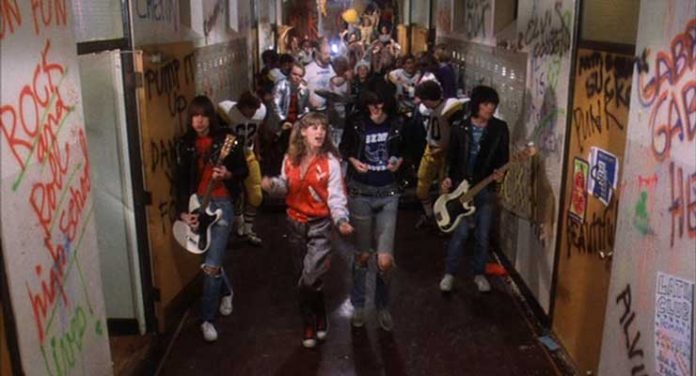 Rock ‘n’ Roll High School is the 1979 musical comedy from producer Roger Corman directed by Allan Arkush. The film, which has attained cult classic status in the years since its release, is pretty much in line with much of the teen school comedies of the era such as Animal House and Fast Times at Ridgemont High, but surprisingly less raunchy given this is from the same filmmaker responsible for Death Race and Piranha.

For many, the film is probably most famous for the title track from the Ramones, and the band does play a big part in the film. The story revolves around the students of Vince Lombardi High who love rock music, but their authoritarian new principal, Togar (Mary Woronov), but leader of the student rock ‘n’ roll rebellion and Ramones fanatic Riff Randell (P.J. Soles) is determined to infuse some punk spirit into the student body – and to go see the Ramones in concert. But when Togar confiscates her tickets, she wins them in a radio contest and gets to the show anyway.

Similar to the film FM, which also ended in a concert and heavily relied on a rock music soundtrack but managed to completely miss the punk rock revolution even though it came out only a year before, Rock ‘n’ Roll High School ends with a rollicking live performance by the Ramones at the Roxy and the ultimate scene of teenage rebellion as the kids at Lombardi wreck their school. How this finale would play today in an era where serious concerns of school violence, mass shootings, and literal mass shooting drills at schools play out is a topic for another time. ‘

Rock ‘n’ Roll High School’s nearly alternative reality, slapstick, and even building up of the Ramones into a supergroup status they never quite attained seems quaint today. While the film is hardly great filmmaking by any means, as a cultural statement that others at the time seemed to be missing it still holds up and is a great popcorn film. And I hear it’s raining cats and dogs in Idaho.

This 40th anniversary edition of Rock ‘n’ Roll High School on Blu-ray is taken from a new 4K scan from the original camera negative. It is brought to Blu-ray in a 1.85:1 AVC 1080p encodement and it looks gorgeous. For a low budget comedy from 1979, the film looks relatively crisp with natural colors, a thin layer of grain and very little source damage present.

Rock ‘n’ Roll High School comes with the original monaural mix in DTS-HD Master Audio 2.0. This sort of film would seem like it presents the perfect opportunity to provide a 5.1 or at the very least a 2.0 stereo mix to go along with the Ramones’ punk rock soundtrack, but the mono mix sounds good here at least, with a punchy mid-range and clean dialogue.

There is only one new special feature included and everything else is a port over and upscaled, still they are well worth watching for the interviews and information the include.

Shout! Factory has offered up an excellent 4K restoration of this cult classic. Whether you are a Ramones fan or just a fan of silly Roger Corman comedies, this is one you should pick up.