Sakura Trick is the 2014 anime adaptation of the Japanese 4-panel yuri manga series written and illustrated by Tachi. It’s a lighthearted slice of life, high school rom-com that centers on main protagonists Takayama Haruka and Sonoda Yū.The two best friends from junior high start their first year of high school, with the somewhat clingy Haruka desperate to make sure that the two girls will be together in class together and be able to spend their whole time in school by each other’s side. What the more boisterous and somewhat childish Yu doesn’t realize is that Haruka has romantic feelings toward her, thus when Yu begins hanging out with other girls, Haruka gets extremely jealous, and Yu proposes to calm Haruka down and reassure her that she is still her best friend, that the two of them do something special together that only they will do. Haruka shyly suggests kissing. What begins as a way to simply settle Haruka’s insecurity turns into a special thing for the two of them, and Yu realizes she has romantic feelings for Haruka as well. From then on, the two can’t seem to stop kissing each other for comfort, even though they want to keep it hidden from their fellow schoolmates and family members, like Yu’s prying big sister and school president Mitsuki, who ends up developing a crush on Haruka too.

Generally, there is nothing very original about Sakura Trick, and the premise of this school where all the girls are in love with each other may have shocked or been considered edgy ten or twenty years ago, but today, when surveys come out showing the number one genre of porn streamed online is in the “Lesbian” category, this is yawn-inducing unless the story is something beyond a bunch of girls who like kissing each other. And it isn’t. Sure, the animation is cute, but it isn’t anything anyone hasn’t seen a million times, if I may be hyperbolic. Haruka and Yu are cute together, and so are their friends, but the comedy in this series and the animation just doesn’t grab one’s attention over the course of 12 episodes like other slice of life series such as Hidamari Sketch or Strawberry Marshmallow. 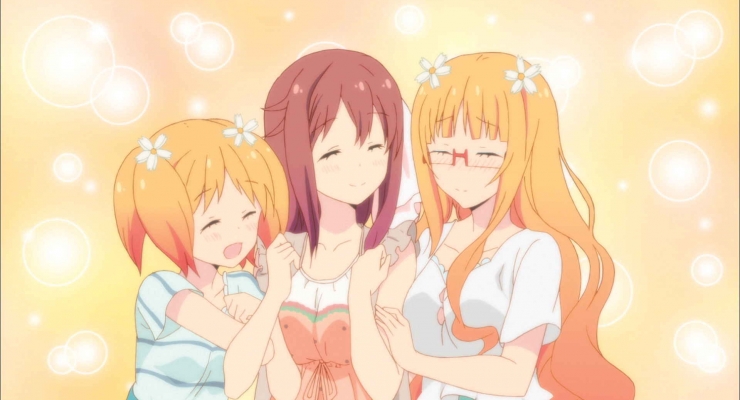 The digital animation for Sakura Trick comes to Blu-ray from Sentai Filmworks in a colorful, bright, and crisp AVC 1080p encodement that looks beautiful. It is free from most of the issues that tend to creep into these anime releases, like obvious color banding, video noise, and aliasing, and motion artifacts are also not an issue.

There’s a pleasant DTS-HD Master Audio 2.0 stereo mix of the Japanese voice cast included. The series is a slice of life comedy at its heart, so there aren’t many loud effects or wide changes in dynamics, but the music and sound effects are handled with good balance. The dialogue all sounds clean and the cast are pleasant enough given the cutesy moe material.

Sakura Trick is an average series that has a few good points, but ultimately looks and feels like it is the epitome of what many people complain about with anime – it rehashes the many plot devices and genres in an unoriginal way. The Blu-ray release looks great and the character designs are all good, but the series is forgettable.