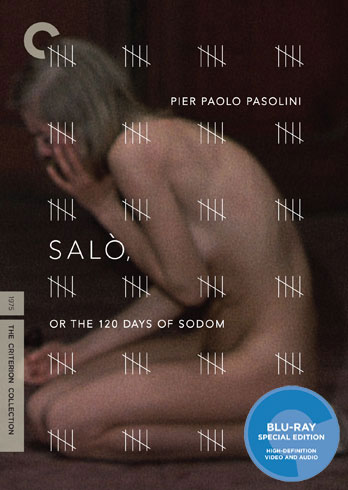 One of the most controversial films of all time, Italian filmmaker Pier Paolo Pasolini’s final work, Salò, or The 120 Days of Sodom was an updating of the Marquis de Sade’s novel, moving the story to fascist Italy at the end of World War II, and also incorporating the works of Dante. Discarding the literary pontifications of the two authors, Pasolini’s film cuts straight to the heart of human decadence as it follows four fascists who kidnap nine young boys and nine young girls, taking them to an isolated villa and subjecting them to tortuous sexual, mental, and physical punishments, even murder.

In 1976, Salò was accused of being no more than pornography and for some it may seem perilously close, but the film’s shock value would be overshadowed in the very same year by Nagisa Ôshima’s In the Realm of the Senses, who would take the barrier between pornography and mainstream film and tare it down completely, allowing his actors to not only expose themselves on camera, but to perform uncensored sex acts.

Salò comes in its original 1.85:1 aspect ratio with a 1080p/24 AVC/MPEG-4 encodement from Criterion Collection. For a film from 1976, the transfer looks rather remarkable. Source damage is not an issue at all, the grain structure is quite fine with lots of high frequency information. Color depth is a little light, and at times blacks look just a tad washed out, but shadow detail is very well extended.

The original Italian soundtrack in LPCM Mono is the way to go here. It sounds clean, full, and warm, with little to no crackle whatsoever. The English mix in Dolby 1.0 sounds quite sharp and high-ended in contrast.

This set comes with one of the better, fullest Criterion Collection booklets in addition to a good amount of featurettes on disc as well.

Twenty-five years later, the controversy and notoriety still circles around this film and Criterion have brought it to Blu-ray in an excellent package allowing anyone who wants to judge the film for themselves, with the film presented in the best possible light.

Salo is available on Blu-ray from the Criterion Collection