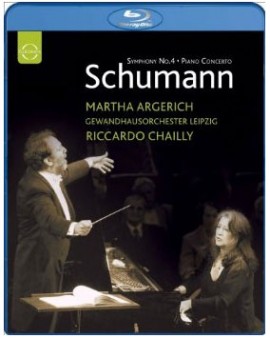 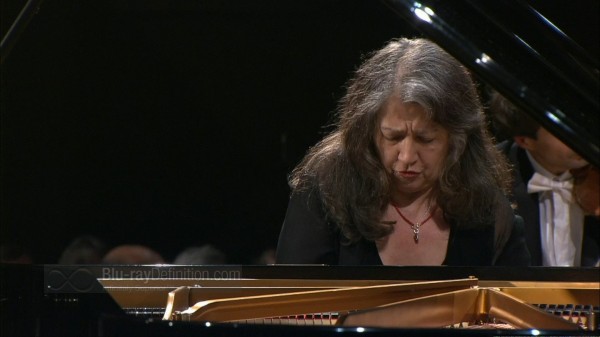 Looking over the 3,000 or so classical CD, SACDs, DVD-As, and now Blu-ray Audio and Blu-ray concert discs in my collection, I realize that there is a thin area when it comes to Robert Schumann. In fact, outside of a heavy dose of Berlioz and admittedly too many recordings of Saint Saens’ “Organ” Symphony, the Early Romantic period is very unrepresented in my collection.

I do, however, have a few recordings well of Schumann’s Piano Concerto, which appears on this release from EuroArts. Surprisingly enough, Schumann himself was not much at ease throughout his life composing in larger forms such as symphonies and concertos, but, rather, preferred to stay in smaller musical forms. His songs and small piano pieces are paragons of the Romantic period. They are compact flashes into the soul.

Schumann would use this concise, reflective, and melodious style to his advantage in his larger works. The Piano Concerto in A minor, Op. 54, which started its life as a fantasy for piano and orchestra written for his beloved and talented wife Clara to perform, shows Schumann’s skill at taking his small-form style into a larger scale. With tightly woven melodies that link each movement thematically, rather than isolate them in the traditional classical sense of a concerto, Schumann’s piece serves less as a simple vehicle for displaying the soloist’s virtuosity than a trip through a dizzying array of emotions. It is a manic battleground of moods that shifts from somber to stoic to longing and back again in the blink of an eye.

That is not to say that there is not ample opportunity for virtuosic displays, and Martha Argerich in front of the Gewandhausorchester, where the concerto was premiered, and under the very capable baton of Riccardo Chailly plays wonderfully throughout the performance. During the first movement’s cadenza, she dances across the keyboard with an ease and passion befitting such an emotionally charged composition.

Her encore is a piece that should be every crossover classical A&R programmer’s delight, Von fremden Ländern und Menschen (Of Foreign Lands and Peoples) from Kinderszenen, Op. 15. This brief piece evokes a feeling of nostalgia. With its lilting G Major melody that never quite resolves, perhaps it is meant as a memory of unrequited love. Argerich again does wonders with this bittersweet piece, squeezing more emotion out of its two minutes than some pianists can get out of an entire concerto.

This concert starts off with the Adagio and Allegro brillante from Études symphoniques, arranged by Tchaikovsky. Schumman wrote the Études symphoniques in 1834, inspired by the father of his secret fiancé at the time, Ernestine von Fricken. Schumann considered the collection of small piano pieces one of his most significant works for the piano. In 1863 and 64, Tchaikovsky transcribed two of the variations for orchestra and that is what is recorded on this release by Chailly and the Gewandhausorchetser Leipzig. It’s a brief energetic opening to the evening’s proceedings, but I’m not sure that I believe Tchaikovsky was quite as successful at extracting the essence of Schumann’s solo piano variations as Ravel was for his 4 Pieces from “Carnaval”, Op. 9, also recorded on this release. Orchestrated by Ravel in 1914 for the Russian dancer Vaslav Najinsky, the 4 Pieces demonstrate Ravel’s flare for orchestration while maintaining Schumann’s strong sense of melody. Chailly and the Gewandhausorchester put on a splendid performance of the pieces that injects a much-needed dose of liveliness to the evening. The “Marche des “Davidsbündler” contre les Philistins” is particularly invigorating.

Lastly, the evening ends with Schumann’s Symphony No. 4 in D minor Op. 120. Originally written as his second symphony, Schumann was unhappy with the results of the symphony and its critical reception. Seeming to garner a lackluster response coming after the praise of his “spring” symphony, Schumann withdrew the piece and would not publish it until many years later. So, though it carries the last number numerically, it actually predates his 2nd and 3rd symphonies.

The piece, restructured into one continuous movement without pause is considered one of the monumental pieces of the Romantic era, and would go on to influence many of the late-Romantic and early-Modern composers to follow. Despite the criticism that has dogged Schumann’s legacy about him not being a great orchestrator and being too closely tied down to his piano, the 4th is a delight of orchestral colors. It is a real thrill then to listen to this music being played by the Gewandhausorchester, so closely linked to Schumann throughout his life, under the superb direction of Riccardo Chailly. Although musically speaking, one can still hear the ever-looming presence of Beethoven in Schumann’s 4th, it is not difficult at all to look forward to Dvorak, Mahler, and Debussy in this music. Chailly brings the colors of the orchestration out cleverly, even if his tempi are at times a bit plodding. 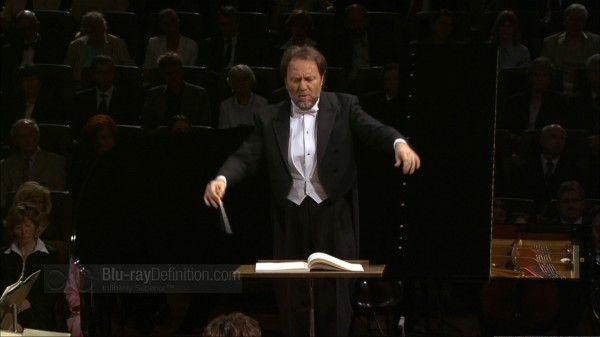 There’s not much to say about this typical, live high definition recording. Arriving in a 1080i/60 AVC/MPEG-4 encoding from EuroArts on Blu-ray, the orchestra with its men in black tuxedoes and women in black evening gowns is faithfully reproduced. Flesh tones are natural and there don’t seem to be any issues with motion artifacts. There is a little softness in darker areas where video noise peaks, but other than that, it’s a perfectly acceptable and lifelike presentation. 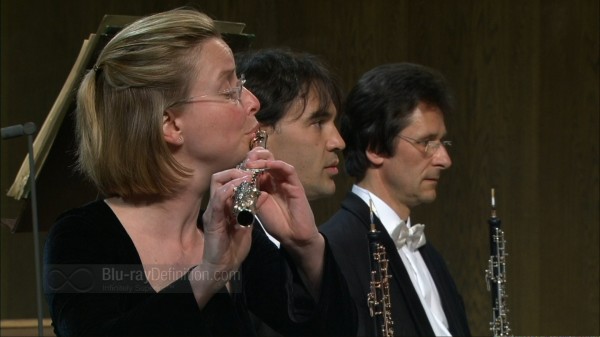 The audio quality on this release is a mixed bag. With PCM 5.1 and 2.0 mixes offered at a resolution of 48Khz/16-bit for both mixes, the sound never quite reaches a satisfying level of clarity with a three-dimensional depth of field. For the 5.1 mix, the mid-range sounds a little muddled and instrumentation lacks distinction. The string section sounds a little glassy and high-ended.

During the performance of the Piano Concerto, the piano, one of the most notoriously difficult instruments to record, sounds beautiful. It is full, the notes are clear, and the instrument’s dynamic range is put across well. The problem is, it is too forward and it absolutely dominates the mix, causing issues with balance in the rest of the orchestra to come to the fore.  During “Carnaval,” the percussion lacks a bit of punch.

It’s not all bad, however. The mix effectively captures a live sound with a superb balance of ambience in the surround channels and across the front three channels. There is also, thankfully, no overuse of the LFE.

The 2.0 mix has most of the same issues that affect the 5.1 mix, although it seems to be mastered at a lower volume. It certainly sounds a bit drier and lacks a little of the depth present in the surround mix.

There isn’t much to speak of in the supplemental department for this release. All that is provided are a few trailers for some other Blu-ray releases from EuroArts. 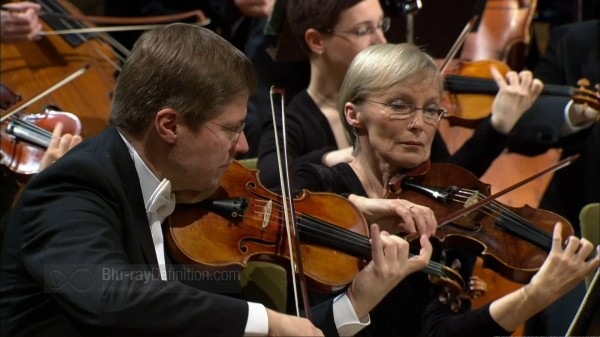 This Blu-ray offers an excellent program of Schumann’s large-scale works. It brings classical enthusiast who may not ever have the opportunity to make it to the famed Gewandhausorchester in Leipzig as close as possible to the real thing.  Recommended. 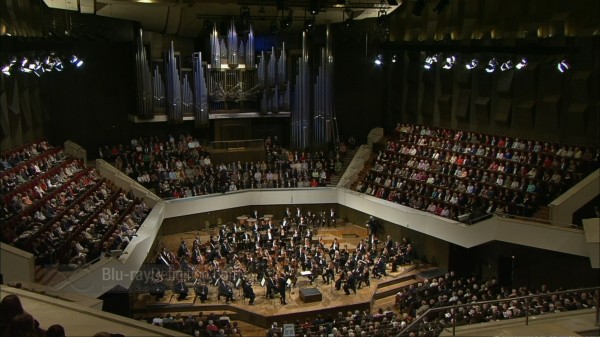 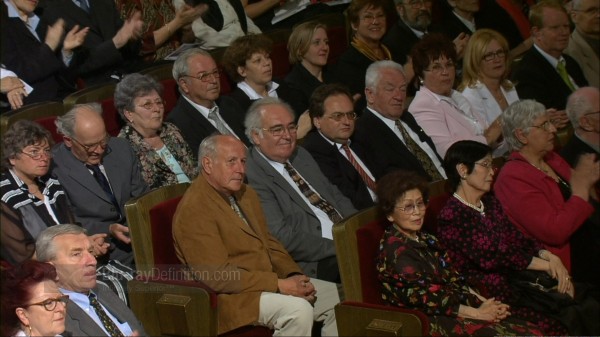 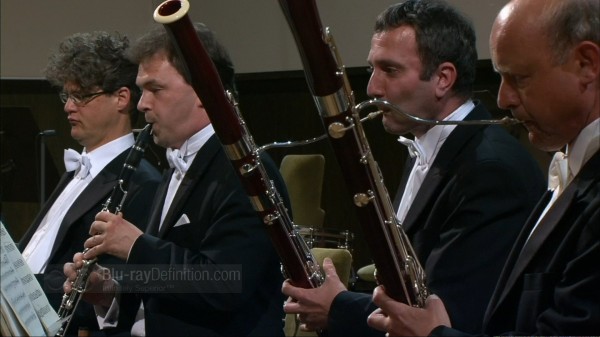 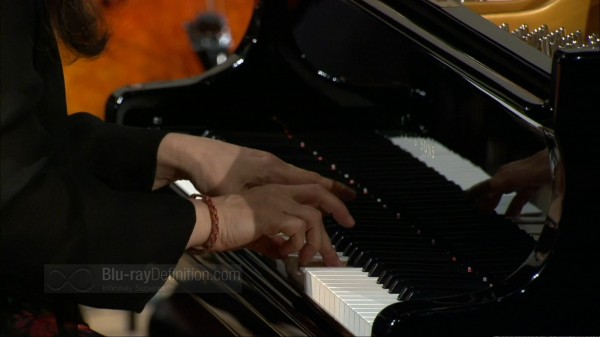 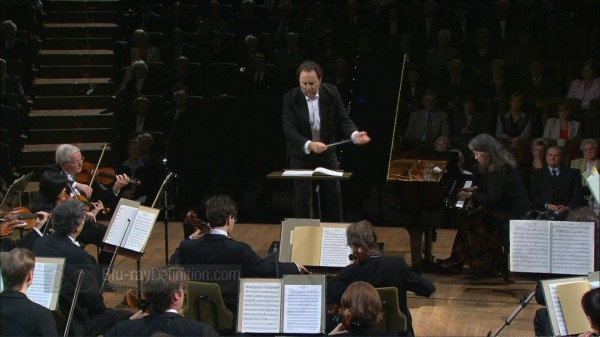 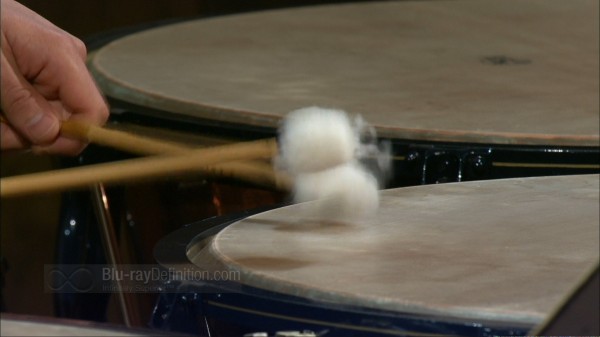 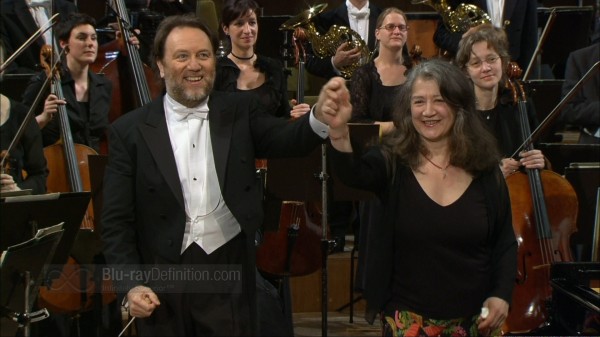