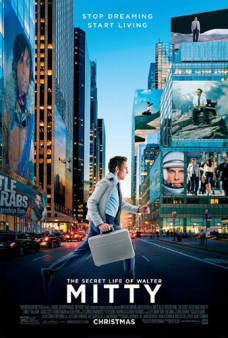 Ben Stiller directs, stars and co-produces The Secret Life of Walter Mitty, a remake of the 1947 film which starred Danny Kaye about a daydreaming magazine photo editor on a mission to finally meet his magazine’s top photographer, and at the same time trying to impress a divorced mom who also happens to work with him on the same magazine.

Set in New York City, Stiller plays Mitty, who works in the photo department at Life Magazine. He also daydreams quite a bit, in scenarios where he saves a dog from a burning building, where he beats up a member of the magazine’s management team, he even dreams that he can fly. He has also just joined the dating website eHarmony where he tries to send a wink to Cheryl Melhoff (Kristen Wigg), the woman he works with at the magazine. He is unable to send the wink so he calls eHarmony customer support and speaks to an eHarmony representative (the voice of The King of Queens‘ Patton Oswalt). This voice relationship is carried throughout the film, with the representative doing all he can to spruce up Mitty’s profile so that he can at least get a few winks from females on the site, which hopefully may lead to some dates. Meanwhile, at the magazine, the new management team announces that it will no longer be publishing, but that an online version will be the way forward (scary to think about), so most of the staff have been told that they will be fired, and this includes Walter and Cheryl. Meanwhile, the magazine’s star photographer Sean O’Connell, has sent to Walter the photo (still number 25) that is to be used for the cover of the last issue, however, Walter can’t find it. It is not in the envelope O’Connell sent with other photos. So Walter feels that it is up to him to track down O’Connell (and the missing photograph). Using the other photos as clues, and determined to get that photo and to finally meet Sean, Walter travels the globe to places he has only seen in photos, going from one beautiful location to another, and he sets off on an adventure of a lifetime. He goes to Greenland, where he jumps from a helicopter into a shark-infested ocean, to Iceland where he escapes from an exploding volcano, and to Afghanistan, where he climbs the snow-capped mountains. And as a added bonus, he can also include these adventures on his eHarmony profile, as he had not done anything exciting in his life prior to this. At the same time, all his sister talks about is her new acting role as Rizzo in a church production of Grease, and their mom (an underused Shirley Maclaine) is in the process of moving to a smaller flat. 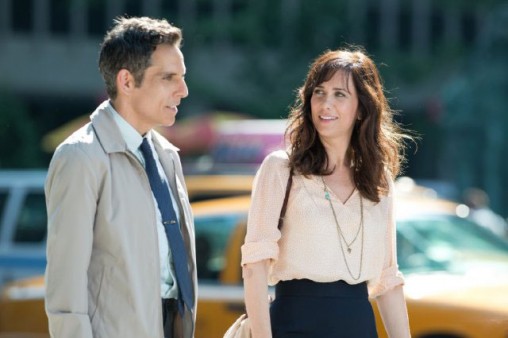 Stiller has done an amazing job in not only acting in The Secret Life of Walter Mitty, but also directing it. It is an excellent effort in that it shows Stiller’s range as a director, taking the movie from scenes in the middle of Manhattan to foreign countries, to rough oceans, and even the quirky romance between him and Cheryl. This movie is not your typical Ben Stiller film, who for the most part makes fare to middling comedic movies (such as the Night at the Museum film and it’s sequel, and The Fokkers films). Stiller, however, proved back in 2008 with Tropic Thunder that he is a moviemaker to be reckoned with, and with The Secret Life of Walter Mitty, he ups his game. The rest of the cast is fine, Wiig doesn’t have much to do, just smile and talk about her son, while Adam Scott plays the new manager who has to fire the whole staff, and, in Walter’s word, being a dick about it. Production values are very good, and the cinematography excellent, with amazing scenery that will take your breathe away. The Secret Life of Walter Mitty is highly recommended.