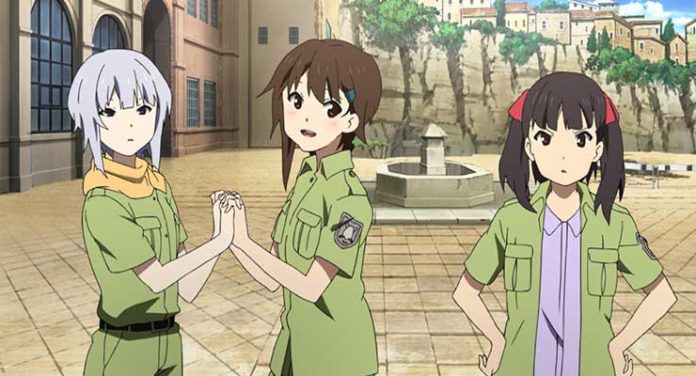 Sound of the Sky is an OVA series for television from A-1 Pictures and part of the Anime no Chikara OVA for TV project that also includes to date Night Raid 1931 and Occult Academy. This slice-of-life sci-fi drama is set in a post-apocalyptic future after a great world war has setback humanity’s technological progress. Female protagonist Sorami Kanata, inspired to learn to play the trumpet after hearing a mysterious soldier play the tune “Amazing Grace” joins the Helvetian (Swiss) army where she is stationed in a town called Seize in the 1122st Platoon. There, Kanata is assigned to play the bugle under the direct command of M/Sgt. Kazumiya Rio who in turn is under the command of 2nd Lt. Filicia Heideman. Kanata makes friends with the rest of the girls in the platoon, fellow private 14-year-old Suminoya Kureha, the platoon’s gunner, and 15-year-old pilot Kannagi Noeru. The platoon, known as the Flame Maidens, watch over the small town while supposedly being in a tenuous cease-fire with their enemies, the Romans. But peace may be short-lived as a growing tensions mount, peace talks begin to break down, and a princess long thought dead is needed to save the day.

Once one gets past some obvious flaws in Sound of the Sky like the Helvetian (Swiss) native language being French, but all of them speaking Japanese — for obvious reasons — or the enemy Romans’ native language being German (?), this series is actually a heartfelt coming of age story about a group of girls in an impossible situation. War has savaged the world leaving many of them and the younger children in their town as orphans; technology has almost entirely been wiped away. The sole vestiges of humanity’s bygone accomplishments are an advanced tank that Noeru has been rebuilding. It contains many technologies like LCD panels, guidance and targeting systems and voice commands that do not exist anywhere else anymore apparently. The targeting system relies on a glass lens so advance that the local glass blower has gone through untold amounts of lenses trying to duplicate it without success.

The interaction between the characters in the series is what really drives it forward. Although this is post-apocalyptic, it doesn’t have any sot of Mad Max vibe going on. It is more like a post World War I era with a twist and the daily lives of the girls in the platoon becomes the focus. The relationship between Kanata and her mentor Rio, her growing friendship with Kureha, and Noeru laid back ease at getting along with everyone forms the basis of what makes each episode click.

The artwork, character designs and backgrounds are variably detailed, colorful, and evocative. They come across not like bold statements as some more action-focused series do, but more quaint, like sketchbooks at times or watercolors at others. 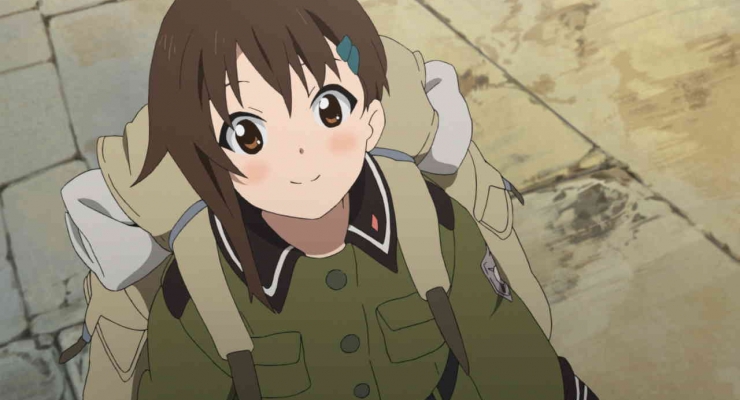 The AVC 1080p encodement framed at 1.78:1 is colorful and crisp without being oversaturated, lacks any major issues with color banding or aliasing, and is generally pleasing all around.

The original Japanese-language mix is provided in LPCM 2.0 stereo along with standard English subtitles or English with honorifics subtitles. The sound is superbly done good dynamics, clear dialogue, and excellent musicality for the quaint score, which plays a major part in the story. The voice actors also do a wonderful job all around.

It doesn’t seem like much at first glance, but this is actually a windfall of extra content. We get an alternate version of the first episode plus two bonus episodes, episode 7.5 and episode 13 and thankfully 7.5 and 13 are both placed in chronological order on the disc. The artwork and still galleries are an added bonus.

A solid, heartfelt series that is more slice-of-life than strong sci-fi or war, Sound of the Sky does eventually build to a narrative that leads to an intense conclusion that can feel a little shoehorned in and hurried, but overall this is a solid little series with likable characters.