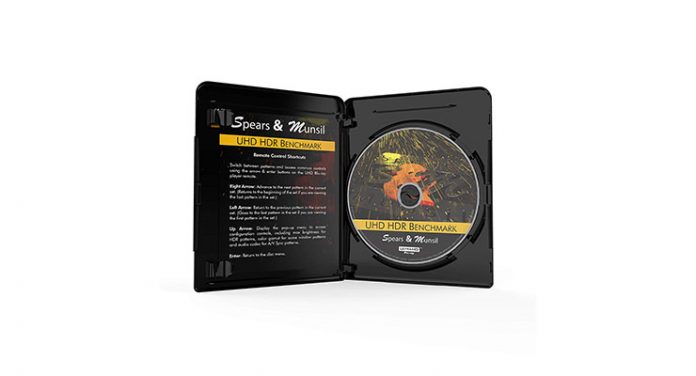 When I took the 4K UHD dive in 2017, I anticipated that Spears & Munsil would make a calibration/test disc like the one they had crafted for 2K HD displays.  While a number of 4K UHD display manufacturers had made “demo” 4K discs, these were usually hard to come by and lacked the full range of features to optimize the UHD images with a wider color gamut.  Spears & Munsil announced the release of their new UHD/HDR disc this month and when it arrived in my mailbox, I tore open the plastic wrap and quickly slid it into my Oppo UDP-205 universal player.

Consider the Spears & Munsil UHD HDR Benchmark as a Swiss Army knife for home theater installers equipped with essential tools like spectroradiometers and colorimeters to get the best performance out of 4K UHD/HDR displays with the supplied test patterns. Co-creator Stacey Spears writes: “These patterns are tested by real industry professionals, multiple times over multiple iterations, before we put them on the disc. These are the same patterns used regularly by the same people who produce your displays, players, and movie content.” Spears adds that“we believe this disc completely changes the game for test and evaluation discs, by making use of all of the features and range that HDR and wide-gamut standards can offer.” Almost every pattern is encoded in multiple versions, with metadata and peak levels adjusted for a wide variety of HDR display technologies.

Spears’ long-time colleague Don Munsil notes that this new disc uses patterns created from scratch using Spears & Munsil’s own in-house software as well as new editions of some favorite patterns from the earlier editions. “We build every pattern using our own tools, written from scratch in C++. If a pattern needs to be generated directly in a very specific color space and data format, we generate it in that color space and format…In a few cases we’ve had to create our own format, because no existing file format could represent the pattern we needed to create.”

The disc has test patterns and calibration options for displays capable of handling HDR10, Dolby Vision as well as the newer HDR10+. There are seven well-organized menus that are accessed by the disc player’s remote-control buttons—up/down, forward/back, and enter:

The Configuration menu allows for adjustment of brightness from 600 cd/m2 (candelas per square meter) to 10,000 cd/m2with the default being 1000 cd/m2. Since my room is kept fairly dark, I stayed with the default setting. HDR Gamut offers either P3D65.BT.2020 (default) or BT.2020 (I stayed with the latter). There is also a choice of Audio Codecs, Dolby TrueHD (my prefernce) or DTS-HD MA, both in 5.1 surround sound. While the back of the disc case specified a bit depth of 10 bits, my player seemed to see the content bit depth as having 12 bits.

Video Setup allows for the adjustments to Contrast, Brightness, Color and Tint, Sharpness, Color Temperature, Framing, Bias Light, and Color Space Evaluation.  A/V Sync does exactly what you would expect—it synchronizes the audio and the video content. Advanced Video, Video Processing, and Windows are tools intended for professionals to do the final tweaking of the 4K display. Advanced Video enables chroma alignment, color space evaluation, high/low dynamic range high/low, image cropping,  black/white dots, HDR color bars, and full field white at 100 cd/m2 or 201 cd/m2.  Video Processing offers quantization, scaling UHD or HD, luminance loading, and HSV sweeps at either BT.2020 or P3D65/BT.2020 among its many options. Windows provides a test grayscale, peak vs size adjustments, a color checker, saturation sweeps, and a color gamut. The SDR BT.709 menu has an array of adjustments similar to that of Video Setup but for the standard dynamic range content of 1080i/1080p Blu-ray discs.

There is a series of stunning nature scenes and arresting urban skylines, mastered from 8K sources, that can be viewed in Dolby Vision, HDR10, HDR10+, and SDR. A number of these vignettes will be familiar to viewers who already own Spears & Musil Blu-ray test discs.

Unlike the earlier Spears & Munsil video test and calibration discs, my major caveat about Spears & Munsil UHD HDR Benchmark is that it is primarily intended for professional installers since the documentation is sparse to nonexistent. Its creators assume that a prospective user will have the appropriate test equipment and will understand the purposes of the various test patterns and calibration tools that are included.* This is the most sophisticated video test disc that I have seen and a must-have tool for those who want to get the very most out of their displays. If you have sunk major bucks into your oversized 4K UHD display, this is a reasonably priced way to get it optimized, preferably by a trained professional.

* Update (July 25, 2019): Since the publication of this article Spears & Munsil have published a set of guides available online for the test patterns that appear on this disc. They can be fopund at the following URL: https://spearsandmunsil.com/3rd-edition-articles/