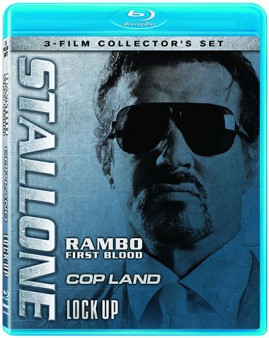 Rambo: First Blood tells the story of Vietnam veteran John Rambo (Sylvester Stallone; The Expendables). Searching through the mountains of Washington for a long-lost comrade, John soon discovers that his best friend was the victim of cancer, caused by “agent orange”, a chemical herbicide used during The Vietnam War. In hopes of learning why exactly this occurred, John returns home to Hope, Washington. Upon arrival, he’s banned from the town by the local Sheriff (Brian Dennehy), who will soon find himself in an all out war with John after learning who he really is. What results is an all-around excellent film, one that has since continued its story through three other films.

Cop Land tells the story of Freddy Helfin (Stallone), a man trying to figure out exactly what life wants from him. Everything seemed to be okay for Freddy, until a heroic rescue left him deaf in one ear. Now he drinks too much, steals change from parking meters, all while attempting to continue his day job of chasing criminals out of alleyways. One day, while at a bachelor party, Lt. Ray Donlan (Harvey Keitel) and his nephew Murray Babitch (Michael Rapaport) find themselves in a heap of trouble after Babitch mistakenly guns down two African American teens who he thought were threatening him. Wanting to protect the nephew of the Lt, a few other officers come up with a few different scenarios in hopes of saving Babitch.

Lock Up tells the story of Frank Leone (Stallone), a man who has a meer six months left on his prison term. Upon completion of his sentence, Frank is hoping to begin his life with his girlfriend Melissa (Darlanne Fluegel), as well as finally open his own auto mechanic place. However, one night Frank is quickly taken away to a facility known as Getaway, ran by the vicious Warden Drumgoole (Donald Sutherland; TV’s Treasure Island; TV’s Moby Dick; Horrible Bosses; Cold Mountain; Revolution; Don’t Look Now). With an issue stemming from their past, Frank’s hope at a future outside of prison walls just may not occur.

With a low MSRP of $19.99, three strong (if somewhat flawed at times) films, how could you NOT want to own this?

Each film has its own specs, so I’ll break down my thoughts on the video quality for each.

Rambo: First Blood shares the same video transfer found on the original 2007 release, the same 2:35:1 aspect ratio, AVC MPEG-4 encoded look. Capturing the dark, moody, gritty feel, this transfer delivers solid results. The color palette, as mentioned, features rather drab, muted colors all meant to capture the mind and feelings of a man coming out of a post Vietnam War. Comparing this to the previous DVD release in my collection, this one improves on that just fine. All in all, this a fine effort for a film 30 years old.

Cop Land shares the same video transfer found on the recent 2011 release, the same 1:85:1 aspect ratio, AVC MPEG-4 encoded look. The result here is that it is a mostly solid transfer, however, it does have a few issues that keep it from being great. The main problem here lies in the darker sequences. Brighter moments hold a fine amount of detail, particularly that of facial close-ups where flesh tones are accurate and white levels seem strong. Once we move to the lower lit scenes, detail is lost, the image becomes murky, and grain overwhelms the image to the point where it becomes hard to make out anything. This may have been a stylistic decision by the DP, but regardless of that I still found this to be a somewhat solid effort.

Lock Up features the same video transfer found on the 2010 release, the same 1:85:1 aspect ratio, AVC MPEG-4 encoded look. For a film roughly 23 years old, I was quite impressed with the overall video quality here. Detail is solid throughout, whether it be the facial close-ups of Stallone’s character, or the fine textures on the white tanktop he wears. Grain levels are, surprisingly kept to a bare minimum making me wonder if any scrubbing tools were applied here. Outside of this possibility, this is a transfer that fans will definitely appreciate. Nothing home-run worthy, but still impressive considering the age of the movie.

Each film has its own DTS-HD Master Audio 5.1 track. Like the video section, I’ll break down each film’s audio.

Rambo: First Blood arrives with either a DTS-HD Master Audio 5.1 or DTS 5.1 (1.5mbps) track. For the purpose of this review, I selected the lossless variety. With this being a heavy action film, one should expect this track to sound great. Oh, and boy does it ever. The numerous action sequences help to give us a sense of atmosphere, placing us right in the middle of the Frey. Dialogue can be a bit on the low side, so you may find yourself adjusting the volume here and there. Besides that, I had no real qualms with this effort from Lionsgate.

Cop Land arrives with a DTS-HD Master Audio 5.1 track, which is nearly perfect in all aspects. Dialogue is well reproduced via the center channel. Atmosphere is quite possibly the best aspect of this mix, constantly involving the viewer in the action occurring on screen. Whether quieter dialogue moments, or the high octane action, every little portion of this track has been given the utmost attention to detail. Gun shots zip by our ears, surrounds help to bring the New York locale home, and LFE offers up deep, immersive bass. Outside of an issue I had with the final closing moment (one which I won’t mention here as it reveals the film’s ending), this is a fine effort from Lionsgate.

Lock Up arrives with a DTS-HD Master Audio 5.1 or 2.0 track, both which sounded okay, but definitely are prime examples of how limited sound design use to be. Dialogue lacks clarity at times, making us search for the remote more often than we’d like. Surrounds are quite restrained, rarely giving us much response outside of a slight punch. LFE is also laid back, only slightly showing signs of life during a few of the fight sequences. In reality, this track does what it can given its limitations.

The included supplements have been ported over from their previous individual release.

Regardless of whether or not audiences enjoy Stallone as an actor, one can’t deny the man has made damn entertaining films. Three of them, in Rambo: First Blood, Cop Land, and Lock Up are featured in this package from Lionsgate, arriving with a MSRP that no action fan should ignore. Recommended.