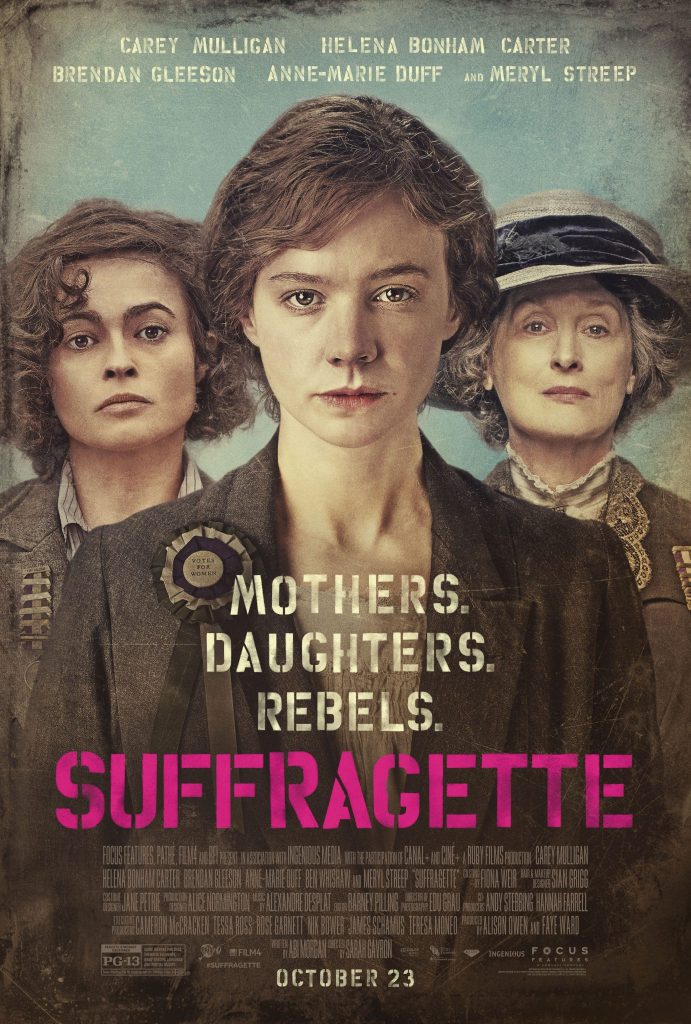 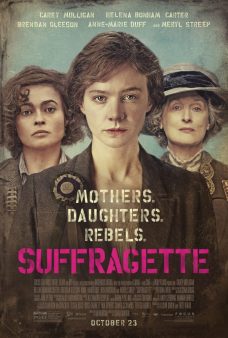 Suffragette is told through the eyes Maud Watts (Carey Mulligan) in London, 1912. She works in a local factory, the Glass House Laundry in Bethnal Green, is married to fellow factory worker Sonny Watts (Ben Whishaw) and they have a young son. Watts has actually been a part of the factory since she was very young: her mother worked in the same factory and would strap her to her back when she went to work. Her mother died when she was four and Maud started working part-time there at the age of 7. At the age of 12, she started working full-time. She’s now a lead washer where she makes 13 schillings a week (compared to the salary a man is paid for the same job – 19 schillings a week). Watts has also been sexually molested by the hard core boss Norman Taylor (Geoff Bell). One day Watts is asked to accompany another women who’s to speak at Parliament about women’s working conditions and a bill to give women the right to vote. Watts wasn’t supposed to speak, but the other woman, Mrs. Violet Miller (Anne-Marie Duff) had been beaten up and didn’t look presentable, so Watts is thrust into giving the pre-prepared speech. Watts speaks from her heart, and from her experience, ignoring the script that was written. This lights something within Watts and turns her into an activist. She gets more more disgusted at the lack of women’s rights, and even more so when she sees young factory worker Maggie Miller (Grace Stotter), Violet’s daughter, being groped by Taylor in his office. Taylor is a sexual predator who believe women have no rights, and he tells Watts to ‘leave the vote to us.’ 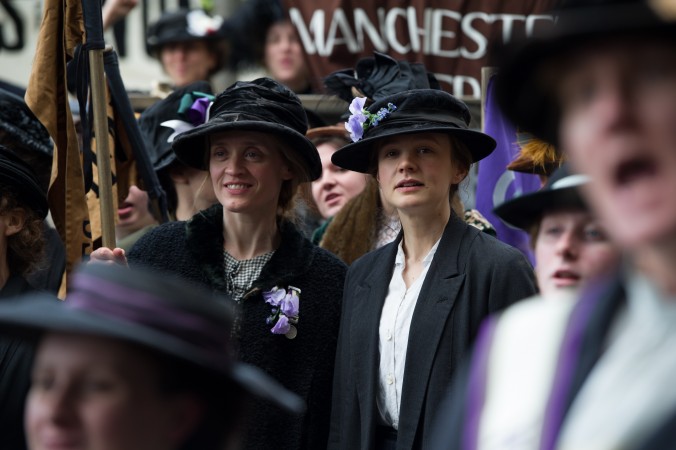 But Watts’ pleas to Parliament are not enough. They say that there is not enough evidence to support the bill. The women rebel in front of the Houses of Parliament; many are thrown to the ground by the police with little regard for the women’s safety. Some, including Watts, and fellow protester Edith Ellyn (Helena Bonham Carter), are sent to jail, where they are humiliatingly stripped naked. But this doesn’t deter them, and this leads to Watts becoming a member of the ever increasing suffragettes – a group of women working full-time to advance the rights of women. The Suffragettes are led by Emmeline Pankhurst (Meryl Streep) — a woman who has given up her life to further the cause. She’s also in hiding for fear of getting arrested for leading the movement (during those times women had very little rights). Determined police inspector Arthur Steed (Brendan Gleeson) puts the women under surveillance — he won’t let them carry on with their protesting and letter box bombings – he wants them all arrested, especially Pankhurst, and calls the women the “East London ladies.” But Pankhurst rallies the women — she tells them at a gathering in a speech from a balcony “We would rather be lawmakers, not lawbreakers.” The women continue their protesting, even resorting to bombing an M.P.’s house, just to get their message across. But Watts eventually loses more than what she bargained for, but she’s more determined than ever to fight for the cause.

Suffragette tracks the foot soldiers of the early UK feminist movement, working class women who were forced to go into hiding to pursue equality. They were willing to risk, in their fight, their jobs, homes, families, and for some of them, their lives. And it’s a great movie. The film lies heavily on the shoulders of Mulligan’s portrayal of her character, a fictional character but someone who we route for every step of the way. It’s an unflawed performance that hopefully will see Mulligan receive an Academy Award nomination. Streep, who shares top billing, is only in the film for less than five minutes, but her character’s presence is felt all throughout the movie. Carter is perfectly cast as the local pharmacist and fellow activist, with a husband who supports her every step of the way. Carter is actually the great-granddaughter of Herbert Asquith, the Prime Minister during the time this movie takes place. Director Sarah Gavron (Brick Lane), working from a script by Abi Morgan (The Iron Lady), successfully and beautifully blends in actual footage of the real protestors into the film, in a film that effectively uses dark lighting and non-glamorous costumes to set the mood of the times. And while the plot may be familiar (the recent Made in Dagenham follows a similar plotline), Suffragette is an important film to highlight what women did to get equal rights. And we have to be reminded that they are still fighting, and in some countries around the world (Saudi Arabia), women still have very little or no rights.