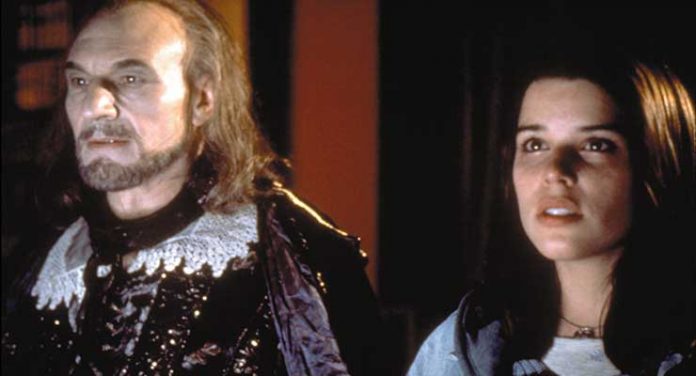 Based on Oscar Wilde’s classic tale, The Canterville Ghost is a 1996 made-for-TV movie that stars Patrick Stewart (Logan, Star Trek: The Next Generation) in the titular role alongside Neve Campbell as American teenager Ginny Otis who is dragged by her family against her will from the United States to the stately old English manner Canterville Hall to spend the summer.

Ginny is understandably upset, at odds with her parents, and bored out of her mind, but she soon realizes there is more to Canterville Hall than she expected when a malevolent specter (Stewart) begins haunting her and her two younger brothers. Her father being a scientist unwilling to accept that a ghost may actually exist, accuses Ginny of trying Ginny of trying to sabotage the family’s time in England. Soon, Ginny finds out the tragedy behind the ghost and the curse keeping him stuck haunting the halls of the manner forever and she determines to help him break the curse and set him free.

The Canterville Ghost is part Hammer horror and part family fantasy, but mostly the latter. Although this TV movie has a fine visual sense for a low-budget production, there isn’t much substance beyond that and some poor visual effects hinder it at times. The teleplay from Robert Benedetti seems to be pandering to younger audiences, so any wit that may have resided in the Oscar Wilde source is scrubbed clean. The finest moments come from Patrick Stewart’s Shakespearean monologues when he both laments the arrival of the Americans he wants gone and – in what is perhaps the most clever scene of the entire 92 minutes – when Stewart’s ghost talks himself into trying to win a second ghost to his side, which, unbeknownst to him, is a trick being played on him by the young Otis boys.

While there are some clever and heartfelt moments in this version of The Canterville Ghost, it only rises to the level of a quaint movie that is safe enough to put on for the kiddies at the Halloween festivities. 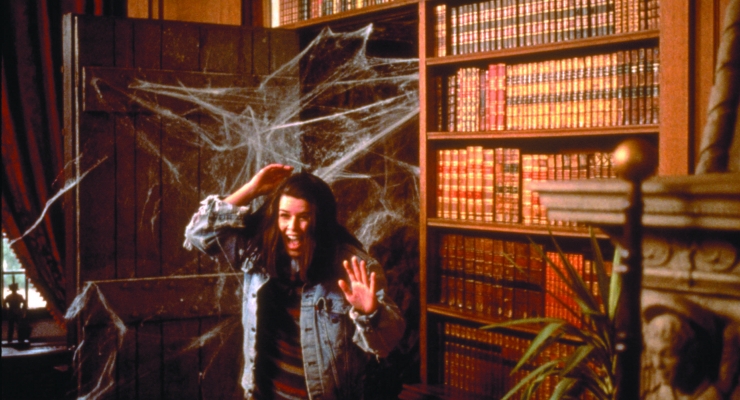 This 20-year-old production still shows its age. While there isn’t much source damage to speak of, there is enough film softness and washout in the shadows to be distracting. That said, this AVC 1080p encodement on Blu-ray does have good color reproduction, especially the flesh tones, and the outdoor scenes in daylight are pleasing enough.

The Canterville Ghost comes with a simple LPCM 2.0 stereo mix on this Blu-ray from Second Sight. Given this is a TV movie from 1996, one wouldn’t expect much more and the audio suffices with clear dialogue and sufficient dynamic range, but it won’t be coming out as reference material any time soon.

These two new interviews with the writer and director offer a lot of insight into the production and the relationships between the actors and these men. They are actually very interesting to watch and recommended.

This “horror” film from Oscar Wilde’s story arrives just in time for the holiday. While it may not count as scary enough for ardent horror fans looking to get their scare on during Halloween, for younger kids and families, this should fit the bill nicely once you get tired of The Nightmare Before Christmas.

2.8 / 5 TheaterByte Rating
{{ reviewsOverall }} / 5 User Rating (0 votes)
UK: URating Certificate
Anasazi | Signboard Hill Productions | Second Sight FilmsStudios & Distributors
Syd MacartneyDirector
Oscar Wilde (short story) | Robert Benedetti (teleplay)Writer
92 Mins.Run Time
£19.99MSRP
30 Oct. 2017Release Date
1.78:1Aspect Ratio
AVC 1080pVideo
English LPCM 2.0 StereoAudio
English SDHSubtitles
The Creative Content
The Video
The Audio
The Supplements
Summary
A malevolent ghost (Patrick Stewart) cursed to haunt the halls of a stately English manner for all eternity must be helped by an American teenager (Neve Campbell) spending the summer there against her will with her family in this at times cheesy throwback to Hammer horror, but always family-friendly made-for-TV movie based on the story by Oscar Wilde. This Second Sight Films Blu-ray release has only an average looking HD transfer, but it is pleasing enough given the source.
What people say... Login to rate
Order by: