The Conjuring: The Devil Made Me Do It (4K Ultra HD Blu-ray Review) 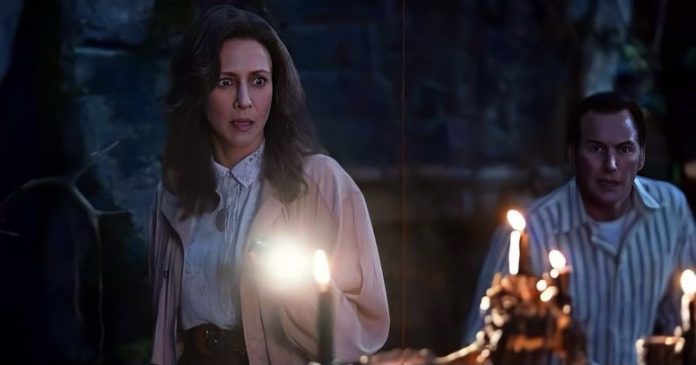 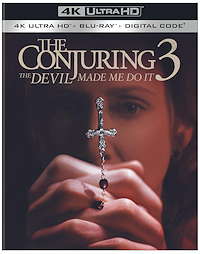 The Conjuring: The Devil Made Me Do It is the third installment of this horror franchise following the exploits of paranormal experts Ed and Lorraine Warren (Patrick Wilson and Vera Farmiga).

The film gets off to a rollicking if derivative start as we see the Warrens having to take part in an exorcism of 11-year-old David Glatzel (Julian Hilliard) who has been experiencing paranormal instances as soon as his family moved into a new house in Brookfield, Connecticut. The exorcism of David goes awry, the malevolent entity goes wild and leaps from David to his David’s older sister’s boyfriend, Arne Cheyenne Johnson (Ruairi O’Connor), who asked it to possess him and leave David alone. Sometime later, disturbed by what seem like demonic visions, goes on to murder his landlord. The Warrens are brought in once again to help Arne with his legal defense and prove his innocence on the grounds of demonic possession. Their investigations lead them to the discovery of what they believe to be a powerful occultist.  The Warrens find themselves fighting to survive their dangerous investigation as they fight to keep Arne off death row and prove he was in fact possessed.

Directed by Michael Chaves (The Curse of la Llorena), The Conjuring: The Devil Made Me Do It is solidly directed as a horror film. It provides plenty of scares, lots of shadowy atmosphere and detailed sets like the Glatzel home or the demonic library of retired priest Kastner (John Noble).

The film has a lot to enjoy, and it almost succeeds, but after the midway point it begins to lose its way and lose steam as it tries to weave together its haunted house legacy, the new detective story angle, and the multiple layers of character in the Arne as possible psychopath or possible empathetic character possessed by a demon. The story goes sideways and loses our attention even while the production value remains high.

The Conjuring: The Devil Made Me Do It was shot on Alexa SXT and Alexa Mini cameras at 2.8K. It arrives on 4K Ultra HD Blu-ray in HEVC 2160p with HDR10 framed at 2.39:1. The MaxLL is 514 nits with a MaxFALL of only 91 nits, so the overall brightness is not very much greater than the standard Blu-ray, which is included in this set, but there are differences that can be scene. Specular highlights standout. The scene where Lorraine Warren sees the vision of the two young women in the forest at night with the flashlights shows more ‘pop’ in the lights and contrast between the inky black shadows and the areas lit by the flashlights. Also, the lamplights in the Glatzel household show a little more of an amber glow a tiny bit more brightness than on the Blu-ray where they have more of just a pale yellowish, flat glow. The 4K disc also resolves the resolution better with less apparent digital noise, not that the Blu-ray is noisy, but the 4K just looks a tad cleaner in its ‘filmic’ presentation.

The Conjuring: The Devil Made Me Do It comes to 4K Ultra HD Blu-ray with an awesome Dolby Atmos mix that has lots of height awareness and deep, resounding low frequencies. It doesn’t take long to notice any of this because when the film starts and the opening exorcism where we can hear sounds from above, behind and the sides while dialogue does stay relatively clear, although this scene purposely buries the dialogue just a bit. Overall dynamics are good with whisper quiet, atmospheric sounds to the loudest bumps.

The best bonus included here is the motion comic from DC. The rest are the usual but interesting ‘making of’ type featurettes on the different elements of the film.

This is a solid 4K Ultra HD release from Warner of an entry in this franchise that is the weakest so far but still watchable. The disc will definitely give your home theater system a workout.

Load more
The Conjuring: The Devil Made Me Do It (4K Ultra HD Blu-ray Review)Paranormal experts Ed and Lorraine Warren (Patrick Wilson and Vera Farmiga) investigate a murder that may be linked to a demonic possession with the fate of the killer on the line in this weakest but still watchable third entry in 'The Conjuring' franchise.