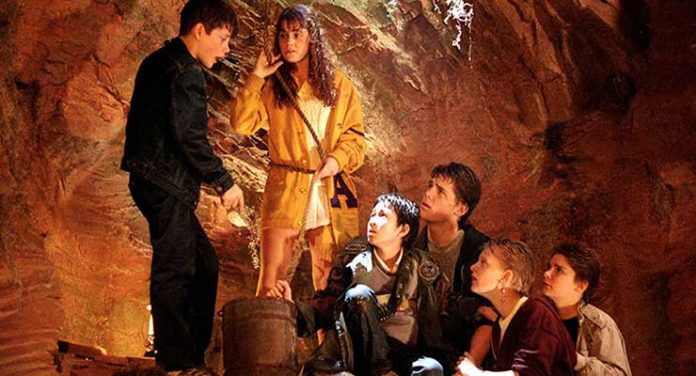 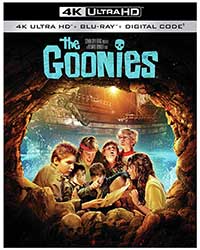 I have to admit right up front that I have never seen The Goonies before watching this 4K Ultra HD Blu-ray release, so I wasn’t exactly sure what to expect. Right away the film reminded me of the old Our Gang film in which Spanky and the gang go on a treasure hunt in a nearby cave, come up against a giant, and discover a horde of gold and jewels. So, put Spielberg’s film (he’s credited as creating the story, Chris Columbus with writing the screenplay) down as yet another one of those uncredited Hollywood films very blatantly taken from someone else, and there are plenty of examples, such as 2007’s Disturbia (an obvious uncredited remake of the 1954 Hitchcock classic Rear Window) or 2001’s The Others (an obvious uncredited remake of the 1961 haunted house thriller The Innocents).

Despite all of that, The Goonies is a fun and feisty family film that brings together some of the young Hollywood stars of the time, most of whom would go on to become fixtures in the entertainment business, including a young Josh Brolin and Sean Astin and Martha Plimpton, plus Corey Feldman, Jeff Cohen, and Ke Huy Quan. They all play a group of misfits who go on a search for the mythical buried treasure of a pirate named One-Eyed Willy in a series of underground caverns. They run up against the nefarious criminal Mama Fratelli (Anne Ramsey) and her brood of outlaw sons. Fortunately for the kids, they also run into Mama’s deformed yet kind son (John Matuszak), who takes their side and helps them escape her.

The direction from Richard Donner (Lethal Weapon, Superman) is light-handed, filled with kinetic energy, and hits the right comedic notes from the Chris Columbus screenplay. The only part of the film that feels a little bogged down is the opening act that just sets up the characters (and, frankly, also panders to some lame stereotypes), but then it’s off to the races for a cool family-friendly adventure where the kids always seem to get the best of the grownups. Visual effects are one of the standouts of the film that really let you know this is a Spielberg production as well, and remember, this is 1985, so this is all practical effects, not CGI. Some of them may not age quite as well, but that just contributes to the film’s charm. 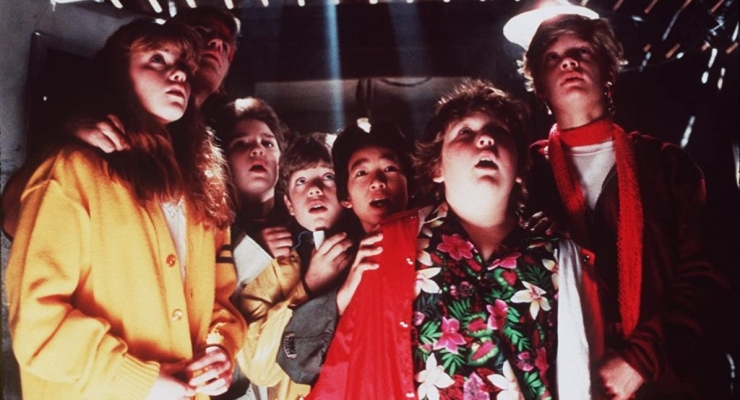 The Goonies hails from 1985 and was shot with anamorphic Panavision lenses on Panavision cameras using 35mm film stock. This 2020 4K remaster from Warner utilized a 4K digital intermediate and arrives on 4K Ultra HD Blu-ray in a 2.39:1 HEVC 2160p (4K) encodement with HDR10 HDR. It’s a great looking transfer. The opening title sequence looks a bit rough, but once we get past that this is clean looking, well detailed, and lovely looking picture with natural flesh tones, extended shadow details, and the HDR10 really ‘pops’ in the highlights and brings out the colors in the cave sequences in particular.

The Goonies comes to 4K Ultra HD Blu-ray with an excellent lossless DTS-HD Master Audio 5.1 mix (the included Blu-ray has a lossless Dolby TrueHD 5.1 and lossy Dolby Digital 5.1 mix). It may not be an ‘immersive’ mix in the sense that it’s not DTS:X or Atmos, but it sure does succeed in being quite engulfing and immersive nonetheless with superb balance, excellent use of surrounds, good extension into the low end, and clear, full dialogue.

All the bonus features are on the included Blu-ray, which is itself just a repackage of the previous 2011 Blu-ray release, so nothing included here is new other than the digital code.

Thirty-five years later, and The Goonies still seems fun to watch – even for someone who has never seen the film before and lived through the era. This 4K release misses some opportunities to include new bonus features, but other than that it’s a marvelous remaster with a gorgeous picture and excellent sound.

The Goonies is out on 4K Ultra HD Combo Pack September 1, 2020 from Warner Home Entertainment 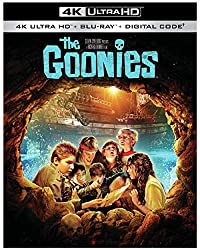