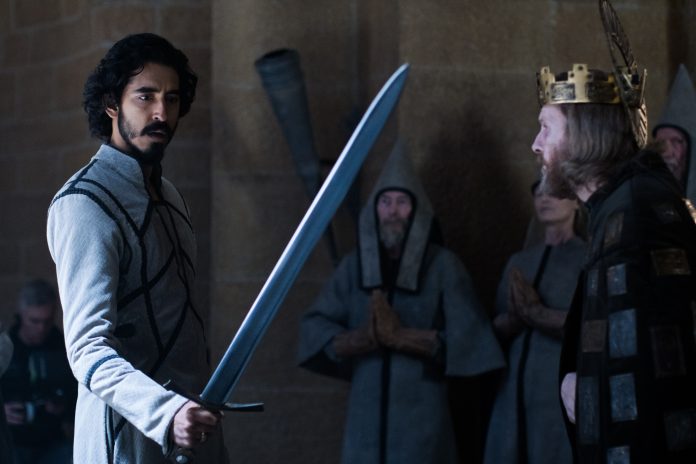 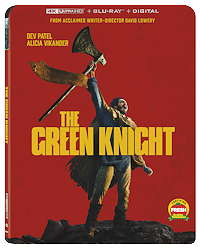 The Green Knight is a fantasy retelling of one of the more famous stories from the Arthurian legends. Writer-director David Lowery gives us the story of a young often reckless Sir Gawain (Dev Patel) who is trying to earn a place as a knight in his uncle King Arthur’s (Sean Harris) court. During a gathering at the court on Christmas Day the King invites Gawain to come and sit by his side, which he hesitantly accepts. During this same gathering, the Green Knight (Ralph Ineson) who has been menacing the kingdom for a while interrupts the meeting, galloping into the court on his horse. He throws down a challenge to Arthur’s knights to fight him and strike a blow against him. None are willing to take the challenge, none but Gawain wo takes the bait. But there is a rub, if he can strike a blow, he must meet the Green Knight in one year and allow him to strike a blow against him wherever he chooses. The Green Knight willingly offers his head and Gawain strikes, but unfortunately for Gawain, the Green Knight picks up his head and reminds Gawain he must now meet him in one year.

Gawain spends most of the following year wallowing in self-pity before taking off on his journey to find the Green Knight at his Green Chapel. The journey will take him through strange lands and have him confronting more tests about his own morals and chivalry as a knight than the actual confrontation with the Green Knight will.

Lowery’s film, though it can seem meandering at times, is a different sort of fantasy and Arthurian adaptation. This film avoids the cliché of medieval blood and guts and opts for a more surreal, thoughtful approach, filled with symbolism, confrontations on existence and the meaning of life. There are some experimentations with non-linear storytelling, particularly in the final act where the intensity really picks up and leaves you thinking about butterfly flapping its wings sort of philosophy.

The Green Knight was shot on the Arri Alexa 65 with Arri Prime DNA lenses in the ARRIRAW (6.5K) format and uses a 4K DI. It comes to 4K Ultra HD in the OAR 1.85:1 in a HEVC 2160p (4K UHD) encodement with Dolby Vision (HDR10 compatible). This film spends a lot of time in the shadows, so if your black levels aren’t set properly or if your display can’t handle blacks properly, this won’t look good. Think about “The Long Night” from season 8 of Game of Thrones. If you couldn’t see anything in that episode, even on the 4K disc with Dolby Vision, you’ll have a hard time with this film. On my CX OLED, the shadow detail looked fantastic, and the application of Dolby Vision was equally stunning. Torch flames ‘popped’ with bright reds and oranges against dark backgrounds. The grout outlines of stones in the castle walls could be easily made out in the shadows, and cool white light from overhead beams down with blinding specular highlights. The detail in flesh and cloth is impeccable. This is reference through and through.

The Green Knight gets a lovely English Dolby Atmos audio mix that places plenty of atmospherics in the height channels and chanting voices from the score, the booming gallop from the Green Knight’s horse and his voice has deep low-end extension in the LFE.

There are some interesting bonus features provided with self-explanatory titles. The ‘making of’ has some lengthy interviews with the director and behind-the-scenes features.

An interesting and introspective fantasy based on the Arthurian legend gets a brilliant 4K Combo release. This one has cult classic written all over it.

Load more
The Green Knight (4K Ultra HD Blu-ray Review)A young and reckless Sir Gawain (Dev Patel) takes a challenge from the Green Knight in order to earn a place in his uncle King Arthur's (Sean Harris) court, a challenge that will take him on a strange journey of self-discovery in this surreal and meditative fantasy adaptation of the Arthurian legend.