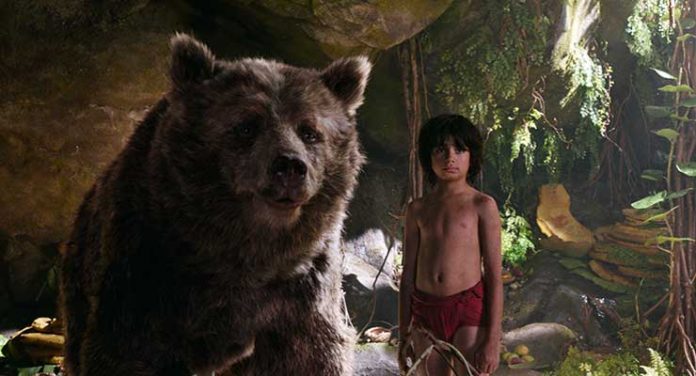 With the advances in CGI that allow for staggering amounts of realism in visual effects to be accomplished that were until now impossible in the days when Walt Disney himself first embarked on his quest to tell fantastical tales through animation, Disney has begun to reimagine those very tales in live action versions. 2014’s Maleficent and 2015’s Cinderella helped get the ball rolling, but it is director Jon Favreau’s reimagining of the collection of stories by Rudyard Kipling, The Jungle Book that is arguably the most successful to date.

The human child Mowgli (newcomer Neel Sethi) is raised by a pack of wolves to be one of them, but when threatened by the malevolent tiger Shere Khan (voiced by Idris Elba), Mowgli is rushed away from the jungle to the safety of the “man-village” by his mentor, the black panther Bagheera (voiced by Ben Kinglsey). Along the way, however, Mowgli meets a friendly but lazy bear named Baloo (voiced by Bill Murray), is charmed by a snake named Kaa (voice by Scarlett Johansson) who wants to devour him, and is kidnapped by a giant orangutan named King Louie (voiced by Christopher Walken) who wants to use Mowgli to get man’s power of the “red flower” AKA fire. The journey for Mowgli turns out to be one of inner growth and reflection on who and what he is.

Favreau’s Jungle Book uses dazzling CGI effects to build the jungle world that Mowgli inhabits and the talking creatures that surround him. That plays a big part in connecting this to the 1967 animated classic, because even as the imagery looks so realistic, it as that magical Disney touch that lets us know that we aren’t in a real place, we’re in a Disney jungle, were the greens are greener, the reds redder, and the shadows a little darker.

Screenwriter Justin Marks also wisely plays it just close enough to the original without making this reimagining a tedious retread. The first act places us with Mowgli and his family of wolves, and Lupita Nyong’o as Mowgli’s wolf mother Raksha adds a touching amount of heart to her character, setting up enough emotional weight from what will be the eventual closing act.

Favreau makes sure to keep most of the memorable tunes of Richard Sherman right where they belong, so we get the incomparable Bill Murray doing “The Bear Necessities” and Christopher Walken’s rendition “I Wan’na Be Like You”, but we don’t get to hear Scarlett Johansson singing Kaa’s “Trust in Me”, which is pushed to the closing credits.

In all, however, this is a touching story of personal growth and familial loyalty, despite the oddness of the settings, and it flows consistently with nary a low point. The 3D version tends to make it come alive even more and really hearkens back to the cutting edge technology of Walt-era Disney. 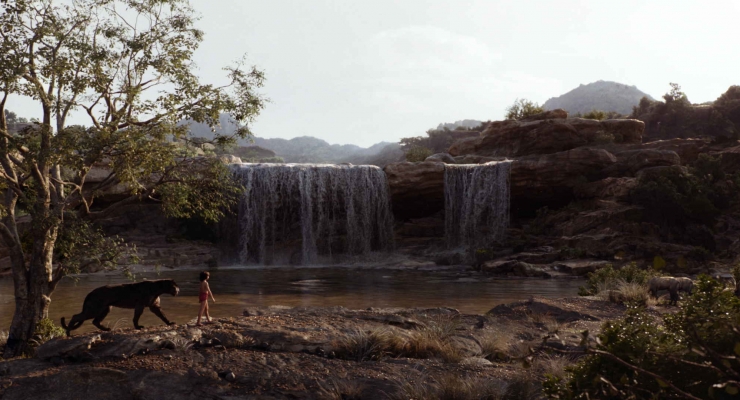 The Jungle Book was one of the few films in 2016 released in 3D that was a true 3D film and not a conversion. It was shot digitally on the Arri Alexa XT and it arrives here on Blu-ray 3D in an MVC 3D 1080p encodement and on Blu-ray in an AVC 1080p encodement. The 3D looks stunning, like a native 3D release should look. On my LG OLED65E6P I get only the slightest hint of crosstalk at the top extreme in some high contrast spots and in the lower right hand corner. Detail is pretty strong and there is an amazing amount of depth with little loss of contrast or color. The 2D disc is also stunning. The textures and colors standout, like during the scene with the snake Kaa as Mowgli goes into a daze or when he begins to run through the jungle at night with the “red flower.” It absolutely pops, in both the 3D and 2D versions.

Disney doesn’t give The Jungle Book an Atmos or DTS:X track, but the DTS-HD Master Audio 7.1 mix is no slouch and better than many of the Atmos and DTS:X mixes I have heard to date. The balance of sounds and the score, and the placement of discrete effects like dialogue, rain, growls, roars, and general sounds of the jungle is very engaging, bringing you right into the story and action. The low end is authoritative, so when the action picks up, such as in King Louie’s castle or when the elephants walk by, you really hear and feel it. Dialogue is crystal clear, full, and loud above all the special effects.

Disney includes lots of making of featurettes and an audio commentary in this collection. Everything here is actually very informational and includes lots of interviews with the cast and crew and behind-the-scenes footage.

The Jungle Book is the finest of Disney’s recent spate of live action reimaginings of its canon of animated fairy tales. Jon Favreau keeps the action kinetic while telling a wonderful story and honoring the original at the same time. The Blu-ray and Blu-ray 3D discs in this set are pure reference and should be on every enthusiasts shelf.