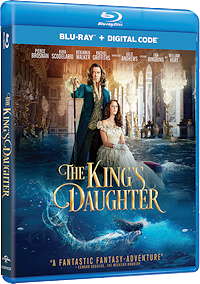 The King’s Daughter is a fairytale of sorts based on the novel The Moon and the Sun by Vonda N. McIntyre.

Pierce Brosnan plays Louis XIV, the Sun King. As he is aging, he is becoming concerned about his mortality. In steps spiritual advisor, Père La Chaise (William Hurt; A History of Violence, Black Widow), and the royal physician with a plan. They believe a mermaid a (Fan Bingbing; The 355, X-Men: Days of Future Past) contains a force that can grant Louis immortality. The king orders a sea captain (Benjamin Walker; In the Hearts of the Sea, Abe Lincoln: Vampire Hunter) to capture the mystical creature, which he does, and brings it back to France. Meanwhile, Louis brings his orphaned daughter Marie-Josèphe (Kaya Scodelario; Maze Runner franchise, Pirates of the Caribbean) back to court as the new court composer. The elegant and beautiful Marie, who grew up her whole life drawn to the water, develops an empathy for the captured creature. A solar eclipse is quickly approaching whereupon the deed must be done to extract the necessary element from the mermaid, but Marie wants to save the mermaid. Will she side with her father or the mermaid?

While this film can at times be visually appealing despite the rather poorly done CGI, the overall look, feel, and story just never come together the way one feels the writers (Barry Berman and James Schamus) and director (Sean McNamara; Mighty Oak) wanted it too. The acting from what is generally a solid cast from Brosnan to William Hurt is hammy and the storyline is convoluted at best. At least Brosnan gets a smart looking head of hair out the deal.

The King’s Daughter was shot on Arri Alexa XT cameras with Hawk V-Lite Vintage ’74, V-Plus, and Vantage One lenses in ARRIRAW (2.8K) and utilizes a 2K digital intermediate. It comes to Blu-ray in an AVC 1080p encodement framed at 2.39:1. This transfer presents this digital 2K production as well as one could hope. The image detail and nuance are held back by this being shot at 2.8K and having that 2K DI. There are some places where some in-camera noise and hints of digital sheen just keep it from looking as three-dimensional as possible. The CGI work doesn’t help either as it sometimes dissolves into amorphous glows of busy color. That said, there are no very bad issues like edge enhancement or color banding to speak of.

The sole audio option is an English DTS-HD Master Audio 5.1 mix that is quite engaging and fits this sort of fantasy fairytale material well. There’s good balance in the mix with the score nice and airy and given sufficient ambience. The foley effects have good ‘oomph’ in the low end and we can hear a mixture of sounds through the surround channels in the most active sequences.

There are two throwaway bonus features, including one silly deleted scene and a featurette where the cast and crew do their best to talk up how wonderful they believed this film to be.

This film is pretty much a trainwreck from beginning to end, but it looks and sounds great on Blu-ray.

The King’s Daughter is out on Blu-ray April 19, 2022 from Universal

Load more
The King's Daughter (Blu-ray Review)When the 'Sun King' Louis XIV becomes concerned about his own mortality, he sends a seas captain on a quest to bring back a mermaid so he can steal its lifeforce, but his orphaned daughter, newly brought back to court, has empathy for the creature and may disrupt his plans in this misstep of a fairytale/fantasy film from director Sean McNamara based on a Vonda N. McIntyre novel.