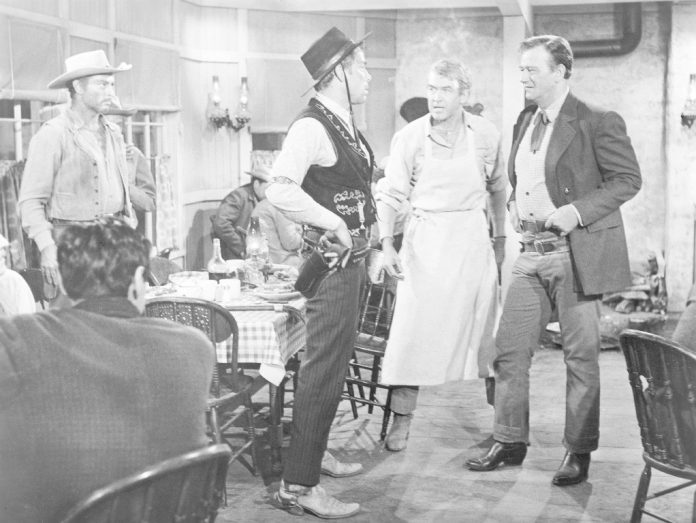 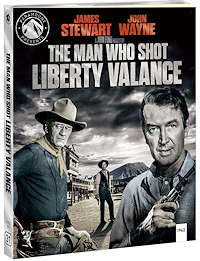 Aging screen legends James Stewart and John Wayne starred together for the first time in The Man Who Shot Liberty Valance, another epic western from director John Ford who takes the film and turns it into an exploration of truth, mythmaking, and the validity of war.

It’s 1910 and naïve lawyer Ransom Stoddard (Stewart) arrives with his wife Hallie (Vera Miles) in the sleepy frontier town of Shinbone in the dusty west where they first met a quarter-century earlier. He’s now a U.S. Senator and an inquisitive reporter wants to know why he has arrived. Ransom has returned to bury a ‘nobody’ named Tom Doniphon (John Wayne). The reporter pushes Ransom on who this Doniphon man is and what the senator has to do with such an insignificant man. He proceeds to recount in flashback to the reporter the story of how he arrived in the town years earlier and ran afoul of the feared Liberty Valance (Lee Marvin), a vicious henchman for a local cattle ranching cartel who feared no one in town other than Doniphon.

Doniphon is not a bad guy, but he is a tough one, and he is in love with Hallie, which means he will do anything to protect her and the people around her. Since Hallie has taken a liking to the hapless Ransom, that means he must protect Ransom. Doniphon is constantly trying to convince Ransom that the best protection he can get for himself in Shinbone is a gun but Ransom, ever the pacifist lawyer, is committed to using the law to bring down Vance. When things go sideways and Ransom ends up in a gunfight with Vance, the whole town believes Ransom is done for, until Vance ends up one the wrong side of the showdown and Ransom a local legend. What we find out later is Doniphon was lurking in the shadows somewhere issuing the fatal shot. It no longer matters, because the act launches Ransom into success as he is recruited as the representative to go to the capitol and help bring the territory into statehood while ridding the territory of the violence and corruption it has been overrun by. At the end of his story, Ransom asks the reporter if he will print the truth now that he knows he is not really the man who shot Liberty Valance, to which the reporter replies, “This is the West, sir, when the legend becomes fact, print the legend.”

John Ford infuses the film with his usual sense of grandiosity, but The Man Who Shot Liberty Vance is also a bit more scaled back and moody visually, with hints of film noir in its high contrast black and white imagery. The performances play well against this visual style, especially from the Eastern lawyer of James Stewart and the unhinged outlaw of Lee Marvin. John  Wayne plays the usual archetypal western hero, but his performance his just Wayne doing Wayne and you will either love it or dismiss it as too affectatious against the more nuanced performance of the other cast members.

Paramount lists The Man Who Shot Liberty Valance as being ‘meticulously remastered’ in 4K Ultra HD. As the Paramount Presents line comes from all new transfers directly from the Paramount vault, we can assume this to be an all-new restoration from the original camera negatives and, based on observation, likely some other sources to fill in a few areas where damage to the original negative much was too to overcome.  The film looks fantastic from the opening credit sequences with the names on the wooden signs, and this superb, stark black and white contrast with ultra-fine, organic grain structure and beautifully extended, inky blacks is pretty much what we see throughout except some areas where it seems they have spliced in frames from lower sources and the graininess jumps, detail and image stability take a hit. These are very few and far between and likely unavoidable for a film of this age. The 1.85:1 AVC 2160p (4K UHD) encodement with Dolby Vision has some outstanding balance in the contrast and very strong specular highlights, bringing this black and white film to a new dimension. The scene with the big fire really stands out, but even smaller things like the lamplights have just a bit more ‘pop’. The HDR Metadata for this disc shows a MaxLL of 199 nits and a MaxFALL of 32 nits.

The Man Who Shot Liberty Valance comes to 4K Ultra HD and Blu-ray with a restored English Dolby TrueHD 5.1 mix and the original Restored English Dolby Digital 2.0 Mono mix. The 5.1 is subtle but handled well. It doesn’t try to reinvent the wheel, so to speak, but rather gives the sound a little more breathing room. You’ll hear the subtle stereo effects of a horse carriage panning off to the left as it goes by on the screen, for instance. Mostly things stay in a tight forty to sixty degree angle around the center channel with very subtle atmospherics in the surrounds and even more subtle low end. The mono mix is a bit more contained but certainly more authentic and still quite listenable.

We get a very good selection of previously available bonus features on the included Blu-ray Disc including a thorough commentary with archival interviews by Peter Bogdanovich and a multipart documentary featurette. There’s also the new Filmmaker Focus with Leonard Maltin.

The Man Who Shot Liberty Valance like a fine wine has only improved with age. This film helped lay the groundwork for the reconstructed westerns that would follow in the 1960s and 1970s.  This Paramount Presents release is a nearly flawless 4K presentation that has this vintage black and white classic looking better than it ever has on home video.

The Man Who Shot Liberty Valance (Paramount Presents) is out on 4K Ultra HD Combo May 17, 2022 from Paramount.

Load more
A senator returns to the town where he shot the infamous outlaw Liberty Valance 25-years earlier for the funeral of an unknown friend and recounts the story of how it all came to pass to a newspaper reporter in this classic John Ford western starring James Stewart and John Wayne.The Man Who Shot Liberty Valance (4K Ultra HD Blu-ray Review)