The concept of a mummy’s immortality has provided fodder for at least one film per decade since the end of the silent era. This 2017 version of The Mummy is Hollywood’s latest take on this subject and has banked heavily on 55-year old film legend Tom Cruise.

Princess Ahmanet (Sofia Boutella) makes a deal with Set, the God of Death, who will make her Queen of Egypt in exchange for a human form. To mount the throne, she kills the entire royal family, then is entombed alive and transported to Mesopotamia (modern-day Iraq).

Former soldiers Sergeant Nick Morton (Cruise) and Corporal Chris Vail (Jake Johnson) are treasure hunting in the Iraqi war zone with directions stolen from British archaeologist Jenny Halsey (Annabelle Wallis) when they unexpectedly fall into Ahmanet’s secret burial site. Jenny arrives and, with Nick’s help, they fly the sarcophagus back to London only to have the plane crash, killing everyone on board except  Jenny who parachutes to safety. Nick miraculously revives in the morgue and later meets Dr. Henry Jekyll (Russell Crowe), head of the secret society Prodigium, housed in the basement of the Natural History Museum. “Eddie Hyde,” Jekyll’s evil alter ego, is kept at bay with frequent doses of a mysterious drug.

Ahmanet, freed from her sarcophagus, begins to restore her body by sucking the life out of innocent bystanders and turning them into aggressive zombies. Nick is “chosen” to become the human vessel for Set’s spirit and the mummy sends him disturbing visions.  Jekyll’s men capture the Princess and start to infuse her with mercury that will render her harmless. Ahmanet escapes and rains terror down upon London while seeking the ruby for the sacred dagger that will complete Nick’s spiritual transformation. Nick and Jenny team up against the mummy and we are treated to a fight to the finish replete with flesh-eating scarabs, crowds of dead crusaders, and life-and-death finale.

Brendan Fraser’s earlier Mummy films had truly fun characters and their intrinsic darkness was offset by  moments of comic relief. Except for the wry war zone exchanges between Nick and Chris (who makes subsequent “living dead” appearances), humor is conspicuously absent from this latest mummy reboot. This film’s only redeeming feature is the exotic-looking Sofia Boutella who is a sexy beast even in her partially decayed form. Annabelle Wallis is handed the bland role of the female foil while Russell Crowe delivers one cringe-worthy line after another (“we recognize, examine, contain, destroy”) courtesy of the screenwriting team of David Koepp, Christopher McQuarrie, and Dylan Kussman. Headliner Tom Cruise turns in his customary cardboard cutout “gee whiz” action hero but his part’s well soon runs dry as dialogue is simply replaced by violence. Director Alex Kurtzman, working on only his second feature-length film, seems to value CGI-effects over storylines and this mishmash of the undead, mad scientists, and world domination is relieved by interminable end credits that take on a life of their own. 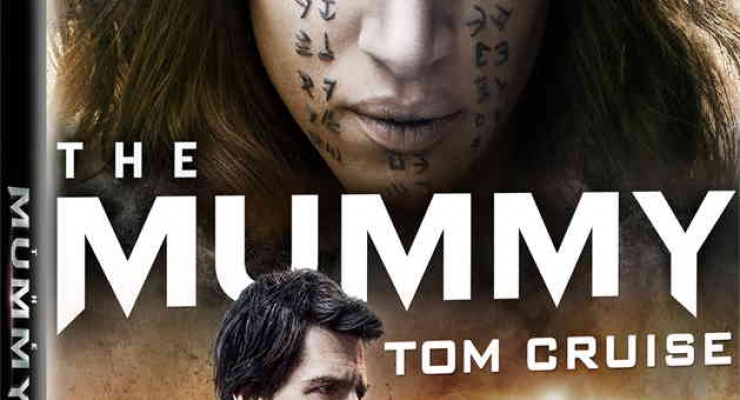 ARRI ALEXA 65 cameras fitted with a series of high-resolution lenses yielded several film formats for different scenes– ARRIRAW (6.5K) (source format), Digital Intermediate (master format) and Panavision (anamorphic) (source format) and Super 35 mm (source format). The resulting 4K Ultra HD version of The Mummy is stunning in spite of its frequently dark sets and the close-ups of Ahmanet’s exotic face are spectacular in their details. The HDR10 color palette is mostly exploited in the opening scenes and the occasional flashbacks to the desert. The Blu-ray version is also sight-worthy if not quite as detailed or dynamic as its UHD counterpart.

The Mummy comes with a Dolby Atmos (compatible with to Dolby TrueHD 7.1) that is potent, appropriately immersive and keeps the dialogue, such as it is, quite clear and upfront.

The generous Blu-ray disc has the following extras:

The only reason to give The Mummy a tumble is Sofia Boutella who debuted as the steel-limbed Gazelle in Kingsman: The Secret Service. Outside of the dubious benefits of Dolby Atmos sound and UHD picture, this film marks an inauspicious debut for the Dark Universe franchise.