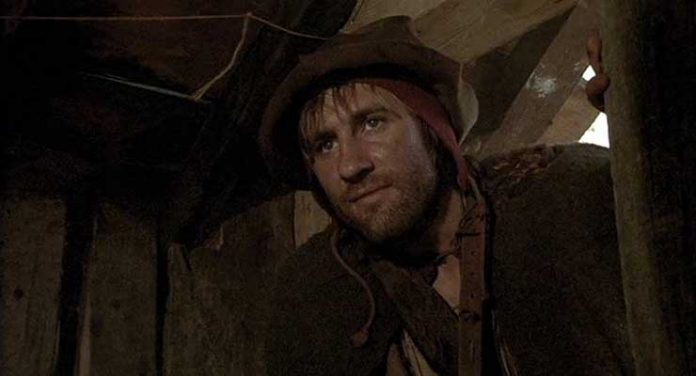 I may date myself here, but the first time I saw The Return of Martin Guerre (Le retour de Martin Guerre) I was in high school and my school’s headmaster — who also owned a travel agency and video rental store on the side – called me into his office in the morning. I thought I was in trouble, so I got nervous, but instead, he reached into his desk and pulled out the VHS copy of this film from his store and asked me if I wanted to borrow it. He went on a little about what a great film it was and so on. I said okay and took the tape, still a little perplexed, but that weekend I watched it and when I gave it back to him asked me, “what did you think?” I thought it was great and my opinion hasn’t wavered since then.

It’s the 16th century France and we first meet Martin Guerre (Gérard Depardieu) as a young man being wed to the beautiful young Bertrande (Nathalie Baye) whom he quickly neglects and leaves alone with their new child. Seven years later after being away at war, Martin returns to the small rural village where he left his wife and family members. He seems to be more mature now, wiser, and more tender with his wife and he settles in nicely with his old friends and family, even having another child with his wife, but a dispute over land and money with his uncle Pierre (Maurice Barrier) leads to accusations of identity theft and underlying suspicions bubbling up to the surface that the Martin Guerre who returned home from war is not the real Martin Guerre. Things reach a boiling point when some vagabonds from another town seem to recognize Martin as another man from their area and the local officials are called in to conduct a trial.

One of the classics of French cinema from the early 1980s, this film is marvelously directed by Daniel Vigne who both builds an authentic 16th-century world but also keeps viewers unbalanced every step of the way until the denouement. We are never really sure about the true identity of Martin Guerre right up until the end. Much of that is also down to the magnificent portrayals by Depardieu and Baye and the chemistry between them. The pair are charming and electrifying on-screen, Baye dazzling, beautiful, Depardieu charismatic and believable.

The film was taken from Janet Lewis’ novel, which itself was based on a real-life case from French history which had also been turned into a play and an opera. The visuals and costume designs – which earned an Oscar nomination for Anne-Marie Marchand – were taken from Bruegel’s paintings. It also earned three Cesar Awards.

Cohen provides this Director’s Cut of the film in a new 4K restoration framed at 1.66:1 encoded in AVC 1080p on Blu-ray.  The film has never looked better. Granted, there are scenes, particularly those in dark settings such as in a barn with little light or a room lit by little more than candlelight where there is a lot of low-level noise, but this is the production and not the transfer. Grain looks very natural and consistent with how this film has always looked to me and source damage has been brought to heel, so to speak, without detail being scrubbed clean and smoothed over.

The contemporary interview feature with Nathalie Baye is a solid inclusion in an otherwise barebones release.

A layered mystery, visually engaging, and powerfully performed, Cohen Film Collection brings an excellent 4K restoration of this classic to Blu-ray. This is one all cinephiles should grab up.

The Return of Martin Guerre is out on Blu-ray October 22, 2019, from Cohen Film Collection