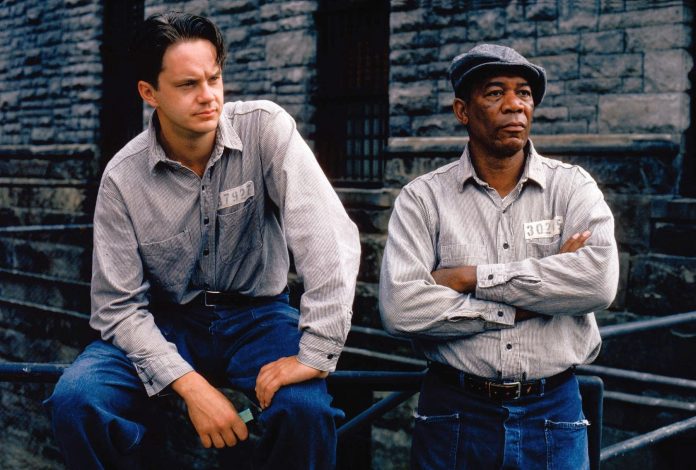 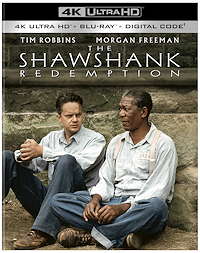 One of the most unexpected surprises of cinema in the past thirty years or so, The Shawshank Redemption, based on a short novel by Stephen King and directed by Frank Darabont from his own screenplay, the film is one of the most successful movies about friendship and living through the adversity of American prison life.

Tim Robbins stars as a banker named Andy Dufresne who in 1946 is convicted of committing a double homicide against his wife and her lover despite his protestations to the contrary. He’s sentenced to two consecutive life term at the Shawshank State Prison in Maine, where lifer, Ellis “Red” Redding (Morgan Freeman), picks him as the “fish” (the term for the new inmates) most likely to crack under pressure the first night. Andy doesn’t break, in fact Andy never says a word. But Andy is quickly initialized into the brutalities of prison life by the corrupt warden (Bob Gunton), the sadistic prison Capt. Byron Hadley (Clancy Brown), and the gang of rapists known as “the ladies” who seize upon the “fresh meat” they want in the prison and use violent beatings and rapes to get their way. He perseveres, becoming friendly with the prison’s go-to man for all things, Red, and using his banking skills to gain the favor of the warden and the guards, helping them out with their taxes and the warden with his corrupt dealings. This helps Andy gain favors for himself and his pals at Shawshank like an expanded prison library and safety from the Ladies.

The film spans many years and Darabont cleverly takes us through the decades with Andy and Red as their friendship grows. He also manages to use the camera well to both make us feel the claustrophobia of being locked away from the world while being able to make the world of the prisoners in Shawshank also seem larger than it is.

Robbins and Freeman are both flawless in this film, but Freeman, who also provided a voiceover, earned an Oscar nomination for Best Actor. The friendship feels legitimate and the growth of the characters true, especially as Red goes in front of the parole boards. From the casting to the scoring of the film and the setting, this is one that is both tragic and heartfelt; a timeless classic.

The Shawshank Redemption was shot on 35mm Eastman EXR 100T 5248 and EXR 200T 5293 film stock and dates from 1994. This new 4K Ultra HD Blu-ray release was remastered using a 4K DI and arrives framed at 1.85:1 with an HEVC 2160p (4K UHD) HDR10 encodement. It has a MaxLL of 833 nits and a MaxFALL of 108 nits. At first glance the film doesn’t look like the crispest and most natural looking transfer for a catalogue release. It has a bit of a smooth sheen and some definite grain suppression going on, but textures and facial details are reasonably retained as is depth of field detail. Examining the original Blu-ray release further reveals what an upgrade the 4K disc is and just how much cleaner and natural the film grain comes across on the 4K disc as the 1080p VC-1 encodement on the Blu-ray looks much softer and coarser at the same time with shadows a little more washed out as well.

The HDR presentation will also not blow you away, but there is just enough added ‘pop’ to the specular highlights in things like lamp light or the reflections in puddles of water to create a bit more depth and the drab color scheme also awakens on the 4K disc a bit with some more nuanced gradations.

The Shawshank Redemption on 4K Ultra HD gets a lossless English DTS-HD Master Audio 5.1 mix versus the previous (and included) Blu-ray Disc’s lossless Dolby TrueHD 5.1. The sound for this film is not going to blow you away with low-end sound effects and hyperactivity, btu what you will get is a beautifully balanced mix that is lush in atmospherics of the prison, full and clean dialogue, and a full, lush sounding orchestra for the score from Thomas Newman (Wall-E).

All the supplements are on the repackaged Blu-ray, except the commentary, which appears on both discs. There is nothing new included with this release.

A true cinematic classic that has been given a pleasing upgrade. I think most people will be more than happy with the step up this release offers over the Blu-ray. Recommended.

The Shawshank Redemption is out on 4K Ultra HD Combo September 14, 2021 from Warner Bros.