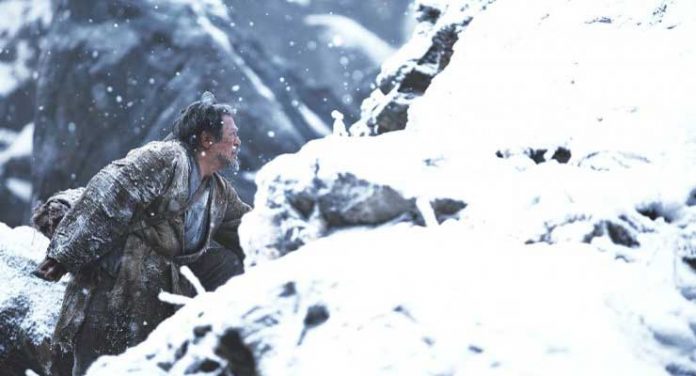 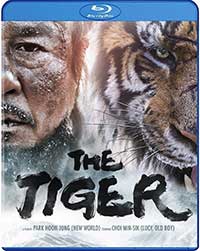 South Korean filmmaker Park Hoon-jung, known for penning the visceral crime drama I Saw the Devil and for writing and directing the crime thriller New World goes in a different direction with the epic man-against-nature historical drama The Tiger.

Staring Choi Min-sik (Oldboy) and set in 1920s Korea when the country was under Japanese Imperial rule, the story follows the old hunter Chun Man-duk (Choi) who has lost his will to hunt after losing his wife in a tragic accident years earlier. With the Japanese army demanding the Korean forests be cleared of all tigers and paying the local hunters and poachers to do it, Man-duk and his son are the sole hold outs, but the hunters come up against an insurmountable challenge. The terrifying and deadly tiger known to locals as “the mountain lord” has killed dozens of men and has gone without being captured, even as the hunters have killed its mate and cubs. Only Man-suk knows its trails and where to find it, and the Japanese are demanding he join the fight. Only the ultimate tragedy will bring the now aging and drunkard Man-suk into the hunt.

The Tiger in many ways reminded me of The Revenant in that it is a film about survival and overcoming personal demons. Park Hoon-jung seems quite comfortable switching from his usual genre of crime dramas to this historical fiction and adventure film, and he does an excellent job both slowly developing the character of Man-duk as well as making us feel sympathy for both the man and the tiger.

The tiger, a super-powered big cat generated in CG, is almost anthropomorphized in the way it is given “feelings” like rage, sorrow, pain. The tiger lashes out when it sees its cubs slaughtered, it gets enraged when it sees a group of hunters laying a trap for it, and it almost goes ballistic with glee, tearing man after man to shreds when a whole army troop is brought into the forest to try to kill it. This is the one part of the film that is too overdone. It takes focus away from the human story about Man-duk, his son, and the slow and painful resolution he arrives at when he must finally face down the tiger once and for all.

The Tiger is a rather desaturated film that won’t wow you with its palette or even with an onslaught of visual effects, outside of the CGI tiger and the forested mountain backdrop of its setting. That said, this AVC 1080p encodement on Blu-ray from Well Go USA looks stellar, with little problems outside of some small banding in darker areas. The textures are crisp, brining out all the finer details in the image, including individual strands of fur in the tiger or each snowflake that falls in the icy forest. Shadows are well delineated and there isn’t much of an issue with crush.

The original Korean soundtrack is included in both DTS-HD Master Audio 5.1 and Dolby Digital 2.0 stereo. The 5.1 mix is really good at accentuating the growl of the tiger. It has a big, rumbling low-end – you don’t want to watch this film alone at night with that big cat creeping up from being you. The dialogue is all clear and full and gunshots ring out nicely without a harsh high-end. While there are a good amount of atmospherics and the score is well balanced throughout the channels, I don’t get a sense of very distinct discrete sound effects at all times, only the occasional directional pan of the tiger or gunfire, or some dialogue. It’s a little spotty, but still enjoyable.

This is a barebones release with nothing included but trailers.

A bloody, epic film about the struggle against nature and one’s own inner demons, The Tiger is filled with awesome visual power and, at the center of it all, a powerhouse performance from veteran actor Choi Min-sik who is constantly proving his flexibility as an actor. The Blu-ray release from Well Go USA is also quite satisfying visually, although the lack of extras is a minus.