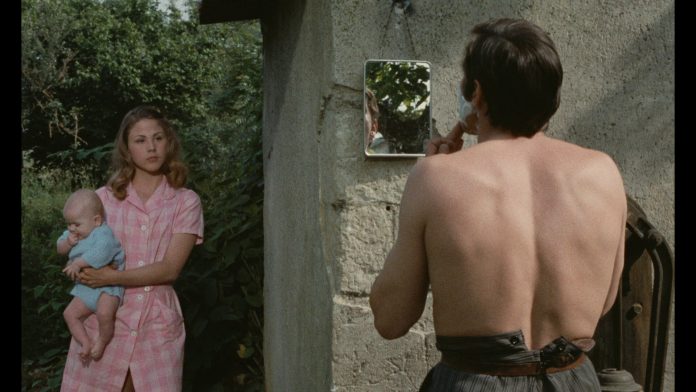 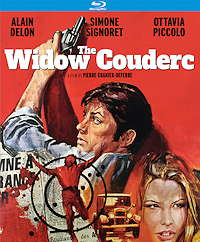 The dark and slow-moving French melodrama from Pierre Granier-Deferre based on a novel by Georges Simenon, The Widow Couderc (La veuve Couderc) explores the idea of love between a younger man and an older woman, something that even today seems like a taboo to many people.

Simone Signoret (Diabolique, Room at the Top) plays a strong-willed widow in a small town where she seems isolated from the rest of the townsfolk for her individualism and is feuding with her sister-in-law. When the handsome young Jean (Alain Delon, Un Flic, The Sicilian Clan) passes through town, the widow allows him to stay with her and work on her farm. Jean is drawn to the widow, her toughness and individualism, and she is drawn to his dark mysterious past and his youth, longing for a true love she never had with her first husband she was forced to marry at a very young age. They carry on a secret affair that goes awry when Jean succumbs to his passions and falls for her sister-in-law’s seductive daughter Félicie (Ottavia Piccolo, The Leopard).

The film plays out against the verdant imagery of the French countryside and Pierre Granier-Deferre uses long takes and very limited jump cuts to reinforce that languorous pace of country living and the intensity of the drama the film is building toward. Signoret carries the film with her commanding performance, especially in the moment where she first learns of Jean’s sleeping with Félicie. The feeling of her pain and sense of loss is palpable. This is a superb melodrama that is both wonderful to look at from a visual sense and one that hits you in the gut.

The Widow Couderc is a 4K restoration from the original 35mm camera negative and brought to Blu-ray in an AVC 1080p encodement framed at 1.66:1. Apart from some frames that look a little soft and have the grain a little coarser, this is a very good restoration and transfer of this 1971 film. In the opening act there are shots of beautifully verdant grass, vibrant flowers, very sunny day, and we see the thinly layered grain, inky blacks, and natural flesh tones. Detail is excellent as we can see the black buttons on the widow’s black dress with no issue or the lines on her brother-in-law’s brown cardigan sweater.

The French monaural audio is presented in DTS-HD Master Audio 2.0 and it sounds well enough for this very dialogue-driven film. There is no clipping, hiss, or pops and the dialogue is clean.

The audio commentary from Bryan Reesman packs in a lot of information as he easily goes from one topic to the next, be it films Delon appeared in, ageism in the filmmaking industry, or the differences in the film from the book. Great stuff.

This is a top-notch restoration of a fine melodrama with an A-list cast. Kino Lorber has struck gold with this classic. Highly recommended.

The Widow Couderc is out on Blu-ray July 6, 2021 from Kino Lorber

Load more
In the French countryside a strong-willed widow (Simone Signoret) who is feuding with the townsfolk and her neighbor/sister-in-law, welcomes a handsome stranger (Alain Delon) who is passing through to live with her and work on her farm. The two have a secret affair until it goes tragically awry when he falls for her sister-in-law's beautiful young daughter (Ottavia Piccolo). Brandon A. DuhamelThe Widow Couderc (Blu-ray Review)