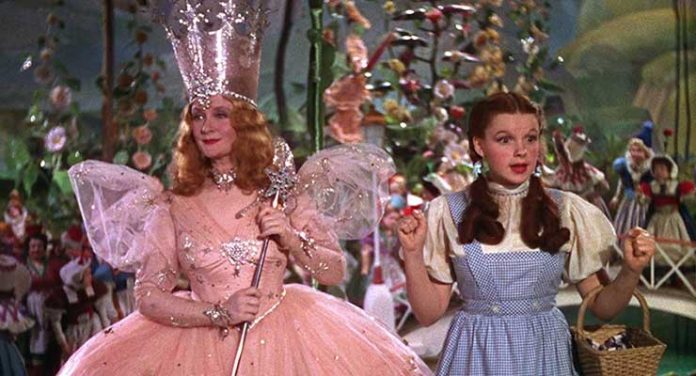 It’s been eighty years and MGM’s telling of the L. Frank Baum children’s tale The Wizard of Oz still captivates the world. Judy Garland as Dorothy and her motley crew of companions, The Scarecrow seeking a brain (Ray Bolger), The Tin Man in need of a heart (Jack Haley) and the Cowardly Lion looking for courage (Bert Lahr) battling the wicked witch of the west in the candy-colored land known as Oz on their journey down the yellow brick road to go see the all-powerful wizard, (Frank Morgan) so that he may grant each of them what they seek has entered the world’s collective consciousness. It has gone beyond become simply a movie and has become a cultural icon. It has given us phrases that have entered the common dialogue, like “we’re not in Kansas anymore” and timeless songs, like “Somewhere Over the Rainbow.” The film is as much a symbol of Americana as cowboys, baseball, and apple pie. When Bernie Taupin and Elton John set out to write their ode to Americana, what else would they seize upon but the iconographic imagery of The Wizard of Oz in their double-album, Goodbye Yellow Brick Road?

The stories of the tribulations on set and are now legendary. The switching between three directors, actors falling ill, the horrendous working conditions and the hazards of the still-new special effects. It didn’t seem to matter. At the end of it all, The Wizard of Oz all fell into place to become the beloved classic that it is today.

Ironically, the film might not have seen the light had it not been for the tremendous success of the previous year’s Snow White and the Seven Dwarfs from Walt Disney, a film many had doomed to failure before it hit the screens. The Wizard of Oz would not reap the same financial rewards of Snow White on its initial run, however. Due to its exorbitant budget and enormous competition from other films in the same year, such as Gone with the Wind and Wuthering Heights, Oz would have to wait. Its success would grow over the years as it was re-released to theatres by MGM and, eventually, with the advent of television, The Wizard of Oz would become an annual event and seen by more people around the world than any other film.

I remember watching The Wizard of Oz on television as a small boy in the 1970s. The first time I saw it, it must have been on a tiny black and white screen that couldn’t have been any larger than ten inches, but it didn’t matter to me. In fact, it was some years later that I finally discovered that the film switched from black and white to color once Dorothy entered the world of Oz. But even in that tiny grey world, the power of Oz was enough to capture my imagination.

This new 4K Ultra HD release of The Wizard of Oz comes from a new 8K 16bit scan of the original Technicolor camera negative, which became the basis for the 4K UHD scan. The process was overseen by MPI colorist Janet Wilson, who has overseen every remaster of the film for the past 20 years. The film arrives on 4K Ultra HD with a 1.37:1 HEVC 2160p (4K) encodement with both Dolby Vision HDR and HDR10+. My LG OLED display supports Dolby Vision and this new restoration looked awesome. The film has looked fantastic on home video for the past ten years thanks to the 70th anniversary restoration that has been available on Blu-ray since 2009 and 3D fans were even treated to a 3D conversion that is fun to watch.  Now, in this new 4K transfer, things look just a little bit crisper, but not totally different from the previous restoration. The grain structure is a little more refined, but it is the HDR that kicks things up to another level. Even in the first part of the film where it’s black and white, the Dolby Vision offers up a little more nuance in the contrast and some slight ‘pop’ in highlights. Look at the scene where Dorothy meets Professor Marvel in his carriage – the candlelight stands out more as do the reflections from his crystal ball. The real highlight, of course, is when Dorothy reaches Oz and we are in the Technicolor portion of the film. From the moment we first see Judy Garland’s face we can see that the rosy hue on her cheeks stands out more than on the Blu-ray. There’s also more sparkle in Glinda’s dress. The effect applied to The Wizard of Oz is tasteful and subtle, but very well done for this classic.

The Blu-ray seems to be a simple reissue of the previously available restoration. I compared the Blu-ray from the Collector’s Edition, 3D edition, and this 4K release and they all match up visually and as far as special features and menus go.

There’s one bad part about The Wizard of Oz on 4K Ultra HD and it is that for some odd reason Warner has left off the original mono mix, which has been and remains available on the Blu-ray.

The 5.1 mix is now included on the 4K Ultra HD disc in DTS-HD Master Audio. 5.1 The mix sounds clean and dynamic. There are little details that can be heard that come through with a bit more clarity than in the monaural mix where more clipping can be heard.

The supplements included here are mainly port-overs from the previous Blu-ray and DVD releases including a number of archival, standard-definition featurettes.

This perennial family classic looks and sounds beautiful in this new 4K Ultra HD release coming in time for its 80th anniversary.