Until the End of the World (Criterion Collection) (Blu-ray Review) 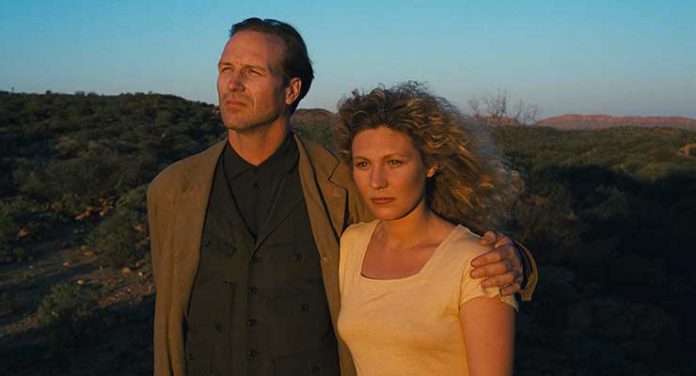 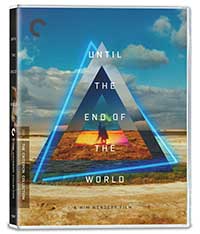 Who says you should never let a director have free rein? The badly gutted theatrical release of Wim Wenders’ Until the End of the World was not a very compelling film, even at its 158-minute run time, but when the film was finally able to see release in its epic 287-minute “director’s cut”, that is when it was finally able to come into focus, so to speak. Four-hours-and-forty-seven-minutes may seem unmanageable – and even I have to admit to watching this film in a few sittings to fit it into my schedule – but it is five hours that are well worth spending.

Billed as the ultimate road movie, Wenders shot in 1990 and envisioned the world a mere 10-years ahead at the turn of the century, in 1999. As an Indian satellite is about to crash into the planet, the protagonist Claire Tourneur (Solveig Dommartin) finds herself caught in a traffic jam and coming into contact with a mysterious stranger (William Hurt) who steals some of her cash and has possession of a strange device that can record people’s dreams and bring them to life. The search for the stranger leads Claire on a cross-continent trek with multiple characters, including her ex-boyfriend and a missing persons detective.

The film is not only epic in its visual scope – there are beautiful shots of the Australian outback, and early high-definition video dream sequences —  and time, but also its musical soundtrack which contains songs from artists such as U2, Talking Heads, Depeche Mode, Patti Smith, Lou Reed, Neneh Cherry, Nick Cave & the Bad Seeds, and more who were all asked by Wenders to imagine what their music might sound like ten years in the future.

Wenders captures much of the zeitgeist of the 1990s in this film and predicted much of what was to come, such as video calls, the heavy influence of networking, and search engines, and the interconnected condition the world at large was heading toward.

Supervised by Wim Wenders, this digital transfer of Until the End of the World was created in 4K resolution on an ARRISCAN film scanner from the original Super 35mm camera negative at ARRI Film & TV Services in Berlin, where it was also restored. The film is presented on Blu-ray in its original 1.66:1 aspect ratio in an AVC 1080p encodement. It looks beautifully rich in color and detail, with a clean, crisp, organic film structure, vibrant blues, yellows that ‘pop’ and magnificent earth tones. The shadows are nicely nuanced without any crush and only the slightest hints of noise in the rare frame.

The 5.1 soundtrack was remastered by the Wim Wenders foundation from the original 35mm magnetic tracks and approved by Wim Wenders. It is provided on Blu-ray in a lossless DTS-HD Master Audio 5.1 track that is clean, punchy, and atmospheric when needed, such as an airplane flying overhead or the ambience spreading out when the musical soundtrack kicks in.

Criterion includes an excellent selection of supplements all worth watching and a booklet with in-depth essays.

The Criterion Collection has done it again with another masterful release of an arthouse classic. This film not only looks great, but this is the definitive cut of the film and is released alongside some solid new and archival supplements.

Until the End of the World is out on Blu-ray & DVD December 10, 2019, from Criterion Collection