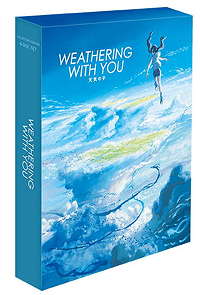 The English version of the film, features an all-star voice cast including Lee Pace (Guardians of the Galaxy, The Hobbit Trilogy), Alison Brie (“GLOW”, The Lego Movie franchise), and Riz Ahmed (Rogue One: A Star Wars Story, Venom).

Before I get into the technical aspects of the video, let me first point out that Shout! Factory and GKIDS have region coded this 4K disc! Something that is technically not supposed to be a thing with this format and is the first time I have come across this. I had my Pioneer UDP-LX500 left on Region B since I was reviewing a UK Blu-ray before I slipped this disc in without a thought and got a region code error. I tried it again a few times before I switched the player to Region A and it accepted the disc. Shame!

Anyway, moving along, Weathering with You arrives on 4K Ultra HD Blu-ray in a 1.78:1 HEVC 2160p (4K) encodement taken from a 2K DI with Dolby Vision HDR. The digital hand-drawn animation was purportedly rendered in 4K, so why a 2K DI was used is perplexing. That said, the Dolby Vision grading looks beautiful, with highlights that really ‘pop’ from the screen, like the glistening of raindrops, the glint of light on windows, the sparkle of the cityscape at night, or the sunlight on the horizon. That said, there have been complaints about the Japanese 4K release showing some sharpening effects compared to the Blu-ray and I have to say that this US version at first seems to show some issues, but comparing it to the included Blu-ray at least, many of the issues that seem to be sharpening related are still there, only not as visible, such as some motion artifact on the CGI boat at the beginning of chapter two at the 00:04:04 mark or some aliasing on the walls of the ferry. A closer inspection shows these things are only being heightened by the lower compression and upscaling to 4K. Overall this is one of the best 4K releases of a hand-drawn animated film I have yet to see.

The 4K Ultra HD Disc for Weathering with You comes with a number tracks, but the two main ones for our purposes are the original Japanese-language track and the star-studded English dub, both offered up in lossless DTS-HD Master Audio 5.1. This is a superb mix with a delicate balance between whisper-quiet and fairly loud and filled with lush atmospherics that fill the room such as rainfall, breeze moving through trees, or the sound of the cityscape. The musical score is also nicely spread across the channels and balanced well with action and clean, clear dialogue. Both Japanese and English tracks sound just as good with maybe the Japanese dialogue sounding a little fuller by a hair.

The Collector's Edition of Weathering with You comes packed with a number of excellent collectibles and a bonus feature-length making of documentary on a separate Blu-ray Disc. This one is certainly worth the price of entry. See below for what's included and what's exclusive to the Collector's Edition.

A beautiful film with a beautiful 4K Dolby Vision transfer packaged in a feature-rich collector’s edition. This is one for anime fans, families, and collectors alike. Highly recommended.

Weathering with You (Collector's Edition) is out November 17, 2020 from Shout! Factory & GKIDS