Westworld Season 1, subtitled “The Maze”, takes writer/director Michael Crichton’s 1973 sci-fi action/thriller about a robot Disneyland for adults gone haywire starring Yul Brynner as a robot gunslinger with his wires crossed who turns on park guests James Brolin and Richard Benjamin, hunting them down relentlessly and turns it into a sleek and philosophical exploration of what is means to be human.

Set in an unspecified near-future where much of the action takes place in a fantasy world set in an alternate reality version of the Wild West, Civil War era past, West World Season 1 tracks roughly three separate story arcs about a high-tech amusement park for adults populated by lifelike “hosts” – androids so human that it is hard to tell they aren’t living creatures. A corporation named Delos operates the Westworld park that has as its selling point these hosts and its “narratives” where adults can indulge their fantasies way from the real world. For instance, there’s a Wild West brothel run by the host Maeve Millay (Thandie Newton), or the seemingly innocent farmer’s daughter Dolores Abernathy (Evan Rachel Wood) – one host who, it seems, begins having memories of some of the past stories she’s been used in – who one visitor to the park or “newcomer”, Billy (Jimmi Simpson) is drawn to and believes to be sentient. Then there’s The Man in Black (Ed Harris), a rich and powerful businessman in the real world who has been coming to the park for years seeking some meaning in his life. Playing the typical villain, he is now own a quest to find the center of a mythical maze he believes will unlock the hosts and give them free will and give him that meaning he has searched for. His journey always makes him cross paths with Dolores.

Another thread Westworld Season 1 follows is inside the control center of the park with one of its founders, Dr. Robert Ford (Anthony Hopkins) and his assistant Bernard (Jeffrey Wright). As the hosts begin to exhibit some odd behavior – Maeve asserting what seems like off script actions, Dolores’ father having a “breakdown” over a photograph left by a guest to the park, another host smashing a rock over his head – Bernard and to a certain extend Dr. Ford begin to investigate and it leads to supervising revelations about the host program, a strange voice the hosts are all hearing, and the co-founder of the company.

To call this series brilliant drama and science fiction is an understatement. The co-mingling of both alternate history, parallel stories (there’s a big reveal at the end where you’ll find that, what you thought was going on and what is the present isn’t really) is deftly handled. In fact, there are two big revelations in this first season one may be more obvious than the next. The final episode leaves this series with so many places to go, and I’m ready to take the ride. This could be the perfect replacement for Game of Thrones HBO is looking for – fingers firmly crossed. 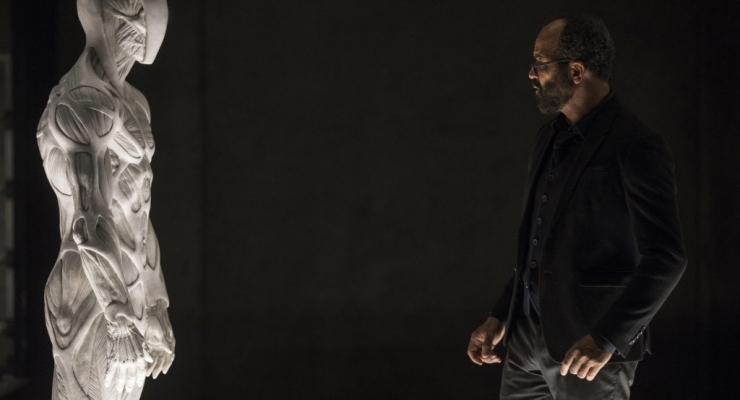 This Ultra HD release arrives in a 2160p (4K) HEVC encodement with Dolby Vision HDR (High Dynamic Range) framed in its original 1.78:1 broadcast aspect ratio. I expected to be blown away by this sci-fi series’ imagery in 4K, but I wasn’t really. The 2K source looked okay and filmic, but there were also some spots where I saw some clear softening of features in facial characteristics, almost like over-eager DNR going on. That would be odd considering that the image looks somewhat gritty, as one would expect this Super 35-sourced series to look on 4K, especially compared to the Blu-ray, where the grain is a little less upfront. Don’t get the impression that I’m a grain hater, because I’m not, but I do think this is one that may have looked better if a 4K DI had been used.

Now, on to the Dolby Vision – it definitely adds a bit more ‘pop’ to some highlights, but it is subtle in some places and in some places, perhaps because of the visual effects and the upscaled resolution on top of it, it looks a little gimmicky. Fires certainly look wonderful in most spots, but there were some places where they looked a little unnatural. The colors in the park control center really standout, especially the red-lit background. The Westworld outdoor scenes look just a little more natural, but I don’t see as many additional gradations in coloring I normally see with the wider color gamut. I also see a lot of black crush in the darkest scenes — Man in Black and Dr. Ford suffer the most. The Blu-ray, which is a very fine presentation seems to be the more even presentation than the 4K release here.

Westworld: Season 1 on 4K Ultra HD comes with an Atmos mix that is more atmospheric than it is aggressive or discrete, but this sort of mix works for this type of material. What you will notice compared to the DTS-HD Master Audio 5.1 mix on the Blu-ray is that the piano in the opening theme is a little more spacious and gets more height ambience, this carries on throughout the episodes for the score and other sound effects that are nicely balanced. The dialogue sounds equally full and mostly centered in both mixes. There are some moments in the series, such as when the character Elsie Hughes heads down into the lower levels of the park control center to investigate that the ambient effects really turn up a notch, I have heard more aggressive and perhaps more effective Atmos mixes in the reissued Game of Thrones SteelBooks, for instance, but this is a very fine effort nonetheless and, as mentioned, more well suited to this sort of series.

These are a solid slate of extras included with Westworld Season 1. I would have liked to see something a little more robust and interactive like a trivia track or a character connections map.

Westworld Season 1 is brilliant sci-fi drama that explores the human experience, what it means to be alive, and mines the depths of the human soul. The imagery is brilliant and the characters are all ones that we want to follow. The 4K Ultra HD is a mixed bag when it comes to video quality, but it is still a big step above any broadcasts or streaming versions as is the more consistent included Blu-ray version.