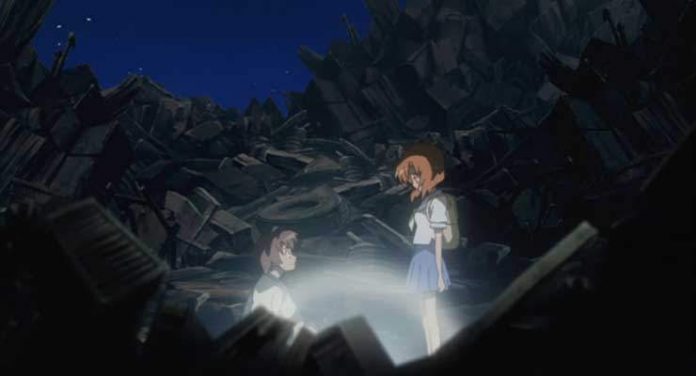 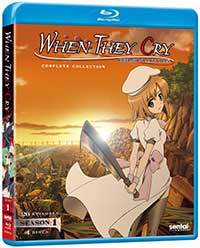 When They Cry is an ambitious anime series based on a visual novel series. The anime takes place over the course of six story arcs or “chapters” four of which setup a number of murder mysteries, and the remaining two reveal a number of answers to some unresolved questions from the previous chapters, although they don’t follow exactly the same timeline as far as I could tell anyway. The story is set in 1983 where male transfer student Keiichi Maebara comes to a seemingly idyllic rural village in Hinamizawa. There, he befriends his new female classmates Rena, Mion, Rika, and Satoko and joins their activities club where they play games like cards, board games, and punishment games. But Keiichi soon finds that there is a strange and violent history to this village attached to a dam building project and that his new friends are conspiring to hide things from him. And, every year during an annual festival, at least two people die in horrible ways.

Normally when there is an anime series taken from a game and/or visual novel, I find it difficult to get through

because the story just doesn’t ever seem to transition well to the more linear medium of anime. In the case of When They Cry, I can’t say that holds true. While it is not wholly linear here, the way the story is told manages to combine some elements of linearity with the non-linearity of its source. It’s unique and almost owes a debt to the likes of Tarantino the way it jumps around its various turning points.

That said, this series is brutal. The violence is no joke here. The way the series begins (in fact the way every arc begins) lulls one into a false sense of ease. There’s an easygoing, comedic atmosphere with a moe character design for the female characters, but that quickly dissipates into terror, bloody violence, and supernatural thrills. The repetitive nature of this (this pattern plays out in each arc) makes the violence even more impactful and unforgettable. The series stirred a lot of controversy in its native Japan when a police officer was murdered by his sixteen-year-old daughter with an axe and the excessive violence of series like When They Cry (one of the characters wields a hook cleaver) was blamed, eventually causing the series to be pulled from broadcast.

When They Cry is not the sort of series that can be taken in in a binge viewing manner. It’s repetitiveness and overwhelmingly dismal atmosphere can make it difficult to sit through in big chunks, but apart from that, it’s a pretty brilliant piece of work.

When They Cry is a series that dates from 2006 and was done in standard definition. It shows in this Blu-ray release from Sentai Filmworks, which is offered up in an up-scaled 1080i AVC encodement. The animation looks fairly soft and motion artifacts can be spotted in the panning shots. Colors are also not as vivid as they would have been had this been a native HD release. That said, this surely offers a step up from DVD given the breathing room the format offers, providing far less compression and more bandwidth, but it is not the giant step up it would be going to a true HD release of an HD source.

superior in capturing the neuroses and suspense of When They Cry, although the English cast seem tolerable during each chapter’s initial opening “comedic” prologue. The sound mixes are decent, although they don’t seem to be quite as expansive and dynamic as some of the best stereo mixes I’ve heard from Sentai, perhaps owing more to style changes from sound engineers over the years.

There’s nothing much here, despite being a 4-disc Blu-ray set, all we get are the clean opening and closing animations and Sentai Filmworks trailers.

When They Cry will not be for everyone, but if a multi-level supernatural mystery with an excessive amount of violence is up your alley, then this 2006 series may be for you. If you don’t go in expecting this SD-sourced set to look sparkling you’ll be more than satisfied.