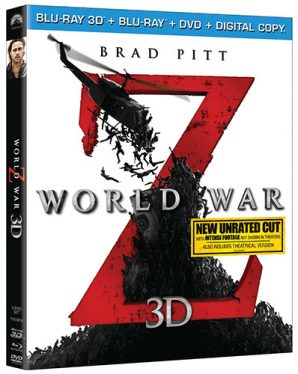 Brad Pitt takes on the zombie apocalypse in this adrenalin-fueled action/horror flick by director Marc Forster (Quantum of Solace; Machine Gun Preacher) from the book by Max Brooks. After a couple of decades of vampires claiming the coolness crown, it seems that zombies are back, with series like The Walking Dead heating up the airwaves and internet theories about a “real” zombie apocalypse. Of course, zombies have never been sexy, they’ve always been the pariahs of the horror world – slow-moving, dimwitted, vile. Ask George Romero, who pretty much created the entire mythology surrounding these creatures.

World War Z doesn’t stray far at all from Romero’s zombie mythology in how it portrays them – they are undead, they can only be killed with a bullet to the head or by being burned, they have an insatiable appetite for live human flesh, and they pass on their affliction through biting you. Where the film differs form any given George Romero film is its lack of social commentary and any sense of humor whatsoever. World War Z, instead, goes for big Hollywood action – nonstop, go for for broke special effects like explosions, car crashes, plane crashes, gunfights, and a self-sacrificing hero who must save the world.

That hero is Gerry Lane (Pitt), family man and former U.N. Employee, who is re-enlisted by the U.N. To help halt a worldwide zombie pandemic that has toppled every major city and government. After a death-defying race out of Philadelphia with his wife (Mireille Enos) and two daughters amidst absolutely chaos in the streets, wherein they manage to make it to Newark, New Jersey, finding temporary shelter in an apartment with a family, Gerry, and his family, along with the young boy of the family they stayed with – his family all turned into zombies — are airlifted to safety aboard a U.N. ship off the coast of New York. In order to keep his family aboard, however, Gerry is instructed that he must travel to the military base in South Korea to seek a solution. Of course, the South Korean solution doesn’t pan out, but it leads to another clue that sends Gerry heading to the Middle East, where he learns about where the pandemic began, and the dangerous hunt for patient zero begins.

In making this sprawling zombie epic, Marc Forster completely misses the tongue-in-cheek, subversive attributes of the very source material the film is taken from, World War Z: An Oral History of the Zombie War, itself an expansion of Brooks’ The Zombie Survival Guide. Rather than making smart and witty take on the brain-dead genres we are often fed (pun intended), the film instead unabashedly lifts every previously used cliché mythos, only bigger. Albeit, the action here works, and Pitt is likable in World War Z.

What we have here, with World War Z, is yet another “3D” film that is nothing more than a conversion from a 2D production. The film was originally shot with a combination of high definition on Arri Alexa M and Arri Alexa Studio cameras, and Super 35 film stock on the Arriflex 435. On the Blu-ray 3D, the 3D conversion is, in all honesty, one of the better looking conversions out there. It shows some good depth. For instance, when the family are leaping from the rooftop to the helicopter, there’s good separation and a realistic sense of height as the camera catches the scene. No real flattening occurs throughout the film, but there is also no strong pop-out from the screen, as one would see in a true 3D production.

The 2D disc has a much stronger picture in its AVC/MPEG-4 1080p encodement. The first thing you notice is that it looks just a bit crisper than the 3D image, and some scenes where there is some heightened grit don’t necessarily appear as gritty in the 3D presentation. Whether this is purposely suppressed in the 3D or a byproduct of the glasses and somewhat dimmer image is hard to tell. What you get here, however, is a fantastic presentation of a contemporary film that will nicely show off the abilities of your display.

A 7.1 DTS-HD Master Audio (48kHz/24-bit) track is the main audio option for World War Z on this Blu-ray release, 2D or 3D, from Paramount. It is a cleverly mixed, aggressive soundscape that smacks you in the face from early on. While it does seem just a little pushed to max, the quieter moments never really getting to a real hush, the big sound, deep lows and clean high frequencies will get your adrenalin flowing. It works for the material really well, and the dialogue never gets lost.

Unfortunately, we aren’t given much here at all on disc worth watching. A few production featurettes of the promotional/press-kit variety that don’t offer up much information.

In many ways, World War Z is a disappointingly brain dead take on the Max Brooks source material from which it was taken. That being said, as summer blockbuster entertainment that allows you to sit back, enjoy the A/C and the wild ride, it works. It takes all the key elements from the well established zombie mythos, turns them up to 11 and offers up some astounding visual effects.