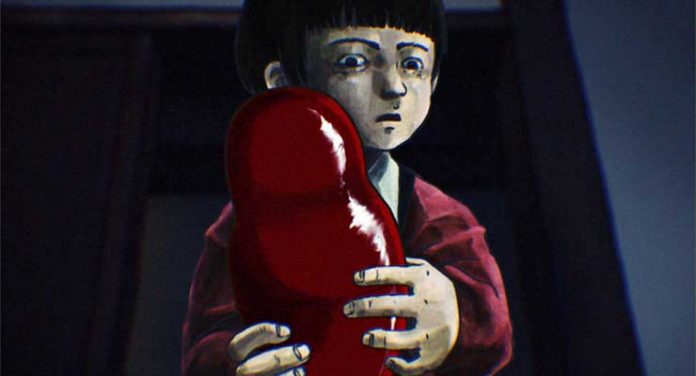 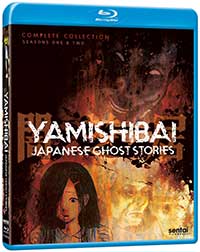 Yamishibai: Japanese Ghost Stories is a collection of brief (roughly five minutes each) ghost stories based on Japanese myths, folklore, and urban legend. The stories are both animated and told in what is called the traditional kamishibai or paper drama method, a roll of paper drawings as a story is told. To Western animation audiences, this animation imitating the style imitating this “paper drama” will look like most likely look like a motion comic. Each episode begins with an elderly man in a yellow mask on a children’s playground gathering the kids all around them to tell them these ghost stories.

If you imagine the kind of scary stories you might gather around a camp fire in the dark and tell to get a rise out of your companions, or at a sleep away when you

were a kid, then you’ll have an idea of the sort of tales that are in Yamishibai. As an example, the collection gets started with the “The Talisman Woman,” the story of a man who moves into an apartment and finds a talisman stuck to his roof. When he notices a woman across the street mouthing something to him, he finds it strange, and later he finds the woman in his room and she is arrested for breaking and entering, but he also finds dozens of talismans stuck under his coffee table. After removing them, he is swarmed by hundreds of ghosts, which he tries to tell himself are not real. Another tale is “Hair,” where a woman is working late at the office alone in the dark when the copy machine starts acting weird. The copies are coming out with odd black lines on them When she

looks under the scanner lid, she sees long, black hair that slithers into the copier. Taken aback, she tries to fix the machine and suddenly, in the shadows, an apparition, a girl with long dark hair, appears behind her.

The style of animation and the fantastic voice work only help to heighten the scariness of the stories. The frozen looks on the characters faces, the worried sounds in their voices – it will have you on the edge of your seat. Some of the stories could come right out of the old Twilight Zone series, don’t necessarily make sense, and they aren’t meant to. They are meant to evoke an emotion, a mood, a feeling. These would be perfect to watch over Halloween festivities.

Although this set is marked as “complete collection” it only has seasons 1 and 2. Season 3 is not included.

Yamishibai: Japanese Ghost Stories is provided in an AVC 1080i encodement on Blu-ray from Sentai Filmworks. The video isn’t the crispest looking, partly due to the artistic intent and partly due to the interlaced encodement, but it is satisfying nevertheless. There is purposely grain and “surface damage” added to the digital animation, which as a dull, earth tone color palette that although it doesn’t pop does convey the sullen, spooky mood of the tales being spun.

The original Japanese audio soundtrack is included in DTS-HD Master Audio 2.0 stereo and the mix is more than adequate with wide atmospheric stereo panning and upfront dialogue that chills to the bones.

We only get additional Sentai Filmworks trailers on this release.

A moody, dark, and gripping set of horror stories from Japanese folklore and urban legend that is masterfully animated and acted, Yamishibai: Japanese Ghost Stories seasons 1 & 2 is presented on Blu-ray here from Sentai Filmworks in a pleasing if barebones set.