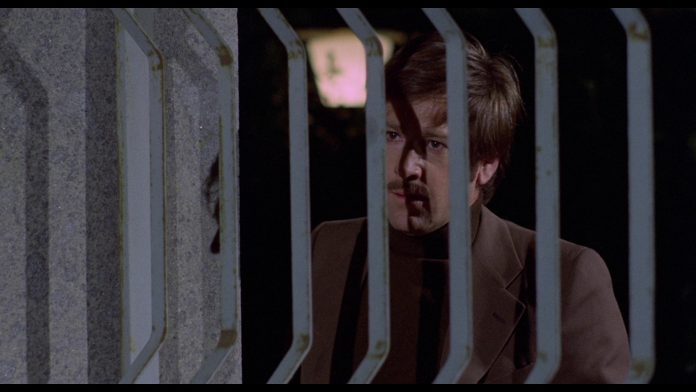 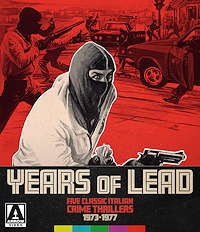 Years of Lead: Five Classic Crime Thrillers 1973-1977 brings together five Italian giallo or more precisely poliziotteschi films from the era of great criminal and political violence in Italy that gives the collection its name. This subgenre focuses on police corruption, crime, and in most cases some sort of elite, out of control criminal or group of criminals that it seems like the law cannot handle without an innovation or approach.

The first film, Savage Three (1975) follows three young, well-educated men who work together at a computer analysis firm. Outwardly, they are the kind of respectable young up and comers that no one would glance at, but they devolve into a brutal trio who launch a string of violent crimes during their late-night carousing.

In Like Rabid Dogs (1976) a group of three upper-class Roman friends, led by Tony, prey on, torture, and kill prostitutes.

In Colt 38: Special Squad (1976) a police detective forms a secret rogue crime fighting squad each armed with an unlicensed .38 Colt Diamondback revolver to go after the merciless Marseilles crime lord (Ivan Rassimov) who victimized his wife.

Highway Racer (1977) changes up the formula a bit mixing the crime thriller with a Steve McQueen-esque high octane racer. This one follows a young hot shot cop who drives a newly souped-up undercover car and has a penchant for getting into wild car chases through the streets. This one is a lot less dark than the other films in the collection and offers a good breath of air before heading into the fifth, earliest, and probably the best film in the collection, No, The Case is Happily Resolved.

In this 1973 film a railway worker witnesses a college professor brutally murder a woman in the bushes and when he notices the professor has seen him, he flees. Not trusting that the system will work in his favor, he doesn’t report the crime right away, but the professor turns the tables and fingers the railway worker as the suspect in the crime. The film flips the script on the poliziotteschi genre again by using a dogged veteran reporter to sniff out the facts in the case rather than the inept police.

These films are each gritty, low budget, but crafty in their cinematographic storytelling. For fans of the films of Lucio Fulci, probably one of the most famous of the giallo directors, this collection is a great way to go further into the genre.

All five films in the collection are presented with the original Italian mono mixes, while Colt 38: Special Squad also as an English mono dub. Oddly, Savage Three and Like Rabid Dogs have DTS-HD Master Audio 1.0 while the rest of the films have LPCM 1.0, which I found strange, but it really doesn’t shift the quality of the audio much. The sound for all the films are somewhat limited in their range, a little boxy sounding, and louder sounds and music sounds slightly harsh or clipped, but dialogue does sound clean enough.

No, the Case is Happily Resolved

An excellent collection of these gritty crime dramas look great, provide hours of entertainment, and as always with Arrow, a good bit of bonus features.