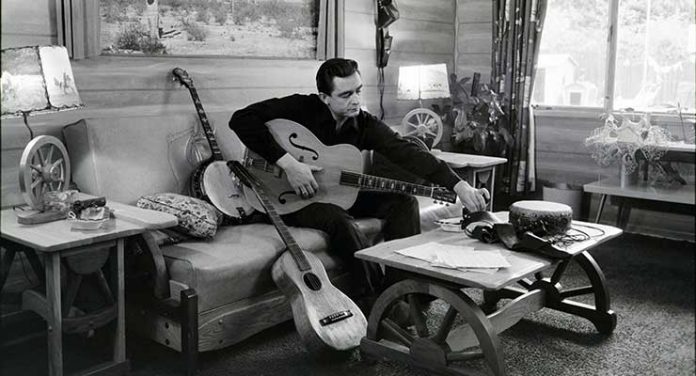 The latest PBS documentary film series from Ken Burns is Ken Burns’ Country Music. Given how influential and ubiquitous country music is in American popular culture, influencing everything and everyone from Bob Dylan and The Byrds to British acts like the Rolling Stones, or even crossover hip-hop acts like Lil Nas X, it seems strange that Ken Burns has taken this long  to address the genre in one of his epic documentary film series. Burns has heretofore covered jazz, the American Civil War, World War II, The Great Depression indirectly in his film The Dust Bowl, even baseball and the Roosevelts among other grand American subjects. Now, the documentarian finally turns his attention to this musical genre, and it is decidedly not disappointing.

In his usual style of interweaving archival footage with filmed, slow pans across old photographs, interview segments with experts and, in the case of this series, musical icons, as one of Burns’ favorite collaborators, actor Peter Coyote, provides his running voice over in an absorbing, storytelling fashion, Ken Burns’ Country Music unfolds the narrative of this musical style over the course of eight roughly 115 minute episodes. They break down as, Episode One – The Rub (Beginnings to 1933); Episode Two – Hard Times (1933-1945); Episode Three – The Hillbilly Shakespeare (1945-1953); Episode Four – I Can’t Stop Loving You (1953-1963); Episode Five – The Sons and Daughters of America (1966-1968); Episode Six – Will The Circle Be Unbroken? (1968-1972); Episode Seven – Are You Sure Hank Done It This Way? (1973-1983); Episode Eight – Don’t Get Above Your Raisin’ (1984-1986).

Burns gets into the minutiae of the music, its origins, the progression of styles, and the personal demons that the musicians who pushed the format forward wrestled with. A lot of people only moderately familiar with country may be surprised to find out from Ken Burns’ Country Music that the musicians generally regarded as the founders of the three main branches of  country, Bill Monroe, Hank Williams, and AP Carter, were all taught and influenced heavily by black musicians, just as an example of the level of detail on the origins and stories that Burns gets into here.

The series hones in on the personal stories of the many musicians who created what was once derisively labeled “hillbilly music” and is now generally known as country music – from the Carter Family, Jimmie Rodgers, Bill Monroe and Bob Wills, to Hank Williams, Patsy Cline, Johnny Cash, Merle Haggard, Loretta Lynn, Charley Pride, Willie Nelson, Dolly Parton, Emmylou Harris, Garth Brooks and more. The interviews with those artists still alive are some of the most fertile grounds of information, but this is a generally well researched and interesting series, even if it seems to lack the overriding gravitas that Burns’ earlier musical documentary Jazz seemed to have. There’s a bit of a lighter tone to this one, but that isn’t to say this isn’t serious or well informed.

Ken Burns’ Country Music is a riveting look at not only a musical genre, but at America and Americana in its broadest sense, as is usual with Burns and his brand of documentary filmmaking. He has been telling the American story – the good, the bad, the ugly, and everything in-between – for decades and this one is no different. An amazing series for fans of country, music, or history in general.

Ken Burns’ Country Music premieres on PBS September 15, 2019 and is available on Blu-ray & DVD from PBS September 17, 2019. DVD and Blu-ray Feature Over 3 Hours of Extra Bonus Footage Not Airing During Broadcast