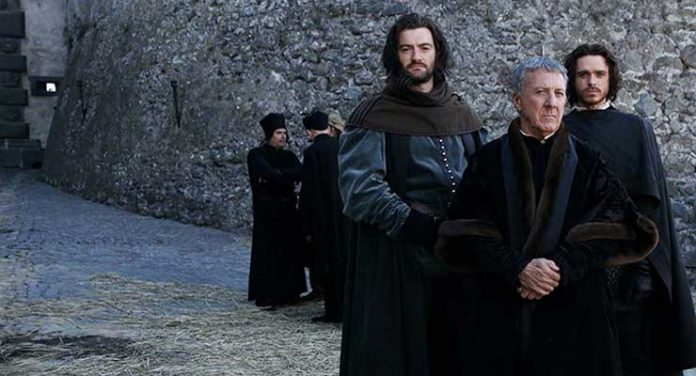 The legendary Medici family of Renaissance Italy were once among the wealthiest people in Europe, deriving much of their income from the textile business and later from one of the largest banks on the Continent founded by dynastic leader Giovanni di Bicce de’ Medici (Dustin Hoffmann). As this 8-episode series opens, Giovanni has just died after eating poisoned grapes and his banking business passes to oldest son Cosimo (Richard Madden) who with his brother Lorenzo (Stuart Martin) suspect that their rival Rinaldo Albizzi (Lex Shrapnel) was involved in their father’s death.

In an era when news travels at the speed of a noble steed, the remaining seven episodes contain, among other things, numerous Medici backstories like their enabling Cardinal Cossa’s (Steven Waddington) ascent to the Papacy or brokering a marriage between the daughter Contessina (Annabel Scholey) of the impecunious banker Bardi (David Bradley) and Cosimo. As events continue to unfold, we watch the fortunes of Florence and its first families wax and wane. During a particularly harsh economic period, the artisan Filippo Brunelleschi (Alessandro Preziosi) convinces Cosimo that the dome of Florence’s great cathedral can be completed using novel architectural techniques and this project will create jobs and raise civic morale. As the work on the dome continues, the Black Death makes its ugly entrance and  claims Piccarda (Frances Barber), Giovanni’s widow and Cosimo’s mother.

Cosimo is arrested during a Signoria meeting and the Medici family regroup to set him free much in the manner of our current-day Sopranos with informants, payoffs, blackmail, and the usual suspects. However, Cosimo, his son Piero (Alessandro Sperduti) and daughter-in-law Lucrezia (Valentina Belle) are eventually exiled to Venice and there are questions about the future of the Medici family as his rift with Contessina widens. Trusted aide Marco Bello (Guido Caprino) keeps the now-distant Cosimo in the loop about current events in Florence. 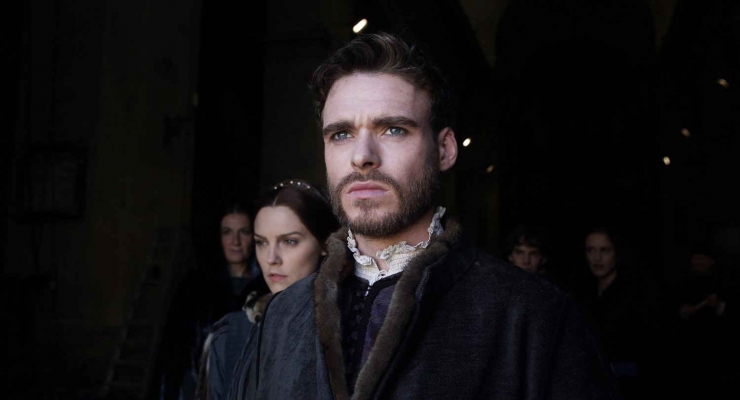 With Cosimo out of the way, the Albizzis take over Florence. Venetian Doge Foscari (James Murray) fails to get Cosimo’s exile lifted and the lonely Medici leader falls under the spell of the comely servant Maddalena (Sarah Felberbaum). Contessina runs into Ezio Contarini (David Sturzaker), her former fiancé, and although tempted, she remains faithful to her husband. As this historical drama unfolds, viewers are treated to additional court intrigue at the Signoria with new enemies for the Medicis at every turn, the sheltering of an exiled Pope Eugenius IV (Richard Bamber), a showdown between Rinaldo and Cosimo, and the revelation of some very dark Medici family secrets long-held by family advisor Ugo Bencini (Ken Bones).

The seemingly ubiquitous show creator Frank Spotnitz has aimed for visual and dramatic impact rather than strict historical accuracy. As Spotnitz relates: “the season will be more thriller than historical saga . . .” and some of the liberties taken with the “facts” are intended to contribute to the series’ dramatic tension. Director Sergio Mimica-Gezzan gives this historical drama the proper balance between deliberate pacing and exhilarating moments of sheer excitement, with all the action well supported by Paolo Buonvino’s powerful score. The cinematography by Vittorio Omodei Zorini often verges on the spectacular as his camera crew delivers both sweeping vistas of the Italian countryside and its ancient cities while there are plenty of intimate moments and frequent sex scenes, often on a moment’s notice. As a result, viewers are literally transported to another time and place that is the absolutely engrossing era called the Renaissance. The cast with the exception of screen veteran Dustin Hoffmann was unfamiliar to me but from top to bottom, we get an ensemble of tremendous talent and one that creates authentic period characters. Those who relished Showtime’s three-season run of the historical drama of The Borgias will find even more to enjoy in Medici: Masters of Florence. Medici-maniacs will be delighted to learn that this series has been renewed for Season 2 that will air sometime next year.

Medici: Masters of Florence is now available for viewing on Netflix.