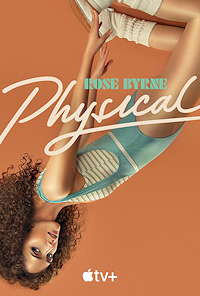 In Physical, Sheila Rubin (Rose Byrne) is an unhappy San Diego housewife in a mundane and monotonous life. Her only escape is aerobics. While watching an aerobics class at the local mall she conceives the idea of creating and packaging a series of aerobics video cassettes to sell to the frenzied home video market for millions.

The issues that plague Sheila, and believe me there are many, is that she is married to man who doesn’t put her interests out in front like his own. Danny Rubin (Rory Scovel) is a newly fired college professor but seeks to come back into the limelight by running for local office when it is found out that a local developer wants to raise the beaches and erect more malls and miscellaneous properties.

Sheila also has a daughter and feels that she has to walk on eggshells all the time. Everyone in her life seems to go first before she does. Unfortunately, she manifests her issues into an eating disorder. It’s this variable that grounds Physical into something more than just passable entertainment. Physical is a smart show that is equal parts hilarious, with scathing social satire wrapped up in a nostalgic 1980’s bow. Oh, and the soundtrack is awesome. The production design is also top notch. They’ve nailed the visual aesthetic with the hair, make-up and costumes.

Watching the trailers early on when the show was being initially promoted, I could not wait for its eventual arrival, and I was not disappointed. Watching Physical in Dolby Atmos is a sonic trip. It was announced this past week that the series had been renewed for a second season, so there will be more Sheila hijinks to ensue.

Rose Byrne shines bright playing and equally strong vulnerable woman who feels the walls of life closing in. Viewers should also take note about the disclaimers at the beginning of certain episodes that focus on Sheila’s eating disorder — should they also need someone to talk to.

I’ve watched some of these episodes multiple times, because it’s just that good. I would not be surprised if Rose Byrne gets nominated for an Emmy at some point. With all ten episodes of the first season now released on Apple TV+, folks will have the option to binge the series. It really is that good and one of my favorite new television shows of 2021. Let’s get Physical, indeed!

Physical: Season One is now streaming in its entirety on Apple TV+