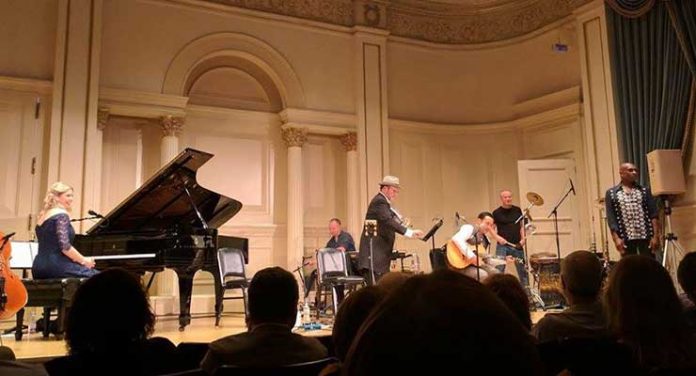 September 28, 2018. FLOW or Fiona Joy Hawkins (piano), Lawrence Blatt (guitar), Jeff Oster (trumpet, flugelhorn, sound effects), and Will Ackerman (guitar) has become one of the most highly regarded “New Age” quartets currently on the circuit. All of these artists have established major performing and recording careers: Fiona Joy in her native Australia and Lawrence, Jeff, and Will in the US. Grammy-winner Ackerman, the “senior” member of this foursome, opened the door for the commercial success of New Age compositions and performers with his founding of the music label Windham Hill Records in 1972. This new millennium “fab four,” frequently adds talented sidemen to their ensemble when they record and tour. For this concert, FLOW wisely chose Tom Eaton, a true musical factotum who contributed on bass and piano, Premik (Russell Tubbs) a legendary multi-instrumentalist, Vin Downes a brilliant young guitarist, and veteran percussionist Jeff Haynes.

The concert held at the Weill Recital Hall, Carnegie Hall’s more intimate venue, featured a playlist consisting of original compositions by each of the group’s members and included selections from their eponymous award-winning first album:

With life-cycle themes including raising children, getting married, celebrating anniversaries, and dealing with death, as well as numerous references to the world of nature, FLOW managed to weave a wondrous tapestry of conventional and unconventional music supported by a wide range of sound effects. It can be a challenge to blend such widely varyng acoustic instruments, but, in the spirit of true collegiality, the ensemble managed to make brass, winds, guitars and piano sound like they were always meant to play together. Each of the principals, a virtuoso in his or her right, provided the audience with solos that took on lives of their own but unerringly returned home and reunited with the rest of the band. Highlights abounded in this two-hour program including Will Ackerman’s touching wedding piece “Unconditional,” Vin and Jeff’s call-and-response in “Hawk Circle,” Fiona’s engaging opening solo, and the group’s signature piece “Flow.”

Before departing the stage, FLOW rewarded its enthusiastic fans with an extended encore, “Last Day at the Beach” kicked off by Will and Vin, later joined by the rest of the group, that literally brought down the house. Although this concert is the final stop on FLOW’s fall tour, those who want to get more of this super-talented ensemble will be glad to know that a second album is in the works for next year.

More information about FLOW is available on their website www.flowthegroup.com.