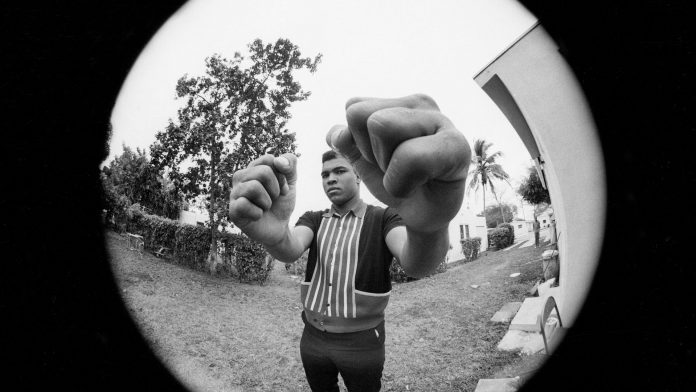 Ken Burns, Sarah Burns and David McMahon have created an expansive documentary series about the greatest boxer of all time who ultimately transcended the sport that made him famous. Each of the four episodes or “rounds” covers a specific period in Muhammad Ali’s life: Round One: The Greatest (1942-1964); Round Two: What’s My Name? (1964-1970); Round Three: The Rivalry (1970-1974); Round Four: The Spell Remains (1974-2016).  Emmy-winner Keith David serves as the series narrator.

Cassius Marcellus Clay, Jr. was born in Louisville, Kentucky and became a successful amateur boxer, winning the light heavyweight gold medal at the 1960 Olympic Games. Sponsored by a consortium of Louisville businessmen, Clay turns pro and goes on to defeat Sonny Liston for the heavyweight crown in one of the biggest upsets in boxing history.

Clay joins Elijah Muhammad’s Nation of Islam, a move that displeases many boxing fans, and become Muhammad Ali. After a short-lived marriage to a model, Sonji Roi, Ali defeats Liston in a rematch, and next begins the lengthy saga of his continued refusal to be inducted into the Army. Ali marries Belinda Boyd, a 16-year-old NOI member, and the couple struggles financially as he has been stripped of his heavyweight title and boxing license. The United States Supreme Court finally hears Ali’s case, and overturns his draft evasion.

The centerpiece of this documentary is the Muhammad Ali-Joe Frazier fight trilogy that began with a 1970 bout with the largest purse in boxing history as both men entered it undefeated.  Frazier wins a unanimous decision but was never the same fighter after taking a brutal beating in the ring. George Foreman whips Frazier in a title fight, setting up the Foreman-Ali “Rumble in the Jungle” in Kinshasa, Zaire. Ali knocks out Foreman and regains his title,then moves back to Chicago and makes Veronica Porché his third wife.

Although Ali wins the other two Frazier fights, ending with the “Thrilla in Manila,” his boxing career gradually declines, ending in an ignominious defeat at the hands of Jamaican boxer Trevor Berbick in 1980. Ali retires from the ring and begins to exhibit signs of pugilistic Parkinsonism from his having absorbed too many blows to the head. In 1986, Ali marries Yolanda “Lonnie” Williams who becomes his caretaker as his health deteriorates.  In the years prior to his death in 2016, Muhammad Ali receives numerous accolades, including the Presidential Medal of Freedom, and was widely recognized as a philanthropist and humanitarian.

Documentarian Ken Burns and his crew have struck gold again with this meticulously curated collection of film segments and spot-on contributions from writers like Walter Mosely, Jonathan Eig, Robert Lipsyte, Jerry Izenberg, and Salim Muwakkil. There are personal reminiscences from two of Ali’s daughters and ex-wives Belinda and Veronica as well as brief appearances by pro sport luminaries like Kareem Abdul-Jabbar and former heavyweight champion, Larry Holmes. Cinematographer Buddy Squires has collaborated with Burns on several of his previous documentaries and with a team of four film editors gives viewers a thrilling overview of Muhammad Ali’s extraordinary life and times. This was also a life that spanned a turbulent era in American history marked by the civil rights movement, daily anti-war demonstrations, and the emergence of strong Black leaders like Malcolm X and Martin Luther King, Jr.

Running for more than seven hours, Muhammad Ali reveals a multidimensional portrait of a complex man whose public displays of bravado concealed the private insecurity stemming from being vaulted into international stardom before he was prepared to accept its consequences. His life was marked by numerous contradictions. Ali was truly devoted to his religion, yet was a notorious womanizer and while he loved his children, he spent considerable amounts of time away from them during his boxing career.  For fight fans like myself, there are plenty of clips from Ali’s fights that effectively portray his amazing skills in the ring and the basic brutality of a sport that famed writer A.J. Liebling once termed “the sweet science.” Whether or not you were a fan of this controversial sports icon or simply piqued by his blatant self-promotion, Muhammad Ali is a compelling documentary that will demand your attention. Highly recommended.