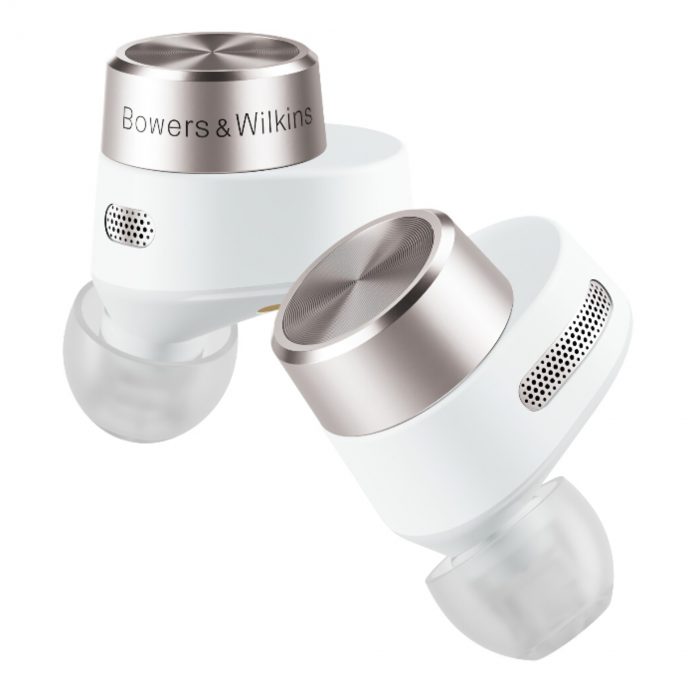 Bowers & Wilkins, well-known for its excellent loudspeakers, has made a very successful entry into the world of portable audio devices with some highly regarded wired and wireless headphones like the P5 and P7 which I have previously reviewed. This past April, B&W launched two pairs of what they term wireless headphones, the P17 and P15, powered earbuds that fit snugly into each ear canal. The PI5 is the subject of this review.

The PI5 enables wireless music playback streamed from Bluetooth-compatible sources including mobile phones, tablets or and computers. It can also switch over to receive phone calls. The PI5 features Active Noise Cancellation (versus the PI7’s Adaptive Noise Cancellation), Ambient Pass-Through and Wear Sensing Technology. Ambient Pass-Through allows conversations to be heard without having to remove the earbuds.Wear Sensing Technology enables pausing and resumption of music if either earbud is removed and then replaced. Further customization of settings can be performed through the Bowers & Wilkins smart phone App for iOS and Android devices. The App can also initiate voice assistant support via Siri or Google Assistant and offers a selection of several natural sound environments for listeners who just want to lean back and relax. A Smartcase wireless charges the P15, offering up to 20 hours of streaming with noise cancellation enabled and up to two hours playing time on a 15-minute charge. The Smartcase also enables Bluetooth connections with source devices that can be switched back and forth.

Set up and getting started

The P15’s compact carton contains the Smartcase, both earbuds (available in black or white housings) with a selection of tips ranging from small to large and a USB-C charging cable. Power management is automatic as the Smartcase will start charging the earpieces after they are placed in their designated holders. Once removed from the Smartcase, if the PI5 is not used for five minutes, it will go into stand-by mode. If the PI5 earpieces are replaced in your ears or connected to a Bluetooth device, the power will restart. Each earpiece has a function button on its top that can switch between a music source or a mobile phone. Three taps on either earpiece will pause/play, go to next track or previous track. Incoming calls can be managed with a single tap to answer, two taps to end, and two more taps to decline (one of my favorite features). Adaptive Noise Cancelling involves tapping the left button for one second with additional one second presses to go through the modes of On, Auto, or Off. Voice assistance via Siri or Google Assistant is accessed by pressing the right button for one second. Ambient Pass Through requires a connection to the Bowers & Wilkins App to select High, Low or Off. The Wear Sensor (that can be disabled through the App) allows removal of one earpiece to stop the music with a return to listening when it is replaced.

Finally, there is a flashing light on the outside of the Smartcase that indicates battery charging and pairing status.  Pressing a small button on the inside of the charging case between the two earpieces will start the blue light flashing until pairing is complete. This process can also be accomplished through the “Tap to Connect” on the Bowers & Wilkins App which will recognize up to four previously paired devices.  Google Fast Pairing can be done through an Android device equipped with this feature and a free app from the Google Play Store. The apps will notify when software updates are available. Factory resets will restore default settings and clear all previously connected devices while hard resets (which should rarely be needed unless there is a system crash) can be achieved by pushing the charging case button for 15 seconds.

Giving my ears the PI5 treatment

The reason for going into such detail on the functionality of the PI5 is that these are the most sophisticated earbuds that I have yet encountered, and listeners would be advised to download the manual from the company website as the small print out that accompanies the PI5 is hard to read. Before critical listening began on my iPhone Xs, I set Active Noise Reduction, Ambient Pass-Through, and Wear Sensors to off position. Starting with Diana Krall’s This Dream of You, I was immediately struck by the capture of background detail in the recording and Diana’s vocal warmth. This was immediately followed by DK’s rendition of Temptation with its focus on acoustic bass and percussion. Here the same virtues of detail retrieval were evident, but obvious ground was yielded to the lower bass octaves. Inutil Paisagem features two female voices over an acoustic bass and the distinction between the two women was well maintained and the bass notes were quite clear if not particularly potent. After hours of listening over several weeks, I concluded with Ann Savoy & Her Sleepless Knights, a 21st-century Dixieland group, performing The Very Thought of You. The individual instrumental voices were clear as a bell and when Ann’s sultry voice entered the scene, it made me wish that this old chestnut of a song would never end.

It also takes your calls

Of course, prospective PI5 owners will want to know how well it does with voice reproduction compared to the standard iPhone speakers.  I was prepared to hear little if any differences but boy was I ever wrong! When my wife Anne called me from our house phone the hash-ridden voice quality that I have come to expect with my iPhone Xs was no match for how her voice rendered through the PI5 earbuds.  I am now a true believer. I am not a big user of the Siri assistant, but I did try it out to make sure that it worked. It did.

The Bowers & Wilkins PI5 True Wireless Headphones are the first earbuds that I could comfortably wear—they have three different sized earpieces—and use daily for important phone conversations or for simply enjoying music. The PI5 at $249.00 is not cheap but everything about them from the earpieces themselves to the carrying/charging case exudes high quality workmanship. Highly recommended.