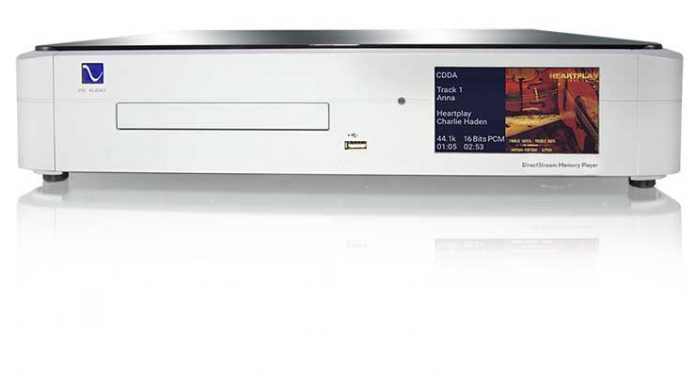 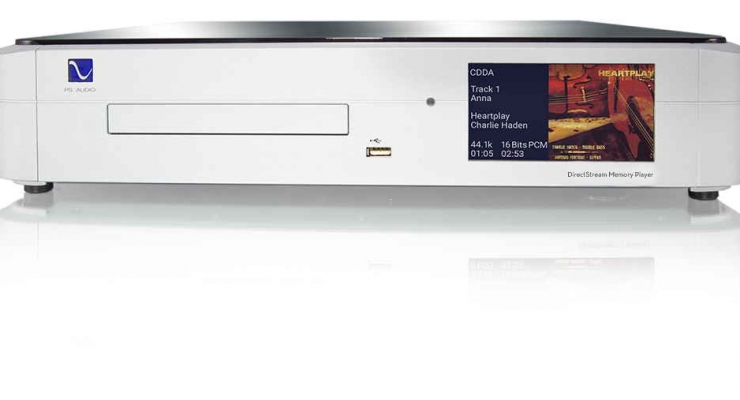 For the past few years,  my reference playback system included PS Audio’s innovative  PerfectWave Transport CD/DVD Disc Player and a PerfectWave DAC Mk II. Last year when I added the PS Audio DirectStream DAC, capable of handling the DSD format, I longed for a companion PS Audio disc player that could handle my SACDs. PS Audio’s “chef” Paul McGowan and his boys in the Boulder, Colorado kitchen heard me and cooked up their latest dish, the DirectStream Memory Player or DMP. [Note: There is a major update now available  for the DirectStream DAC, called Huron, that removes 3db of audible noise and 18db of infrasonic noise while increasing upsampling from 10 times DSD to 20 times DSD].

Out Of The Box

The DMP has an advanced version of PS Audio’s proprietary Digital Lens that addresses timing, noise and isolation problems through a combination of buffer memory and FPGA (Field Programmable Gate Array) digital processing.  The latter technology is also found in the DirectStream DAC that receives its digital data and upsamples it to ten times the standard DSD rate of 2.8MHz  and, after processing, all input data is converted to double DSD (5.6 MHz).

The digital wizardry begins when a silver disc is inserted into the drawer and the DMP reads its contents into buffer memory, isolating data from any mechanical anomalies of a physical disc drive and laser optical mechanism. This process is rapid but does cause a slight delay in starting the audio signal. The DMP can play virtually all current disc formats including Pure Audio Blu-rays and most commonly used encoding formats on discs or thumb drives  (see Specifications).

The clean front panel has a power button (for entering and leaving standby), a disc drawer, and a very legible blue screen with large font white lettering, a real blessing for seniors like myself, that also displays cover art. What distinguishes this player’s façade from its PS Audio predecessor is a USB port that switches the DMP’s file-reading mode. The rear panel is neatly styled in typical PS Audio fashion.  From left to right, there are a power switch, a power cord receptacle, a fuse holder, ports for an SD card and Ethernet connection, and a bank of outputs (XLR, coaxial, and HDMI) that allow for multichannel SACD playback if two additional DACs are available. PS Audio recommends the HDMI connection for the I²S digital data transfer mode that I used it for critical listening. Another plus for the DMP is its relatively hefty aluminum-faced and backlit remote control unit. This addressed my lone gripe with the DirectStream DAC that came with a cheap-feeling plastic remote unbefitting its $6K price tag. While the new remote is busier (it also has controls for a preamplifier and phono stage), it manages all the functions on the DMP and the DirectStream DAC.

The DMP is a literal plug-and-play component. The initial screen shows the player’s basic information including firmware version (upgradable in the future). A second screen addresses SACD playback mode and cover art preferences. After the DMP is registered on the PS Audio website it is possible to compile a playlist containing all the tracks played, to display associated cover art or to add cover art (if available) and edit disc metadata while the DMP is connected to the Internet.

[Note: Since this review was originally posted, the folks at PS Audio informed me that the “Pure Audio” function needs to be enabled. Pure Audio turns off all video elements of the Oppo drive and board and is commonly used for playback of audio-only Blu-ray discs. It is a four-step process: (1) Put a disc in the drive and touch the right upper corner of the screen; (2) On the next screen, touch the right upper corner again; (3) On the next screen, touch the blank right lower corner: (4) A new screen will open and “Pure Audio” can toggled on and off.  You will want to keep it enabled as the sound is noticeably improved.]

What Won’t It Play?

Like the proverbial kid in the candy store, I raced to my SACD library. One of the very first SACDs that I ever bought was Mark Levinson’s sampler, Red Rose Music, recorded and mastered in DSD. Duke Ellington’s In a Sentimental Mood locates Chico Freeman’s  saxophone and George Cable’s 9-foot August Förster concert grand piano front and center in your room. I heard pauses, keyboard clicks, and intakes of breath that were barely audible on the dozens of times that I had previously played this cut. Patricia Barber’s MoFi SACD of Modern Cool and its demonstration-quality track “Constantinople” finds Mark Walker’s persistent percussion varying with the intensity of his attack,  uncannily reproduced by the DMP.  Sonny Boy Williamson’s Keep it to Ourselves, an Analogue Production’s classic, has been remastered in the DSD format as well. Okay, it was a remaster of a remaster of a 1963 analogue recording. On “Don’t Let Your Right Hand Know,” besides  Sonny Boy’s mesmerizing mouth harp, there is the perfect capture of SB’s intermittent foot stamping and finger snapping that vary in intensity and location.

Selecting a different format, a Reference Recording DVD-R (WAV 176kHz/24bit) has Eiji Oue leading the Minnesota Orchestra in an all-Stravinsky program that includes The Firebird Suite with its room-rattling bass slam at about the 9-minute mark. What got my attention this time around was the articulation of the very quiet low frequency opening that, on less resolving players, simply fails to show up.

Moving on to Red Book CDs, I began with a classic 1956 Verve mono recording of Ella Fitzgerald and Louis Armstrong, simply titled Ella and Louis. Of course, this is not just any old 44.1kHz/16bit CD, but a First Impressions Music remaster from the original sources at 192kHz/32bit resolution or so-called “Ultra-HD.” This 60-year chestnut has never sounded better approaching the fabulous voice quality of both soloists on display in my cherished LP version. A JVC XRCD of a legendary vocal/piano recital, The Tony Bennett Bill Evans Album, followed and from the first cut, “Young and Foolish,” I was swept away by how natural the decay of Tony’s voice sounded while detecting a previously unnoticed slight studio echo. A more “recent” disc, vintage 1993, Holly Cole Trio’s Don’t Smoke in Bed is one of those recordings where voice meets piano and bass and the rest is simply sublime. There is a moment in “So and So” that I used to think had some sexually explicit lyrics punctuated by Holly’s finger snaps but with every word now so perfectly articulated, the song’s rating goes from “R” to barely “PG.”

Files ranging from CD-quality FLAC to DSD were sampled through the USB port. Norwegian songstress Radka Toneff was a brief candle who made very few recordings. Listening to “The Moon is a Harsh Mistress,” with the sensitive accompaniment of pianist Steve Dobrogosz, a plain vanilla 44.1kHz/16bit FLAC file, I heard background piano pedaling that had been glossed over in my earlier encounters with this cut. Many, many files later, I wrapped up the USB sessions with a DSD track of singer/pianist Jeremy Monteiro’s title track from his Karen Carpenter tribute album, A Song for You Karen. It usually takes more than a stiff breeze to blow me away, but after hearing this track in native DSD for the first time, I was not just blown away but utterly gobsmacked. Jeremy’s ethereal voice floated out there supported by all of his piano’s harmonics. A bit of advice for using the USB option: the thumb drives should have a limited number of files or folders since the scrolling function must be accessed from the touch screen and moves at a very deliberate pace.

My final impressions of the PS Audio DirectStream Memory Player, once past the recommended 50-hour break-in time, resulted from its superb PRaT (Pace, Rhythm and Timing) with an emphasis on the “T.” Properly managed timing gives live music its realism as the sound wavefront reaches your eardrums. This is the real magic that the DMP, mated to its complementary DirectStream DAC, delivers and likely explains the recovery of the previously “hidden” details in some of my most familiar recordings.  Beyond simply recovering sonic details, the DMP/DirectStream DAC combination reproduced music from well-recorded digital sources of varying levels of resolution that closely emulated the experience of the live performances themselves.

Unequivocally, this digital player/transport is as good as the very best that I have heard, cost notwithstanding, when paired with PS Audio’s DirectStream DAC. The PS Audio pair’s asking price of $12K gets you very close to the summit of audio’s K2. Highest recommendation.