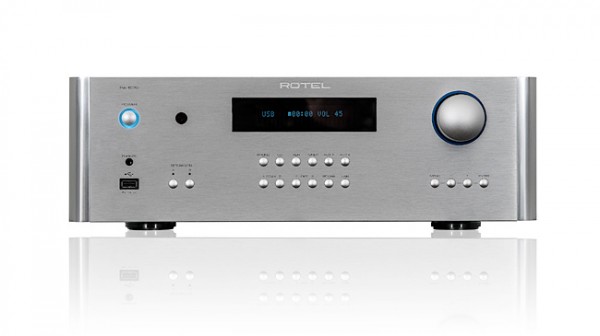 Integrated amplifiers have always attracted audio enthusiasts who seek the benefits of separate preamplifiers and amplifiers but who are constrained by space or budget. Rotel, a multinational audio corporation, designs many of its products in England and Asia, but manufactures them in their very own factory in China, using premium parts and very high quality control standards. The RA-1570 stereo integrated amplifier has now arrived on our shores with an entirely new design, a lot of cool features, and quite reasonably priced. 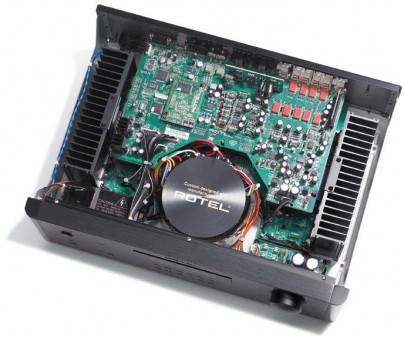 An Integrated Amplifier…And Then Some

This solidly built integrated (tipping the scales at 13 kg) sports a smart silver (black is also available) chassis with plenty of heat vents and a super clean front panel. From left to right is an illuminated power button, an infrared “eye,” a headphone jack, a USB port for i-devices or a Bluetooth dongle (supplied), and buttons to select one or two pairs of loudspeakers. Further right, there is a highly readable VFD display for source, mode, volume, and menu options. Below is a bank of source selector buttons. Finally, there is an oversized volume control above the menu controls.

The rear panel is also neatly laid out with an electrical ground for phono, five analog inputs (labeled “Phono,” “CD,” “Tuner,” “Aux 1” and “Aux 2”). Continuing starboard, there are RCA jacks allowing the RA-1570 to function as a preamp for a second outboard amplifier, a pair of balanced inputs, five digital inputs (two coaxial, two optical and one USB port) and an RS-232 serial port for serial control and software updates rounds out the inputs. At the bottom of the rear panel are right and left “Pre-Out/Main In” jacks for an external signal processor, terminals for two sets of speakers, and inputs for Rotel linked devices, an external remote, two 12 volt triggers, and a power cord receptacle. 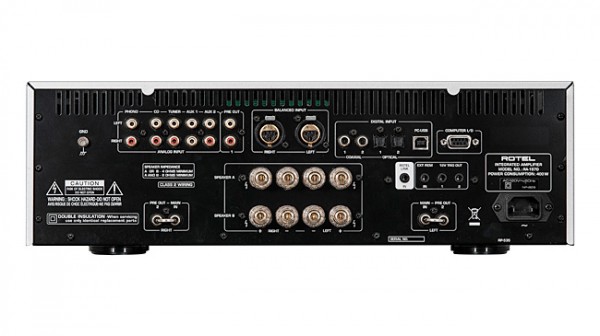 The remote control unit is reasonably uncluttered, but less dexterous users should note its small buttons. There are separate on/off buttons, mute and volume commands (volume changes from side-to-side rather than up-and-down), a central menu pad and screen dimmer. Below, numeric and playback buttons are intended for Rotel tuners and CD players, and an “RND” (Rotel linked devices), speaker selectors, and input selectors that mirror the front panel. The multi-language manual is well illustrated but quite basic; its very simplicity assumes some familiarity with the set up of audio components.  In this instance, screen shots of the various menu functions would have been welcome, particularly for novice users.

Amplifier power output, a major factor for many buyers, is an ample 120 watts, both channels driven at maximum volume (8 Ω impedance).  Unless you listen at ear-bleed levels or have a sound room like the Grand Canyon, this will be more than sufficient power for most speakers.   Extensive listening to my Totem Mani-2 Signatures (a relatively inefficient 85 dB two-way design), often at higher than usual volume for my ears, never found this unit running out of gas.

The Rotel RA-1570 has more features than any integrated amp that I have ever used. One of these is a phono stage, a luxury item in a mid-priced integrated amp, with a sensitivity of 2.2 mV, suitable only for moving magnet cartridges (no longer having such a cartridge, I could not evaluate this feature).

Going the analog input route, I hooked up my Oppo BDP-105 universal player and Bryston BDA-1 DAC with its matching BDP-1 digital player. For comparative purposes, I also tapped the Oppo and Bryston players into the coaxial inputs that feed a Wolfson WM8740 stereo DAC with playback of resolutions up to 192kHz/24-bit. Those familiar with DACs will know that Wolfson chips are among the very best out there.

Of course, there is much more. Digital files whether on computers, thumb drives or streamed wirelessly have become very popular choices for music playback. While the RA-1570 lacks WiFi or Ethernet connections (its only drawback, in my opinion), a Bluetooth option will allow playback from WAV, MP3, and WMA files with resolutions up to 48kHz/16-bit from an iPhone or iPad. 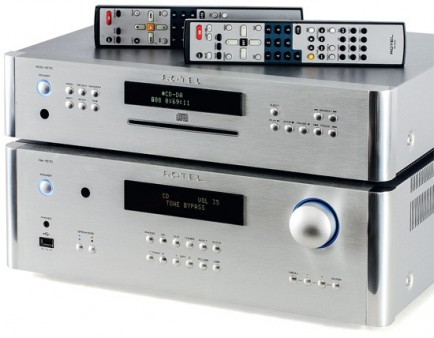 Taking the Rotel for a Ride

Hopefully, I have whetted your audio curiosity, so here begins my Rotel RA-1570 experience. I started with its Bluetooth performance, since my previous experience with Bluetooth audio has varied in sound performance and connection stability.  Getting my iPhone and iPad paired with the BT receiver took a little fiddling but once the devices were discovered, playback, if not at the sound quality of the other digital sources (after all MP3 is MP3) was at least listenable and, most importantly, rock steady. You could also directly connect your i-devices through the USB port but how much fun would that be?

The sound improved substantially when I moved to CD/SACDs on my Oppo player. This was my first opportunity to compare the Oppo’s ESS SABRE32 Reference Audio DAC (there are dual ES9018 DAC chip with one dedicated to stereo output) to the Rotel’s DAC. As I listened to old blues man Sonny Boy Williamson blow and belt “Keep It To Ourselves,” (Analogue Productions CD), consistent differences between the two DACs were often difficult to discern. Moving to more demanding fare, in this case, Eiji Oue and the Minnesota Orchestra taking on Stravinsky’s “Rite of Spring” on a Reference Recording HRx DVD-R Eiji Oue/Minnesota Orchestra Play Stravinksy (176.4kHz/24-bit), matters became a bit easier to discern. This is a musically weighty piece with lots of air and low-frequency information that more convincing directly through the Oppo than through the Rotel’s DAC.

Switching to the Bryston BDP-1 digital player, first through its matching BDA-1 DAC then through the Rotel coaxial input, I went to another hi-res favorite, Christy Baron’s sultry cover of Peter Gabriel’s “ Mercy Street,” a 96kHz/24-bit track from Retrospective (Chesky Records). Unlike the Oppo/Rotel comparison, the differences between the DACs were more subtle (the Bryston uses a pair of Crystal 192 kHz/24-bit DACs) and it had more to do with the size of the soundstage (slightly wider and deeper with BDA-1). This difference in soundstage dimensionality was more apparent when I listened to another Reference Recording’s 88.2 kHz/24-bit download, the magnificent performance of “A Young Person’s Guide to the Orchestra” by Michael Stern and his Kansas City Symphony Orchestra (Britten’s Orchestra).

Going through the final paces, I connected my trusty MacBook Air to the USB asynchronous port on the Rotel’s rear panel. Using the Audirvana Plus player, capable of all the available resolutions that the Rotel DAC can handle, I was treated to Jimmy Lee Robinson’s natural sounding rendition of “What A Wonderful World” from his All My Life  (176.4kHz/24-bit download, APO Records) complete with acoustic guitar and whistling. Among the many other hi-res files sampled was one of my all-time favorites, Joel Fan’s superb performance of the Ginastera Piano Sonata (yes, another 176.4kHz/24-bit Reference Recording, West of the Sun). This piece rigorously tests a component’s ability to convey the huge dynamics of a well-recorded solo piano. The Rotel did not disappoint here, demonstrating the great strides that have been made in the playback of high-resolution digital files through a USB 2.0 port.

My reference integrated amplifier, the Pass Labs INT-30A, only puts out 30 watts per channel, but those are Class A watts and enough to drive adequately all of my home speakers (including some Martin Logan ESLs). However, the Pass integrated does not have a DAC and thus lacks the versatility of the Rotel RA-1570. I would never give up the Pass’s glorious Class A sound, but its list price ($7150) might put it out of reach for some buyers. With respect to value received, the RA-1570 integrated stereo amplifier is a wise choice for cost-conscious listeners who want a lot of audio options, great build quality, excellent sound, and ease of operation. A highly recommended component that could serve either as a starter or as a replacement for one that lacks the digital playback features that many audio buffs now consider to be essential.