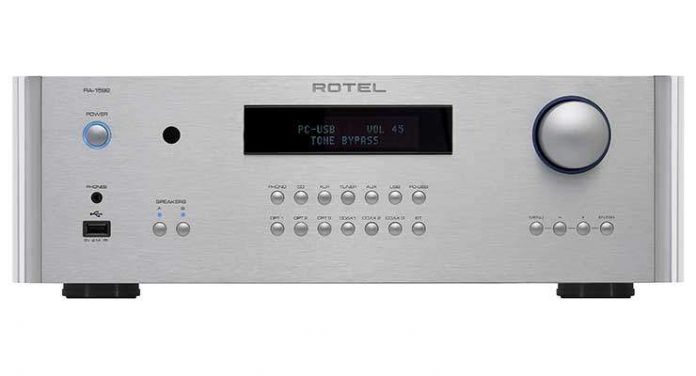 Any time a sturdy shipping carton arrives on my doorstep with Rotel stamped on it, I anticipate a reasonably priced, great performing component. The last Rotel stereo integrated amplifier that graced my sound room was the  highly regarded RA-1570. But that was more than two years ago so now Rotel introduces its new top of the line integrated amp,  RA-1592.

A chip off the old block?

The façade sports a comforting family resemblance to the RA-1570. The left side of the silver (also available in black) front panel has an illuminated power button, an IR “eye,” a headphone jack, a USB port for i-devices and buttons to select one or two pairs of loudspeakers. In the center is a large VFD display for source, mode, volume, and menu options; below is a bank of source selector buttons. On the right side, there is an oversized volume control perched above menu controls. In the set up mode, master bass, treble, tone bypass, front panel dimming control and volume options (fixed or variable) can be set. These settings affect all inputs and cannot be set for each individual input separately, as per information we received directly from Rotel UK.

The left of the rear panel has a MM cartridge phono input, four analog inputs (labeled “Phono,” “CD,” “Tuner,” and “Aux,”) and two “Mono Sub” outputs. Moving right, there are pre-out RCA jacks that will allow the RA-1592 to function as a preamp for an outboard amplifier, an Ethernet input, a pair of balanced inputs, six digital inputs (three coaxial and three optical), one PC-USB input, two 12-volt triggers, inputs for Rotel linked devices, an external remote, and one RS-232 port. At the bottom of the rear panel are terminals for two sets of speakers, and a two-prong power cord receptacle. A Bluetooth antenna provides an APTX connection for CD-quality streaming from devices like i-Pads and iPhones. The PC-USB connector accepts all high-resolution formats including native DSD64 and DSD128 files. The RA-1592’s list of improved features continues with an onboard AKM premium 32-bit/768kHz DAC, the same unit used by the previously reviewed RC-1590 stereo preamplifier.

The RA-1592 uses the RR-AX150, a similar remote as that of the RC-1590 preamp. It features separate on/off buttons, mute and volume commands, speaker selection buttons, and buttons for tone controls, balance and screen dimming. Below are a numeric keypad and central menu functions and playback buttons intended for Rotel tuners and CD players and “RND” (for Rotel linked devices), and input selectors that mirror the front panel.
These buttons are for IR control of a CD player to enable Random and Repeat modes and are included in the RA-1592 just for convenience so no Rotel Link is needed. The owner’s manual is much more substantial than the one supplied for the RA-1570 and can be downloaded from the supplied CD-ROM. With a device as sophisticated as the RA-1592, it is worth taking the extra minutes to read the instructions before starting your party!

Integrating the RA-1592 into the system

The RA-1592 also improves over the RA-1570 with its heftier power plant that chunks out 200 watts per channel (as opposed to 120 wpc). You may not listen at earbleed levels or in huge barns but those added watts provide more headroom for large dynamic excursions such as found in those full orchestral passages. My Totem Mani-2 Signatures used in the review sessions are relatively inefficient (sensitivity: 85 dB @ 1m). They frequently appreciated this integrated amp’s additional power. I explored all of the RA-1592’s many features except for the phono stage since I no longer own any moving magnet cartridges.

Music sources issued from an Oppo BDP-105 universal player connected to the XLR inputs and ported into the coaxial SPDIF inputs to compare its DAC with that of the Rotel. I paired both my AK 240 portable digital player and iPhone6 via Bluetooth, and plugged my MacBook Air into the USB port to listen to DSD and other hi-res files. I did connect my iPhone 6 into the dedicated front panel USB input but this sacrifices the convenience of using the iPhone as a remote device since the Rotel RA-1592 remote does not operate any i-device.

I intentionally started my listening to the highest quality music sources as this is where I anticipated hearing the greatest sonic improvements over the RA-1570. So, starting at the top, I sent a bunch of hi-res files from my Mac’s 2.0 USB port to the RA-1592’s PC-USB port via the AudirvanaPlus music player set to its highest internal resolution and capable of DoP. Jeremy Montero’s intimate version of The Carpenters classic, “A Song For You,” is a nicely mastered DSD64 file with an incredibly realistic rendition of this singer’s soft, breathy voice and the supporting solo piano. It was as good as I have ever heard this track. Continuing with solo piano, I put on Fiona Joy’s gorgeous composition, “Ceremony” from her Signature-Solo album (DSD64). Again, the sonorities of the keys and sounding board put this most-difficult-to-capture instrument right into my listening space.

Moving to larger ensembles, Paul Simon’s 25th Anniversary Graceland (96kHz/24-bit FLAC) has always been a touchstone album for me. “Diamonds On The Soles of Her Shoes” has an infectious pulsing bass line and toe-tapping rhythm section that was clearly reproduced. I am a sucker for a capella music. Little Anthony and the Imperials, on the 25th Anniversary Rock and Roll Hall of Fame Concert, (48kHz/24-bit FLAC) poured out “Two People in the World.” Every voice was as clear as a bell and the flawless harmonies floated effortlessly in the background. In a major shift of musical gears, “The Firebird Suite” as realized by Eiji Oue and the Minnesota Orchestra (176.4kHz/24-bit WAV) has some of the greatest dynamic range of any piece in my library and its initial low volume gives way to some thunderous sounds at the 9:20 mark. I heard all of the brash brass and bass boom that this selection possesses.

Red Book CDs played directly through the Oppo player’s ESS SABRE32 DAC were compared with the digits ported directly to the Rotel’s AKM DAC. Previous sessions between the Rotel RA-1570 Wolfson DAC and the Oppo DAC, showed that the latter outpointed the former. Starting with Lise & Gertrud’s vibrant live CD version of “Eleanor Rigby,” a vocal duo plus ‘cello, I got a far different impression. As good as the Oppo’s DAC is, this time I consistently gave the nod to the Rotel RA-1592 for both openness and more natural acoustic. For higher resolution discs like Malcolm Arnold Overtures (176.4kHz/24-bit DVD-ROM) with the composer leading the London Symphony Orchestra, I got the same impression during DAC comparisons.

The RA-1592 retails for nearly a grand more than the RA-1570, but you get the heart and soul of two of Rotel’s awesome separates, the RC-1590 stereo preamplifier and the RB-1582 MkII stereo amplifier, in a space-saving single chassis. The RA-1592 improves significantly on its predecessor and, with nearly twice the power, it should drive even the most inefficient speakers. As a stereo component that can do it all, the RA-1592 is an outstanding control center and amplifier for the present and the future.

Rotel RA-1592 Stereo Integrated Amplifier (TheaterByte Gear Review)
4.5 / 5 Reviewer
{{ reviewsOverall }} / 5 Users (0 votes)
RotelBrand
www.rotel.comWebsite
$2499.00MSRP
Pros
Cons
Summary
The Rotel RA-1592 combines the heart and soul of two of Rotel’s awesome separates, the RC-1590 stereo preamplifier and the RB-1582 MkII stereo amplifier, in a space-saving single chassis and is an outstanding component for the present and the future.
The Performance
Design/Ergonomics
Value
What people say... Login to rate
Order by: